Njal's Saga by Anonymous
My rating: 5 of 5 stars

”Gunnar got ready to ride to the Thing, and before he left he spoke to Hallgerd: ‘Behave yourself while I’m away and don’t show your bad temper where my friends are concerned.’

‘The trolls take your friend,’ she said.

Gunnar rode to the Thing and saw that it was no good talking to her.” 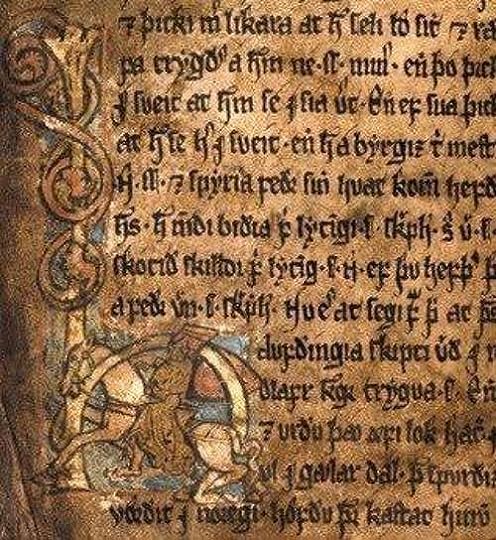 The events of Njal’s Saga took place between 960 and 1020 in Icelandic society and were written about in the thirteenth century. What was so unexpected for me was to discover, in such an ancient culture, the power that women had in, what I assumed was, a patriarchal society. Before I started reading Icelandic sagas, I had the image in my mind of the stereotypical, he-man, Viking Icelander, who ruled his home with an iron fist. That was not the case at all.

Hallgerd was famous to scholars of the sagas because she was such a diabolical character. She took any slight against her honor very seriously, meddled in others affairs without fear of impunity, manipulated, connived, and ultimately cost seven men their lives in a feud with Bergthora, the wife of Gunnar’s friend Njal. There was an inordinate amount of goading by women of their husbands in the sagas to push men into conflicts to defend family honor. The women, for the most part, did not really come off that well. They were depicted as shallow, petty, and quite willing to start an all out blood war over some perceived insult, even if the slight was unintended.

If a man did raise his hand to his wife, he risked having her burly male relatives appearing on his threshold to give him an attitude adjustment.

Most disagreements between men, some of them caused by women, were settled at a gathering called Althing. Men would get together and discuss who did what to whom and how much compensation was expected to be paid to make up for the loss of a life or of property. Again, surprisingly more civilized than anything I would have expected. Because of the alliances between people, either through blood or marriage or friendship, blood feuds were taken seriously. If things were not settled amicably between families, all of Iceland could find themselves in a civil war.

In these sagas, there were several moments when things became very precarious. As Hallgerd and Bergthora sparred with one another and convinced either their relatives or men who worked for their husbands to kill someone from the other family, the possibility of a savage blood feud erupting became precariously plausible. If not for the peaceable nature of their husbands, even more lives would have been lost as these women conducted their own bloody chess match where the pawns were men’s lives. Njal and Gunnar kept passing the same bag of silver back and forth as compensation for the deaths of their kinsmen to keep the peace.

Njal was considered one of the wisest men in Iceland, but though many came to him for consul, including Gunnar, his own sons frequently avoided asking him for advice, which eventually led to disaster. ”’I’m not in their planning’ said Njal, ‘but I am seldom left out when their plans are good.’”

Gunnar was level headed and anticipated problems before they actually materialized, but found himself often unable to stop the consequences. He was so mild mannered, but once his ire was raised he could become a fierce and formidable warrior. I really grew to appreciate his character as his story was told.

Throughout the sagas were foreshadowings or prophecies of what the future would hold. When Thorvald, son of Osvif, decided to marry Hallgerd, yes that Hallgerd, the future wife of Gunnar, his father couldn’t help but feel the match would be a costly one for his son. ”’Her laughter doesn’t seem as good to me as it does to you,’ said Osvif, ‘and the proof of this will come later.’”

Hallgerd had a couple of marriages before Gunnar and was known for being difficult to get along with, but she was beautiful, and men continued to be dazzled by her appearance and thought they could handle her conniving and manipulations.

Despite the very civilized manner with which compensation was handled in this society, there were still plenty of points in the saga where bloody conflict broke out, and there was much lopping of hands, arms, legs, and heads off. Skulls were split. Torsos were skewered. Scars were made. One of my favorites was when:

”’This is the first time I have laughed since you killed Thrain.’

Skarphedin said, ‘Then here’s something to remember him by.’ (Terminatoresque)

He took from his purse one of the molars he had hacked out of Thrain and threw it at Gunnar’s eye [different Gunnar from the main character] and knocked it out onto his cheek. Gunnar then fell off the roof.”

Or how about this encounter with THE Gunnar.

”Gunnar saw a red tunic at the window and he made a thrust with his halberd and hit Thorgrim in the waist. The Norwegian lost his grip on his shield, his feet slipped and he fell off the roof and then walked to where Gizur and the others were sitting on the ground.

Gizur looked at him and spoke: ‘Well is Gunnar at home?’

Thorgrim answered, ‘Find that out for yourselves, but I’ve found out one thing--that his halberd’s at home.’

Then he fell down dead.”

I’ve heard that some people find these sagas tough to read. Within a few pages, I found a rhythm with the way the stories were told and within a few chapters I was caught up in the lives of Gunnar and Njal. The introduction was a great prep for reading the sagas and provided me with insights that helped me enjoy my reading even more. There were many creatively described, bloodthirsty moments as well as some detailed legal proceedings that confirmed for me the importance of laws to balance the scales between the strongest and the weakest. This Icelandic culture around 1000 AD was a society trying to evolve away from their bloody, barbaric past and move toward a civilisation where every life was precious, and the arts could be appreciated as much as the glitter of a sharp sword blade.

Also see my review of The Saga of the Volsungs

and my review of King Harald's Saga

Posted by JEFFREYKEETEN at 9:19 AM No comments: