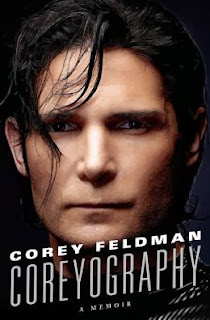 Coreyography by Corey Feldman
2013
Reviewed by Diane K. M.
My rating: 4 out of 5 stars

Once you get past the ridiculous title and intense cover photo, this is a good memoir. I read very few celebrity biographies, but Corey Feldman's appealed to me because I grew up watching his movies. I loved "The Goonies" and "Stand By Me," and even the campiness of "The Lost Boys."

What I didn't know back then was that Corey's personal life was hell. His parents were abusive and neglectful, and for much of his childhood he was the sole breadwinner of the family. He had started acting in commercials when he was 3, and he worked steadily until he was a teenager. Both of his parents did drugs and Corey's paychecks were frittered away. If he lost an acting job, his mother would beat him. Once she beat him so hard that he blacked out. She also tormented him by constantly telling him he was fat and ugly, and that he was klutz.

Corey was so miserable that he tried to kill himself. When he was 12, he swallowed a bottle of aspirin. Later he found one of his grandfather's guns and came close to pulling the trigger, but he couldn't go through with it.

The first time Corey slept over at a friend's house, he was shocked when the boy's parents tucked his friend in at bedtime and said they loved him. Corey realized what he was missing and that his family wasn't normal. He often cried himself to sleep and wished he could escape. Eventually he started experimenting with drugs and alcohol, which set him on a path to addiction and gave him a bad reputation.

As if that wasn't awful enough, Corey wrote about how he was frequently molested by older men, and said pedophilia is a serious problem in the entertainment business. His longtime friend and fellow actor, Corey Haim, was raped on a movie set when he was just 11. In a disturbing description, Feldman looked at a photo from his 15th birthday party and saw that there were five different child molesters in the picture, along with himself and Haim. He said they were surrounded by "monsters." Feldman said he later tried to bring charges against one of his abusers, but the statute of limitations had run out.

One of Corey's childhood idols was Michael Jackson, who became a good friend. Corey's home life was so screwed up that Michael's house was a safe haven for him. The memoir has several sweet stories of hanging out with Michael, going to Disneyland with him while wearing a disguise, and attending Michael's elaborate parties. Years later, when MJ was accused of molesting children, Corey spoke up in his defense. In 2001, Michael broke off their friendship when he heard a rumor that Corey was writing a book about him, which Corey denied.

Hollywood is so far removed from my world that I had never seriously considered the plight of child actors. It's just not fair to put kids under such pressure to earn a living and support a family. When parents ask Corey for advice on how to get their child into the movie industry, he tells them to "get these kids out of Hollywood and let them lead normal lives."

I'm glad I read this memoir, even though I'll never again be able to watch those beloved 80s movies the same way. Corey tells some good behind-the-scenes stories about making "Gremlins," "The Goonies," "Stand By Me," and "The Lost Boys," and fans will probably appreciate this book. But the details of his abuse and neglect are very disturbing and sensitive readers should be warned.

Corey closes the book on an upbeat note, saying he's been sober for years and he's happy to have a son, Zen, who is now 8, and is still focused on his movie and music career. He hopes that talking about his abuse may help prevent other children from the same fate.

Posted by DianeLibrarian at 8:00 AM No comments:

History Is Important, You Guys 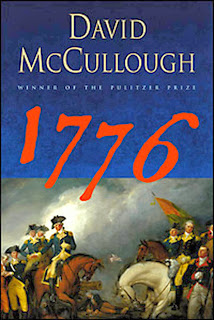 There are several reasons why I think this book is important, and it has a lot to do with the state of our schools. You've probably heard that public education in America is becoming more of a shambles each decade. I work at a community college and often feel like I'm on the front lines of this battle. While we have a number of good students, we also have a fair number 18- and 19-year-olds who simply aren't prepared for higher education and who, if the economy weren't so degree-oriented, probably wouldn't choose to go to college at all. A number of factors have been blamed for the decline of American schools, but one of the biggest culprits in my opinion is the overemphasis on standardized testing, especially as codified by the dreadful No Child Left Behind Act.

Both students and teachers have complained that high schools place so much emphasis on memorizing facts for the annual tests that it leaves little room for critical thinking, or interesting stories of history and literature, or anything else that makes learning fun and inspiring. I think this is a travesty, and it's not just the students who are being cheated — it is all of society, because without an educated citizenry we are lost.

Every time I see the title of McCullough's book, 1776, it reminds me of this issue because of an incident in a colleague's classroom. An English professor was making a point about how people today rely so much on their smartphones and the Internet that no one bothers to remember anything anymore because they assume they can just Google it. The professor pointed out that this lack of internal knowledge can hinder understanding and complex thinking. As an example he asked his students when America was founded.

There were about 30 students in the class, and none of them knew. The professor said, "Seriously? You don't know when our country was founded?" After a few more moments of silence a student meekly raised his hand and said, "If we didn't have to memorize it for the test, we probably don't know it."

OK, boys and girls, America was founded on July 4, 1776, when the Declaration of Independence was approved by the Continental Congress. This event happened in the midst of the American Revolutionary War, which is the focus of McCullough's book.

I wanted to read 1776 for several reasons. First, I had loved McCullough's biography on President Harry Truman and was eager to read more of his books. Second, it has been almost 20 years since I was in an American history class, and I wanted to revisit the details of how my country was founded. The stories, myths and legends about each nation are passed through the generations and become part of someone's culture and identity. I don't think these stories should be forgotten.

The book focuses on battles with the British between 1775 and 1777. It opens with a quote from a letter written by General George Washington in January 1776: "The reflection upon my situation and that of this army produces many an uneasy hour when all around me are wrapped in sleep. Few people know the predicament we are in."

Reading this book reminded me of how fragile America's independence was. Few of the "rebels" had military experience. Weapons and gun powder were in short supply. Because the colonial men had volunteered to fight, some resisted following military orders and didn't understand army discipline. Plus, the Brits controlled the sea. But for a few lucky turns of fate, the British might have won the war. McCullough concluded the book with this summation: "Especially for those who had been with Washington and who knew what a close call it was at the beginning — how often circumstance, storms, contrary winds, the oddities or strengths of individual character had made the difference — the outcome seemed little short of a miracle."

My favorite stories in the book were of the fortification of Dorchester Heights during the Siege of Boston, the Battle of Long Island and how the colonialists managed to retreat the entire Army in one night, and Washington's crossing of the Delaware. McCullough weaves a pleasant narrative and makes long-ago events seem very real. I liked his inclusion of quotes from letters, and the details of each military strategy, including how the weather was that day. And his description of Washington made me want to read a good biography about him.

I listened to this on audio CD, and McCullough is an excellent narrator. I highly recommend it to fans of history. Hooray for lifelong learning!
Posted by DianeLibrarian at 7:00 AM No comments:

Who Fears the Devil by Manly Wade Wellman
My rating: 3 of 5 stars

Silver John travels the Appalachian mountains, encountering all manner of strangness, with only his silver-stringed guitar for a companion...

I have a confession to make: I think 95% of fantasy stories are derivative and unoriginal. This collection is neither. Who Fears the Devil is the complete collection of Silver John short stories, 30 in number, ranging for three or four paragraphs to fifteen pages. Silver John is a wandering balladeer, modeled after a young Johnny Cash, who wanders from one strange event to the next.

The first thing I noticed about the stories were how skilled Manly Wade Wellman was at rendering Southern dialogue without making the speakers seem stupid. Once I dug in, the book was hard to set aside for too long and I'm not a big fan of short stories by any means.

The best way to describe the stories would be to call them American fantasy. The stories explore different aspects of Southern and mountain folklore, much having to do with witches, ghosts, demons, and other supernatural creatures. The line between fantasy and horror is blurred in some of them while others are pretty humorous. Silver John outwits supernatural beasties, encounters a giant, a house that's acutaly a living organism, and other things too odd to mention, all the while playing songs on his guitar and singing.

If you like fantasy that isn't derived from Tolkien, you could do a lot worse than spending a few evenings with Silver John.

The Old Gods Waken by Manly Wade Wellman
My rating: 3 of 5 stars

Silver John is back in a full length novel. If you've read Who Fears the Devil, you know what to expect. The Old Gods Waken reads like an expanded version of a Silver John short story. All the things I liked about the Silver John short stories were here: Silver John himself, his bits of lore, and ancient evils lurking just around the corners of the Appalachian mountains.

The supporting cast was a little ahead of its time. Reuben Manco could have easily been a stereotypical Indian character and it was nice to see him mocking such stereotypes. Holly was a much stronger character than most female characters of the period, back when women in pulp stories were either victims or bait. The Voth brothers were suitably creepy and I loved how Wellman wove the Raven Mockers of Indian mythology into a story about druids.

It wasn't all roses and sunshine, though. I felt like parts of the story were a little on the convenient side and I didn't think the writing was as good as it was in the short stories in Who Fears the Devil.

Really, no big complaints. It was nice to read about Silver John again. I'd give it a 3.5 if I could.

Still on Goodreads
Posted by Dan Schwent at 12:00 AM No comments: