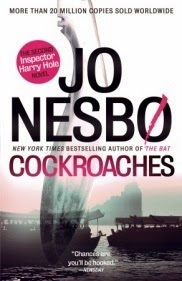 
I confess that I was pleasantly surprised by this book. It’s the second in Jo Nesbo’s series featuring Norwegian homicide detective Harry Hole, and as those who follow the series know, for whatever reason, Nesbo’s publishers did not release the books in order here in the U.S. Rather, they jumped into the middle of the series first. I assumed that this was because they felt that the first couple of books were not as good as the latter ones and so wanted to put Nesbo’s (and Harry’s) best foot forward first.

The book opens when Norway’s ambassador to Thailand is found stabbed to death in a sleazy motel in Bangkok, while apparently awaiting the arrival of a young prostitute. This is not the sort of thing that reflects favorably on an ambassador or on the government that posted him to Thailand. The Powers That Be in the Norwegian government are much more concerned about avoiding a scandal than they are in finding the guilty party, but they have to put up a good front.

To accomplish these ends, the government assigns Detective Harry Hole to go to Bangkok and assist the locals in the investigation. Hole has just gained some notoriety for solving a difficult case involving the death of a Norwegian citizen in Australia and thus to all outward appearances, seems an ideal choice. At the moment, however, Harry can most often be found in an alcoholic daze and not at his detecting best. The expectation is that Harry will go to Thailand for a few days, drink himself into a stupor, and allow the locals to sweep the whole embarrassing incident under the rug.

Of course, as everyone who’s ever read a crime novel understands, that’s not about to happen. Our intrepid hero will instead sober up and pursue the case to the ends of the earth, or at least to the ends of Thailand, no matter where the chips may fall. And in the process, of course, he will exasperate the hell out of his superiors.

The ambassador’s death turns out to be a murky and complex case, involving a large cast of intriguing and well-drawn characters. Hole is a great protagonist, and there are a lot of unexpected twists and turns. There are also a lot of interesting insights into the people, culture and geography of Thailand. The story moves along at a good clip, and all in all, it was a very entertaining read. As I suggested in my review of The Bat, it does seem a little odd that a series involving a Norwegian detective would begin with two books set in foreign countries, but in the end, I enjoyed them both and am relieved that I can finally read all of the books in this series in order. I’m going to enjoy Harry’s journey.
Posted by James L. Thane at 9:08 AM No comments:

Snuffed Out My Desire To Read More Palahniuk

Snuff by Chuck Palahniuk
Reviewed by Jason Koivu
My rating: 3 of 5 stars

Is this titillation pure and simple, or is this an important truth? To me, it seems filled to the brim with both. Like moths to light, certain kinds of people seem drawn to join the porn industry. In evening news programs like 60 Minutes they've often been depicted as having preexisting "damaged" traits. Palahniuk plays this up to the hilt and then takes it a step further, going into the Hollywood world for examples of actors and actresses drawn to the flame of stardom, some on the cusp of making it only to fall into the necessity of making ends meet. But Palahniuk casts about too far in piling on the shocking examples of movie industry mishaps, which drift so far from the point as to nearly devolve into the sort of sensationalistic headlines found on the cover of gossip mags in the counter aisle.