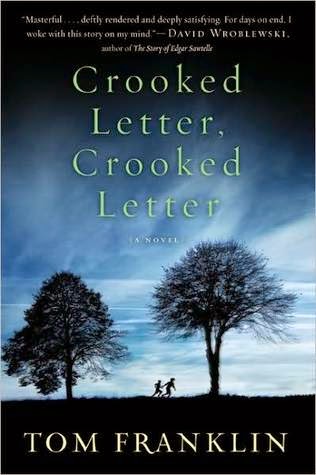 This is a very well done atmospheric novel set in rural Mississippi. The story is told in scenes that alternate between the 1970s and the present day. At the heart of the story are two men, one white, the other black, who for a brief period of time as boys were secretly close friends in a time and place where their friendship, if public, would have only brought them trouble.

The white man is Larry Ott, the only child of a lower class family. His father was a mechanic who seemed to have little patience for or interest in his son. Even as a boy, Larry was quiet and withdrawn. With no athletic or social skills, he had no friends at all, was ridiculed at school, and gradually withdrew into a world of books. In high school he had only one date, which ended tragically when the girl he had taken out disappeared and was never seen again.

The entire county believes that Larry raped and killed the girl and then buried her body. Since the body was never recovered and since there was no physical evidence to connect Larry to her disappearance, he was never prosecuted. But now derided as "Scary Larry," he is even more ostracized and his family disintegrates in the wake of the tragedy.

Twenty-five years later, Larry is still living in the family home, alone now, tending to the chickens and still reading his books. Every day, he drives into the garage he inherited from his father and waits in vain for any customer to appear, but no one in the small community will have anything to do with him. Then another young woman disappears and all eyes turn to Larry as the obvious suspect.

Larry's black boyhood friend was Silas Jones, a gifted athlete known as "32," the number he wore on his baseball uniform. Silas was raised as the only son of a black single mother and never knew who his father might have been. For a brief time, Silas and his mother lived in an abandoned shack on property owned by Larry's father, which is how the two boys briefly became friends.

Shortly after the first young woman went missing, Silas left the area to go to college and pursue his dream of a career in baseball. Now he's back, serving as the town constable, and he sees no reason to make an effort to renew his friendship with Larry Ott. But the disappearance of the second woman will throw the two men together again, whether they like it or not.

The crimes at the heart of the story serve principally as a backdrop for the larger story of the relationship between Larry and "32," and watching that story unfold is a very rich and rewarding reading experience--one of my favorite books of the year thus far.
Posted by James L. Thane at 9:14 AM No comments:

Hell Town is the continuation of a series by William W. Johnstone following Frank Morgan, a dead-eye gunfighter once known as "The Drifter" but now working as the sheriff of Buckskin. Johnstone delivers just what you'd expect from a western: shoot outs; outlaws; an either righteous or misunderstood sheriff; double dealings; saloon fights; a heap of colorful characters.

Buckskin, this once boom-town-gone-bust, is about to boom again with the reopening of the local mines, which will bring prosperity as well as trouble. Not only does Morgan have to contend with the stubborn-as-a-mule young guns looking to make a name for themselves by taking out the fastest gun in the west, but he also has to manage the unruly practices of one mining company's brash and underhanded owner. Oh, and there's a band of outlaws with a deranged leader about to rain bullets and utter oblivion down upon Buckskin.

The writing is workman-like and, while it's nothing special, it's also nothing to complain about. There's enough period detail to make it believable for me. Johnstone does occasionally use some words and phrasings that stick out as being more modern. Some might find that jarring. I didn't have a problem with it.

With Johnstone it's action, action, action, a passing hint of romance, and then back to the action. The book reads more like a collection of short stories with an overarching theme. Another way to say it would be that the scenes are set up episodically, such as westerns traditionally often are. Quickly wrapping up a storyline, newly presented and completed all in one chapter, can make the scene's consequences seem, well inconsequential. The technique does however allow the writer to introduce a change of pace should the story be growing slow at any point. The end result is a fast-paced, fun read that you'll likely forget five minutes after finishing.

To say William Johnstone wrote a lot of books would be to say the ocean holds a lot of water. Johnstone wrote for only about 25 years, but penned around 150 books in that time. Those books were spread out over quite a few different series, his bio asserting that they fall into the western, horror and survivalist genres. Some are shorter than others, but if you're looking for a nice, long series of say 20 of more books, Johnstone might be your man. I know I'll be giving another of his works a go in the future!