”They were like guests at a surprise party waiting for your arrival and now you have entered the room---their room, not the real one around you---or so it mysteriously seems. The whole scene twinkles with expectation. That is the first sensation on the threshold of the gallery in the Prado where Las Meninas hangs: that you have walked into their world and become suddenly as present to them as they are to you. 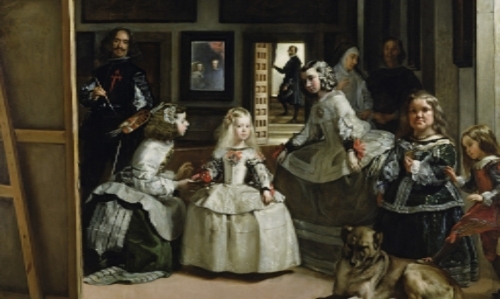 It has been twenty plus years since I was last in the Prado, but I do still remember this painting. It wasn’t a scene that would usually be of much interest to me. At first glance, there is nothing really going on in this painting, barring a princess getting ready for a ball or a dinner party or to meet some dignitaries from another court from another country. It would be easy to pass it by, except for the scale of the painting. It is huge. Instead of scurrying on past, I suddenly found myself trapped under the gaze of the painting. These people, all long dead but very much alive, are looking at me as if I just interrupted their activities by walking in the room. These sensations I felt that day all come back to me when I read Laura Cumming’s description above.

I, without intention, have fallen into 1656. Of course, in real life we can’t stare at people like I stared at the people in this painting. I think that at any second the little girl would lift a hand to her face and giggle, or Velazquez himself would raise an eyebrow at my imprudence. They are so guileless and welcoming. Velazquez has immortalized all these people from the dwarfs to the ladies in waiting, from the artist to the king and queen reflected in the mirror, as if everyone in this painting were, at least in paint, equal.

For Velazquez everyone is unique, and by him showing us their remarkableness, they become indispensible to the rest of us.

”He finds a Venus and a Mars in the humble people around him, sees a king as compellingly ordinary and is able to make an old man selling water seem like an ancient prophet. There is an extraordinary equality to his empathetic gaze.” 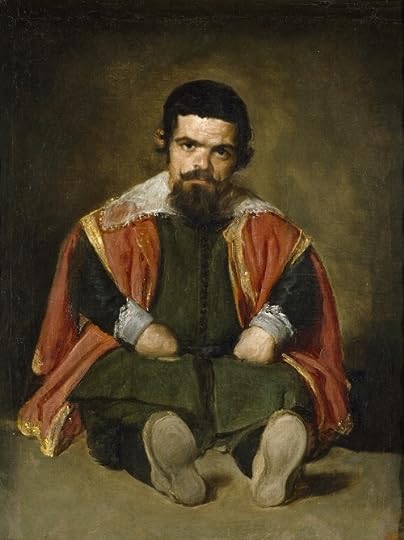 If Velazquez had only painted Las Meninas, he would have been immortal, but luckily for the rest of us, he shared his gift in a number of paintings, not enough, mainly because he became so successful in the court of Philip IV that his duties to the king, beyond just painting portraits, were taken up with tasks that would have been better left to others.

The story may have begun in the 17th century, but the second act happened in the 19th century when a bookseller by the name of John Snare bought a painting at a liquidation sale. Take it from me, booksellers are always trouble, and Snare was no exception.

Now just being in the book business, we can assume that Snare was “gently mad.” There is something about art, books, and race horses that take the gently mad to the certifiably insane. This painting, luminescent beneath the grime of dust and smoke, is of the Prince of Wales, the future Charles the first, significant in the fact that he is young, but sports the beard he grew while he was petitioning Philip IV for an alliance with his daughter.

In 1649, Charles is overthrown by Oliver Cromwell and his supporters and very publically beheaded. He wore two shirts to the execution so that a morning chill would not be misinterpreted as a shiver of fear. He put his head on the block and signaled the executioner he was ready by spreading out his arms. Regardless of whether history sees him as a good king or a terrible one, his courage in his last moments was incontestable.

He displays it and makes some money off people coming to see this painting by a Spanish painter rarely seen in England. Snare has a lien that doesn’t exist slapped against the painting by unscrupulous people in an attempt to steal and sell the painting before the court system can prevail. He survived that near parting with his precious; and yes, there is a bit of Gollum in Snare. He is later sued by an estate believing that the painting was stolen from a private collection. He goes bankrupt defending his right to own the painting, but even though he wins the court case, he leaves for America.

He doesn’t run away, like a normal man, with a young doxy. He runs away with a painting.

Snare leaves a wife and children. One child is born after he leaves. His paterfamilia responsibilities are superseded by his responsibility to art.

He could have sold the painting for a handsome sum and avoided bankruptcy. I can imagine he considered it, but who he is, by this time, is so defined by being the owner of this “Velazquez” that he can’t give it up. It would be like selling Secretariat or selling a building with your name on it or selling a Gutenberg Bible. You know that by selling something that precious that you will never be able to own it again.

Cumming not only expanded my knowledge of Velazquez exponentially, but also introduced me to a 19th century, mad as a hatter version of myself whom I understood completely. I knew that Velazquez was an important painter. I learned that at the Prado, when I laid my eyes on Las Meninas, the people of the Spanish court laid their eyes on me. He was such a humanist. He depicted dwarfs and poor people and famous people and royalty with the same deft brush strokes. He held no one up for ridicule, but showed each of his subject with the power of their uniqueness, evident for all to see.

He was a maestro.

”Even now one wonders how he could know where to place that speck of white that ignites a string of flashing glints across pale silk, how to convey the stiff transparency of gauze with a single dab of blue on grey, how to paint eyes that see us, but are themselves indecipherable. How could he lay paint on canvas so that it is as impalpable as breath, or create a haze that seems to emit from a painting like scent, or place a single dab of red on the side of a head so that it perfectly reads as an ear?” 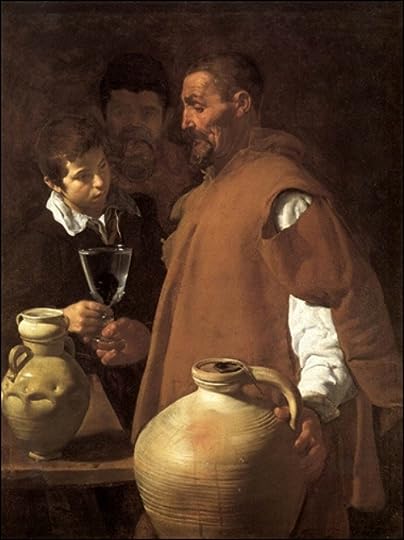 Velazquez sold this painting of The Water-seller, but then when he had the chance, he bought it back and kept it for the rest of his life.

It would have made everything so much easier if Velazquez had signed all of his paintings, but then the more that I get to know the man, the more I realize that he was saying something by not signing them. He was but an instrument of his talent. His paintings belonged to the world.

Posted by JEFFREYKEETEN at 11:16 AM No comments: