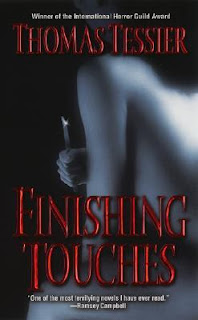 On an extended holiday in London, Dr. Tom Sutherland befriends a mysterious surgeon named Nordhagen and begins a wild affair with the doctor's exotic assistant, Lina. Seduced and completely enthralled by Lina, Tom can think only of being with her, following her deeper into forbidden fantasies and dark pleasures. But fantasy turns to nightmare when Tom discovers the basement laboratory of Dr. Nordhagen, a secret chamber where cruelty, desire and madness combine to form the ultimate evil.


I first came across Thomas Tessier's writing in the Hot Blood series, edited by Jeff Gelb and Michael Garrett. Eager for more of his creepy and erotic stories, I was thrilled to find a cheap used copy of Finishing Touches. This story is about a young American doctor, Tom Sutherland, who takes a few months off from his practice to travel, and meets up with an unusual cosmetic surgeon while drinking at a local pub. As Tom slowly gets drawn into the surgeon's dark and mysterious world, and becomes enchanted with the doctor's lovely assistant, he discovers a whole new world of dark, sensual, and sadistic pleasures that at first repels then fascinates him.

The story is competently written, suspenseful and disturbing. It started off slowly and built up tension, but I couldn't help but be let down by the "ultimate evil" Tom was supposed to confront towards the end.

Father Panic's Opera Macabre is a strange and unsettling little story about a historic novelist who becomes stranded in rural Italy after his car breaks down. Neil comes across an old mansion that is inhabited by a beautiful and lonely woman and her eccentric family.