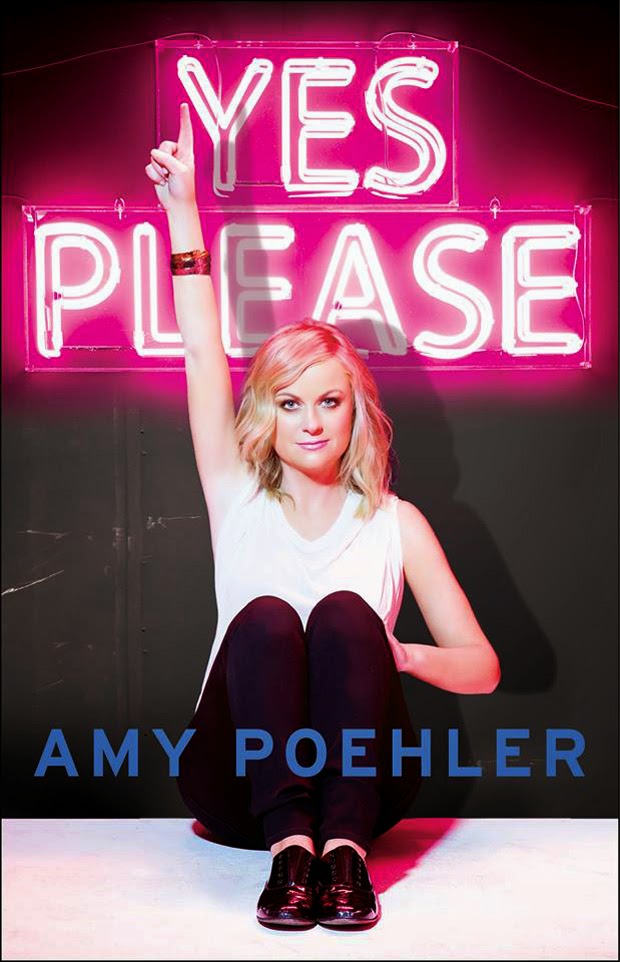 
I am probably not the only one who has a girl crush on Amy Poehler. She's funny, she's smart, she's sassy and she does good work.

But I hope my future best friend will forgive me when I say her book is less than great. "Yes Please" is a fun little memoir about Amy's childhood, how she got her start in comedy, and some good behind-the-scenes stories, but overall, it's scattered and not very deep. She briefly discusses her marriage and divorce to actor Will Arnett, but the focus is primarily on her career. My favorite chapters were about her years at "Saturday Night Live" and "Parks and Recreation," which is a favorite show of mine.

Early on, Amy discusses how difficult it was to write a book, and that she had to work on it when she had a few spare moments between jobs and taking care of her two children. It definitely felt like it was worked on it bits and pieces; it was not cohesive and some of the chapters even felt like filler.

I listened to this on audio, performed by Amy Poehler and several of her entertainment friends, including Seth Meyers, Carol Burnett, Mike Schur, Kathleen Turner, Patrick Stewart, and also some cameos by Amy's parents. I think I liked the book more on audio than I would have in print (similar to when I listened to Tina Fey perform her book "Bossypants," which was much more enjoyable than reading it). There were a few good quotes about friendship and show business and trusting yourself, and if I ever get a print copy from the library, I will revise this review and add those lines.

I think I would only recommend this book to serious Amy Poehler fans; some celebrity memoirs have deeper themes and can resonate with a wider audience, but I don't think this is one of those books. (Sorry, Amy. Can we still be BFFs?)
Posted by DianeLibrarian at 7:00 AM No comments:

Bernard, Wilson, and Toggle work at a prison graveyard on an island near an island prison. When Prisoner 489 is executed, they use the electric chair on him four times and put a plastic bag over his dead. But when he gets to the island for burial, he's not quite dead and in a foul mood...

I contributed money to the Kickstarter for this Dark Regions Novella by Joe Lansdale. I was not disappointed.

Prisoner 489 is the story of three men battling something that can't die. That's pretty much all I'm going to divulge of the plot. Imagine being trapped on an island with an unstoppable monster and you've got a pretty good idea of what sort of novel this is.

In just a few pages, Lansdale manages to establish the three workers who live on the island, Kettle, the man who brings them their supplies once a week, and Prisoner 489, who is more of a force of nature than a character.

Lansdale's writing is top notch but it took me a few pages to get into the story. Once the prisoner shows up, the story goes into high gear and the pages won't turn fast enough. As always, the story is told in Joe Lansdale's front porch style, making it an easy but compelling read.

The illustrations by Santiago Caruso add a lot to the story and I can't wait to see the finished product.

If you're looking for a horror novella to read this holiday season, Prisoner 489 will meet your needs, right up until he tears your leg off and beats you to death with it. 4 out of 5 stars.

The Milkman: A Freeworld Novel by Michael J. Martineck
My rating: 3 of 5 stars

When someone frames Emory Leveski for murder, his life goes down the toilet. McCallum, the detective assigned to the case, doesn't think Emory did it but doesn't have the budget to save him. But what does all that have to do with Sylvia Cho and her documentary about The Milkman, a rogue scientist who posts about milk quality all over the world?

This is one of those books I'm having a hard time formulating an opinion on.

First of all, I love the world The Milkman is set in. Imagine a world where the governments go into debt and are bought out by three corporations. Crimes are given an investigation budget based on the victim's earning potential for the company. Anything beyond that isn't cost effective. Everyone wears wristphones connecting them to the internet. Now that I type it, the world doesn't seem all that unfamiliar...

Ed McCallum is a cop who'd rather be an artist, investigating a crime he suspects is a setup from the start. Emory Leveski, one of the people responsible for the Milkman's reports, finds himself framed for murder. Sylvia Cho has her boss try to strong arm her into getting an abortion so she can work on the documentary. All the ingredients are pretty fresh.

So why can't I give this book a glowing review? Because I didn't think the ingredients were put together in a compelling fashion. The cases were almost completely unrelated until the end. Also, the shifting points of view were so frequent that the only character I really got attached to was McCallum, and that's likely because detective fiction is my bread and butter. Also, did I really need to know the prison rapists used a screwdriver handle coated in butter to lube up Emory's asshole before they went to town on him? No, I think not.

Still, it was a better than average read. Martineck did a good job at doing the world-building without making me feel like I was reading an encyclopedia. The murder victim seemed like an afterthought in the proceedings, though.

All things considered, I liked The Milkman more than I disliked it and I hope Michael Martineck revisits this dystopian corporate world. Three out of Five stars.