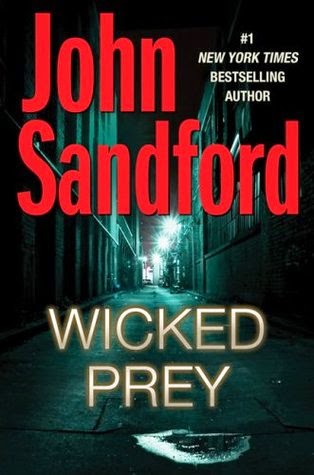 It's the summer of 2008, and the Republicans have selected Minneapolis as the host city of the convention where they will nominate John McCain for the presidency. Inevitably, the convention will bring to the Twin Cities, in addition to all the politicians, a gaggle of protestors, potential assassins and terrorists, street people, con artists, grifters and other assorted crooks. The cops will have their hands full, as will Lucas Davenport's Bureau of Criminal Apprehension.

Slipping into town amidst the lesser criminal talents is a high-powered gang of robbers headed by Rosie Cruz and Brutus Cohn. They have several targets mapped out, including a number of political operatives who will be sitting in their luxury hotel rooms with suitcases full of cash--in each case, over a million bucks. This is dirty money that will be passed out in blocks of untraceable cash to be used for paying street expenses during the campaign. The men with the money are sitting ducks and the best part is that, once the crew has ripped them off, they can't even report the crime because what they're doing is illegal.

Davenport, though, is alerted to the presence of the crew in town and begins the process of trying to track them down. But it won't be easy, especially in the general chaos that surrounds the convention, and when bodies start falling unexpectedly, the task becomes all that more urgent.

And, as if Davenport weren't busy enough, an old nemesis and Davenport's young ward, Letty, combine to cause even more trouble. Some years earlier, a small-time pimp named Randy Whitcomb, disfigured one of Davenport's snitches, who was a hooker in Whitcomb's stable. In retaliation, Davenport beat Whitcomb within an inch of his life and for that Davenport was forced to leave the Minneapolis PD, at least temporarily. Later, Whitcomb was shot and paralyzed by another police officer, but Davenport was on the scene for that development as well, and Whitcomb has been seething with rage ever since.

Now confined to a wheelchair and attended to by his one remaining hooker and a drug-addled sidekick, Whitcomb decides to take his revenge on Davenport by attacking Letty. Letty, who is now fourteen going on thirty-seven, trips to the plan. She's afraid that if she tells her father, Lucas will go ape-shit and kill Whitcomb, something that she thinks would not be good either for Lucas or for herself. She thus decides to handle the Whitcomb problem on her own.

All of this makes for a hugely entertaining book that's at times both terrifying and hilarious. Sandford is the master of mixing these elements, and as usual, the characters and dialog are great; the plot rolls along at a rapid clip, and
Posted by James L. Thane at 10:00 AM No comments:

Coal Run by Tawni O'Dell
Reviewed by Jason Koivu
My rating: 3 of 5 stars

This is the book that broke my desire to be a part of the local book club scene.

"Book club scene" sounds so hip, doesn't it? Well, the only thing hip about the book club I was involved in was the talk about broken hips the old ladies in the group kept on about. If I had to guess at the median age of the members, I'd say it was somewhere around 105 years old.

Dangerously close to a romance novel at times, Tawni O'Dell's Coal Run was still enjoyable enough for me not to hate myself for having read it. Maybe it was because there's talk of football in it, I don't know.

The female author did a credible job creating her male characters, but surprisingly her female characters are fairly cardboard-esque. They were stereotyped tools for the male main character to use or be manipulated by through the course of the novel.

The story itself, a man fighting his demons, was enjoyable and I liked the local-color details of the small Pennsylvanian coal mining town, but all in all this is disposable stuff.

It was a book club pick and there's no way in hell I would've read it on my own. So, by the time I was done and realized the time I'd wasted on it, I was left with a sick feeling in my gut...like I had a fever and the only prescription was no more book club.

The American Night: The Lost Writings, Vol. 2 by Jim Morrison
Reviewed by Jason Koivu
My rating: 3 of 5 stars

Welcome to the American Night...

I didn't understand what it meant and yet it meant so much to me, this immature 18-year-old still finding out about the world by inserting himself into the universe of others. Along came Jim Morrison, singer/poet, a forever-young manchild...so appealing to a youth entering adulthood unwillingly.

Morrison's words, scribbled out in notebooks upon rooftops in Venice, California, would become the basis of lyrics to the inflammatory songs created by late '60s rockers The Doors.

And many of those scribbles are found within The American Night: The Lost Writings, Vol. 2: The End, The Soft Parade, Moonlight Drive, Soul Kitchen, L.A. Woman, When the Music's Over.

Perhaps it's that familiarity which made this second volume of Morrison's work more enjoyable to me. I already knew and loved the entire Doors catalogue and here, now and then, popped up the lyrics to one of their tunes. And there was more familiarity to latch on to, as seen in live performances, such as his "rock opera" the Celebration of The Lizard...

Morrison and his words could be oh so very melodramatic.

He seemed to intentionally revel in the bizarre, if for no other reason than to shock. Take for instance Lament for the Death of My Cock (which I think I used for a school English project my senior year):

How to get death
On the morning
show

T.V. death
which the child
absorbs

death-well
mystery
which makes
me write

Slow train
The death of my cock
gives life

It goes on and on like this. Silly stuff. Never did figure out the point of breaking up the lines like that. Did he think he was writing out the lines of a song? Perhaps and why not, some of this tripe did get turned into songs...well, the better stuff anyhow. However, much of this needed editing to say the least and most should never have seen the light of day. It's the stuff of teenaged angst. What artistically-minded kid didn't fill up a notebook or two with their unintelligible, overly emotional ramblings? I filled six, myself!

If you've read down this far, you're clearly a fan (or someone with some time on your hands) so I suppose I could recommend this book to you. I might also recommend The Doors' album An American Prayer. It takes snippets of spoken word by Morrison from the compositions included in this book, so you get to hear him reading them in the way he intended. Unfortunately, the remaining Doors members decided to add their own backing tracks, jam sessions and incidental noise to the background, which was not in keeping with Morrison's original intention. Eh, it is what it is.