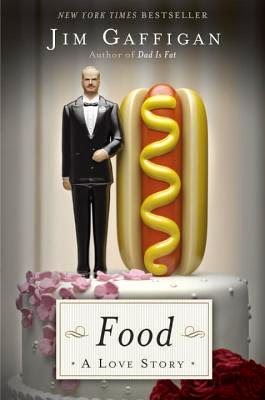 Warning: Do not read this book when you are hungry. The discussions of pizza, cheeseburgers, bacon, doughnuts, steak, and all kinds of yummy foods could break your diet.

Comedian Jim Gaffigan loves food and talks a lot about it in his standup routines, including his popular bit on Hot Pockets. This fun book talks about the different foods he likes and dislikes, and his favorite restaurants around the United States. I was tickled to note that I had eaten at a few of the places he mentioned, and filed away other recommendations for future trips.

He has a good sense of humor about being overweight, and says he never takes food or restaurant advice from a skinny person because they aren't passionate enough about food to overdo it. He also takes issue with the dieters' claim that Nothing tastes as good as thin feels. "I for one can think of a thousand things that taste better than thin feels. Many of them are two-word phrases that end with cheese. Even unsalted French fries taste better than thin feels."

I think my favorite section in the book is when he shows a map of the U.S. and has divided it into different food sections, such as Coffeeland in the Northwest, Seabugland in the Northeast, Steakland in the Plains, Wineland in Northern California, Mexican Food land in the Southwest, Super Bowl Food land in the Midwest, etc. He reserves the distinctive name "Food Anxiety Land" for New Orleans, because the food there is so good and he whenever he visits he panics because he feels he never has enough time to eat enough of their delicious food.

I also liked that Gaffigan doesn't call himself a foodie; instead, he prefers the term "eatie."

"I don't have anything against foodies. I appreciate their love of food and I envy their knowledge and culinary escapades, but I'm generally satisfied with what I've been eating. Foodies seem to be on a never-ending search for new restaurants and interesting dishes. I don't have an insatiable desire to discover what makes something taste good or to find exotic combinations ... There is plenty of regular food I still want to enjoy."

This is an amusing and enjoyable book and I frequently laughed out loud while reading it. I recognized some parts from his standup routine, but it was still funny in print. My one criticism is that it is a bit long for a humor book — it's more than 350 pages. It was my mistake that I tried to read it straight through, when it's better to give comedy a little time to breathe, like wine. Trying to gulp a humor book down in one sitting means it will get repetitive and taste like slop. However, I would still recommend this to anyone who likes Gaffigan's humor or who also likes American food; just don't try to imbibe it all at once.

Now if you will excuse me, I need to go order some pizza.
Posted by DianeLibrarian at 6:00 AM No comments:

The Secret History by Donna Tartt
My rating: 4 of 5 stars

When Richard Papen joins an exclusive group of Classics students, he has no idea of the secret world of drugs, alcohol, and violence he's about to be thrust into. When one of the students winds up dead, can the rest cope or destroy themselves?

Yeah, it sounds like the crime books I usually read but it's a whole lot deeper than that. This is one of those Big Important Books, full of things like themes and literary references. Like Jim Thompson getting the sauce under control and writing about college kids.

While Donna Tartt tarts it up a bit, the plot is straight out of the noir playbook. Rich kids get in trouble, cover up a murder, commit another murder to cover up that one, and continue down the path of self-destruction. Fortunately, Donna Tartt can write the shit out of things and the whole is much greater than the sum of its parts.

The characters and the writing set it apart from many similar books. The characters were a well-realized bunch of overly-privileged college brats and their disintegration was very well done. Tartt's writing was several notches beyond what I expected.

That being said, I did not love this book hard enough to crush it to death against my manly chest. While the writing was good, it took forever for things to actually happen. I thought it was well done but I'm not precisely sure I actually liked it. Another thing about it that didn't set my world on fire is that I've recently read The Likeness and felt it was a little too soon to read about such a similar group of asshole college kids.

All things considered, I guess I was enraptured enough to give this a four. It was good but probably overwritten for what it was.