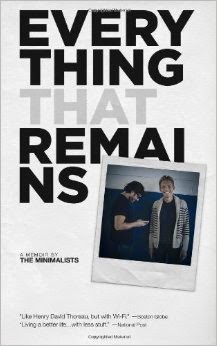 Everything That Remains by The Minimalists
2014
Reviewed by Diane K.M.
My rating: 4 (rounded up) stars out of 5

We have a love-hate relationship with stuff. We love wanting things -- it can be so satisfying to acquire and collect our treasures! But we also have to store all of that stuff. We have to clean it and organize it and maintain it.

Minimalists argue that if we have less stuff, our lives will be richer and happier. We will spend less time cleaning and worrying about our things. We will have more satisfying relationships. We will not have to work as hard or have as much debt because we will be spending less money. Clearing out everything that is unnecessary will free up room in our lives to be more mindful of ourselves and of others.

Joshua Fields Millburn and his friend, Ryan Nicodemus, run a blog called The Minimalists, and this book is a memoir about their journey to simplify their lives. (Minimalism seems to be the trendy new term that was just called Simple Living in the '90s. New century, new term!)

Joshua and Ryan both had high-paying jobs in the telecommunications industry. They worked long hours and had a lot of stress. After Joshua's mother died in 2009, he had to clean out her house and was shocked at how much stuff she had collected. His first thought was to box it all up and pay to have it stored somewhere, but then he realized how ridiculous and expensive it would be. So he hunkered down and sorted through all her rooms of stuff, getting rid of everything but a few photographs and mementos.*

And then, his marriage ended. In a new apartment, Joshua decided to start paring down his stuff, too.

"I started small, asked myself: What if you removed one material possession -- just one -- from your life each day for a month? What would happen? The result: I unloaded way more than thirty items in the first thirty days. Like way, way more. It became a kind of personal challenge, discovering what I could get rid of, what I could get out of my way, how many unneeded things I could remove from my hoard. I searched my rooms and closets, cabinets and hallways, car and office, rummaging around for items to part with, retaining only the things I needed."

It took several months, but Joshua whittled down his things to just the necessary items. He got rid of all of the "just in case" things that he had been saving. He digitized his photographs. He digitized his CDs and movies. He cleaned out his closet and kept only his favorite clothes. It was close to an "everything must go" project. He even changed his relationships, and ended up leaving the job that had been making him miserable.

"We hold on to jobs we dislike because we believe there's security in a paycheck. We stay in shitty relationships because we think there's security in not being alone. We hold on to stuff we don't need, just in case we might need it down the road in some nonexistent, more secure future. If such accoutrements are flooding our lives with discontent, they are not secure."

Ryan became inspired to minimize his things after he saw how much happier Joshua was. Ryan tried a slightly different project: He packed up all of his items in boxes as if he were moving, labeled everything, and stacked them in his living room. Then he spent 21 days unpacking only the items he needed. For example, the first things he unpacked were his toothbrush, his bed sheets, a few dishes, etc. At the end of the 21 days, he had only unpacked about 15 percent of his stuff. He got rid of everything that was still packed in the boxes. WOW.

This book was inspiring to read and even kicked me into serious decluttering mode. (I've already taken numerous bags of things to goodwill.) My complaint is with the writing; Joshua can be a bit florid, and the structure of the book was also frustrating. It's set up as a collection of essays, but Ryan was allowed footnotes; his comments are in the back of the book, which required a second bookmark. While Ryan had a few good points, such as his diary about his 21-day project, a lot of his interjections were unnecessary and I got annoyed flipping back and forth.

However, I appreciated the thoughtfulness of the book and because it was so inspiring, I'm taking my 3.5 rating and rounding up to 4.

*This is just anecdotal evidence, but I have heard similar stories from friends about how the death of a parent or grandparent has jolted them into decluttering their own lives, because they had to sort through all of their relative's stuff. All of those "treasures" can end up being a burden for those left behind.

Exodus Lost by S.C. Compton
My rating: 4 of 5 stars

When the Spaniards arrived in the New World, the Aztecs treated them like returning gods, mistaking them for Quetzalcoatl and handing over their empire. In Exodus Lost, S C Compton asks why.

In my younger days, I loved bits of possible history like this book so it was a no brainer when it popped up on my FreeBooksy email a couple weeks ago.

In Exodus Lost, S.C. Compton builds a convincing case that people from the Middle East visited the Olmecs and their descendants in what are now Central and South America. For instance, both cultures used the same laborious process to make purple dye from sea snails. Both the Quetzalcoatl and the Egyptian Pharaohs use the feathered serpent as a symbol. Throw in shared alphabetic characters and commonalities in language and mythology and it's off to the races.

But wait! There's more! Tobacco and cocaine, both substances native to the New World, has been found in Egyptian Mummies. Both the Egyptians and Mezoamericans used a calendar with the same amount of days. Both had dog headed gods of the Underworld. And architectural similarities! And similar religious practices!

Compton postulates that Quetzalcoatl was Egyptian and that both the Hyksos and the Nubians visited the new world in antiquity and does a pretty convincing job, in my opinion. There were so many similarities that I had a hard time discounting what he was saying as mere coincidence. Since Thor Heyerdahl crossed the Atlantic in the 1970's on a boat made of reeds, how hard is it to believe that other cultures did the same thing?

There are some lengthy digressions in the book but they eventually tie back into the main topic. There was probably more Hyksos talk than was necessary and there was a lot of things linking some Old Testament events to real world history but I found those fairly interesting. There's a meteor crater beneath the Indian Ocean miles across that Compton theorizes shot so much water vapor into the stratosphere that it caused the Bibical Flood, which I found intriguing.

One tidbit I learned that's not integral to the book but I found interesting/horrifying was that the Olmecs practiced penile bloodletting as part of religious ceremonies! That's not even the worst part. The worst part is that the chosen technique, using a stingray's barb, was hard to remove without extreme pain so it was easier just to push it all the way through and pull it out the other side. Try forgetting that image.

Four out of five stars. If you're interested in outside influences on Mezoamerican culture, I would highly recommend giving this a shot.

Clerical Error by Robert Bevan
My rating: 3 of 5 stars

While adventuring, Dave the dwarven cleric displeases the gods and finds himself unable to use his holy abilities. Will he regain them in time to stop a goblin horde from killing Tim, Cooper, Julian, and himself?

The Caverns and Creatures gang is back for another short adventure, this one involving a mass of zombie goblins (gomblies) and a cleric who is having a rough patch of luck, what with having an unholy symbol on his forehead and being the target of endless rats and roaches.

Robert Bevan's vulgar brand of geek humor is present and keeps the story flowing. Dave figures out how to please the gods in a pretty novel way and everything is right with the world.

It's a pretty short story so that's about all I can say without blowing the best jokes. Three out of five stars.