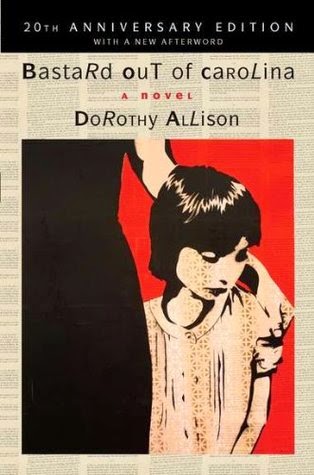 Bastard Out of Carolina by Dorothy Allison
1992
Reviewed by Diane K.M.
My rating: 3 out of 5 stars


This book is beautifully written, but I did not enjoy it. It is a grim story of poverty, child abuse and rape. The prose may be lovely but the drama is harrowing.

"Things come apart so easily when they have been held together with lies."

Bastard Out of Carolina is the story of Ruth Anne Boatwright, but everyone calls her Bone. She was born out of wedlock and doesn't know who her daddy is. Her mama tried several times to get the word "illegitimate" removed from Bone's birth certificate, but the courthouse clerk just smirked at her.

"Mama hated to be called trash, hated the memory of every day she'd ever spent bent over other people's peanuts and strawberry plants while they stood tall and looked at her like she was a rock on the ground. The stamp on that birth certificate burned her like the stamp she knew they'd tried to put on her. No good, lazy, shiftless. She'd work her hands to claws, her back to a shovel shape, her mouth to a bent and awkward smile — anything to deny what Greenville County wanted to name her."

Her mama eventually married a man named Glen, and that is when Bone's real troubles began. Glen couldn't keep a job or pay the bills, so the family often went hungry and had to move a lot. Glen also had a fierce temper and started molesting and beating Bone, and she didn't know what to do. Her mama seemed to know Glen disliked Bone, but she said she loved him so much that she wouldn't leave him. After several years of abuse, Bone's aunt saw the bruises on her, and she was finally taken away.

Poor Bone. She blamed herself for making Glen angry, and she hated that her mama couldn't protect her. At times she would get so mad that she wanted to fight him, and other times she just wanted to disappear. Those passages were some of the most heartbreaking in the book.

"I was no Cherokee. I was no warrior. I was nobody special. I was just a girl, scared and angry. When I saw myself in Daddy Glen's eyes, I wanted to die. No, I wanted to be already dead, cold and gone. Everything felt hopeless. He looked at me and I was ashamed of myself. It was like sliding down an endless hole, seeing myself at the bottom, dirty, ragged, poor, stupid. But at the bottom, at the darkest point, my anger would come and I would know that he had no idea who I was, that he never saw me as the girl who worked hard for Aunt Raylene, who got good grades no matter how often I changed schools, who ran errands for Mama and took good care of Reese. I was not dirty, not stupid, and if I was poor, whose fault was that?"

I had previously read Dorothy Allison's memoir Two or Three Things I Know For Sure, so I knew that this novel was semi-autobiographical. From the author's afterword:

"Writing Bastard, I had imagined that girl — or rather some girl of thirteen or so who hated herself and her life. I had imagined that, reading Bone's story, a girl like her would see what I intended — that being made the object of someone else's contempt and rage did not make you contemptible. I was arguing against the voice that had told me I was a monster — at five, nine, and fifteen. I was arguing for the innocence and worth of that child — I who had never believed in my own innocence."

"The mythology of rape and child abuse had done me so much damage. People from families like mine — southern working poor with high rates of illegitimacy and all too many relatives who have spent time in jail — we are the people who are seen as the class who does not care for their children, for whom rape and abuse and violence are the norm. That such assumptions are false, that the rich are just as likely to abuse their children as the poor, and that southerners do not have a monopoly on either violence or illegitimacy are realities that are difficult to get people to recognize. The myths are so strong they subvert sociological data and personal accounts."

Truthfully, the afterword was my favorite part of the book. Besides sharing her motivations for writing the novel, Allison also discussed how some schools around the country have censored and banned the book, and how she grieved whenever she heard such news. If you want to read Bastard Out of Carolina, try and find a copy that has the afterword (mine was the 20th anniversary edition).

That said, I don't know if I can recommend this novel because it was so grim. I am glad that some readers have found comfort in seeing issues of abuse brought to light, but it will be awhile before I can shake those awful images.

"I do not want to be the person who acts always out of fear or denial or old shame and older assumptions. I want to be my best self — the one who set out to tell a story that might make a difference in the lives of people who read it. Unafraid, stubborn, resilient, and capable of enormous compassion — someone like Bone."
Posted by DianeLibrarian at 6:00 AM No comments:

Freaky Deaky by Elmore Leonard
My rating: 3 of 5 stars

Former bomb squad detective Chris Mankowski has trouble fall into his lap in the form of Greta Wyatt, aka Ginger Jones, an actress who has been raped by local millionaire Woody Ricks. But what does that have to do with Skip and Robin, the former hippies blackmailing Ricks, or his driver Donnell?

There are two things (that we'll concern ourselves with in this review) that I'm unable to resist: an Elmore Leonard book I haven't read yet and a bargain. Since this was both of those things, being 1.99 on the Kindle when I nabbed it, it was impossible for me to resist.

Freaky Deaky is a tale of two former hippies seeking revenge, a former bomb squad detective riding to the rescue of a rape victim, and of a former black panther wanting to get his cut of an alcoholic millionaire's money. Pretty much par for the course for an Elmore Leonard novel.

The more of old Dutch's novels I read, the more convinced I am that the man was slicker than a stick of butter going down a bobsled track. The dialogue is the star attraction, as always with Leonard books, and one of the criminals is at least as interesting as the protagonist, another Leonard standard. While I really liked Chris Mankowski, I thought Donnell Lewis was even more interesting.

Even though Freaky Deaky was one of those Elmore Leonard novels that passes as quickly as a summer day, it was not without some flaws. Chris and Donnell got a long a little too well near the end, probably owing to Leonard's flying by the seat of his pants style of writing. Also, I thought Chris and Greta fell into bed a little too fast. I'm by no means an expert on rape and rape psychology but I wouldn't have thought a rape victim would be up for consensual sex two days after the event. Also, I thought it was pretty high on the douche spectrum that Chris would go for Greta so soon. Other than that, Freaky Deaky was pretty good, the usual serpentine Leonard book of cool dialogue and double crosses.

Wait, I have to point out one last thing that bugged me. In the ebook version that I read, the last 20% was extraneous material like excerpts from other Leonard books. I thought I had a fifth of the book left and suddenly it was over.

While I think Elmore Leonard is one of the slicker crime writers to ever live, this is definitely a second or third tier Leonard book. Three out of five stars.