The Trouble With Tony 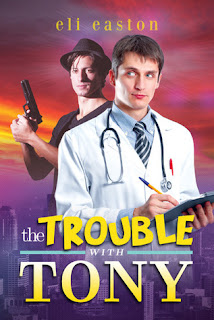 
As part of the investigation into the murder of a young woman, Seattle P.I. Tony DeMarco poses as a patient of Dr. Jack Halloran, the therapist who treated the victim at a Seattle sex clinic. This isn’t the first time Tony has gone undercover, but it’s the first time he’s wanted to go under cover with one of his suspects. He can’t help it—Jack Halloran is just the kind of steely-eyed hero Tony goes for. But he’ll have to prove Halloran’s innocence and keep the doctor from finding out about his ruse before he can play Romeo.

Dr. Halloran has his own issues, including a damaged right arm sustained in the line of duty as a combat surgeon in Iraq and the PTSD that followed. He’s confused to find himself attracted to a new patient, the big, funny Italian with the puppy-dog eyes, and Tony’s humor slips right past Jack’s defenses, making him feel things he thought long buried. But can the doctor and the P.I. find a path to romance despite the secrets between them?

I generally like dark, gritty stories that are troubling, unsettling and reveal human nature in all its beauty and wickedness. Every once in a while, though, I need a break and enjoy a light, humorous and warm-hearted story that makes me smile and love humanity for at least a few minutes. After glancing at the cover and title, I just knew that The Trouble With Tony would be a lot of fun.

Tony DeMarco is an ex-cop turned P.I. hired by the parents of a young woman who died of a drug overdose. Further investigation reveals that Marilyn White received treatment at Seattle’s Expanded Horizons, a sex therapy clinic that not only treats sexual dysfunction, but also specializes in surrogacy.

Dr. Jack Halloran, an ex-combat surgeon who was seriously wounded and suffers PTSD, is one of the suspects. The doctor respects his patients’ rights to confidentiality, so it is tough to get any kind of information from him. Tony decides the only way to solve this case is to become Jack’s patient. Since Jack doesn't believe Tony’s story about being a sex addict, Tony decides to tell him the truth – that he is unable to find Mr. Right and has only ever enjoyed sex with four guys, the last relationship being two years ago.

First, the doctor has to rule out physical causes and conducts an examination.


Now, Tony’s “picky dick” is at attention whenever Jack is around, leading him to think that Jack will be number five.

The mystery was lightweight and predictable, but it is the relationship that develops between Jack and Tony that is the focus of this story. Serious issues, like Jack’s PTSD and previous injuries take a back seat to the humorous banter and hot sexy times.

This story was warm, funny, entertaining, and made me feel all sunny inside. I will definitely be reading more by this author.
Posted by Nancy at 8:06 PM No comments: