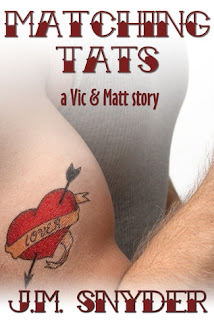 Vic Braunson's latest tattoo makes his lover, Matt diLorenzo, decide that he might want to get inked, too. He'd like a heart with his lover's initials in it. Vic likes the idea, and agrees to get the same tattoo, with Matt's initials inside. They have fun deciding where to put the tattoos -- a spot Vic hasn't already covered turns out to be pretty hard to find.

Once they decide where to get inked, Matt fears he may not be able to go through with it. He's more than a little skittish when it comes to needles, and watching the tattoo artist at work is frightening. With the powers love gives him, however, Vic finds a way to help Matt overcome his fears ...

Vic and Matt have been together a year and a half. Matt is no longer worried that Vic wants him just for his powers. They still share the ability to communicate telepathically, while Vic’s other powers change depending on their positions during sex. On Vic’s day off from work, he decides to get a facial tattoo. Even though Vic has more tattoos than bare skin, it was the first time Matt got to see one while it’s healing. Matt decides he’d like to get one, even though he’s a wimp when it comes to needles and pain, and both guys agree they’d like to get matching hearts with their initials inside.

When they get to the tattoo parlor and Vic has his done, poor Matt is so frightened he is nearly unable to go through with it. Vic’s soothing thoughts, good loving, and a new power he recently acquired help Matt get through his ordeal.

This story was hot, short, sweet, and a lot of fun!
Posted by Nancy at 8:58 PM No comments: