THE HYPNOTIST BY LARS KEPLER

The Hypnotist by Lars Kepler
My rating: 4 of 5 stars

”They’d thought he was dead when they found him among the other bodies in the terraced house. He’d lost a great deal of blood, gone into a state of shock, and hadn’t regained consciousness until seven hours later.

He was the only surviving witness.

Detective Joona Linna was certain that the boy would be able to provide valuable information, possibly even identify the killer

But if the other circumstances had not been so exceptional, it would never even have occurred to anyone to turn to a hypnotist.”

When Detective Joona Linna calls him and wants him to hypnotize the one remaining witness in the bloody carnage that happened at the Ek home, his first response is to say no, not just no, but an emphatic no. Josef is suffering from more cuts than can be counted and is floating in a coma. Linna needs to know two things: where is the older sister Evelyn, and who was the perpetrator? Bark made a promise that he would never hypnotise anyone ever again after one of his patients went berserk, blamed him for everything, and turned public opinion against him.

Hypnotists are seen in the same light as charlatans, clowns, illusionists,and parlor tricksters, so when something goes wrong, people are just confirmed in their natural suspicions of them in the first place.

The circumstances are dire, and as Joona Linna always says, he is a stubborn man. He convinces Erik to use his gifts to find out the truth.

But the truth is so insidious that even these hardened professionals are shaken.

”Josef had a particular smell about him, a smell of burning rage, of burning chemicals.”

What the hell is going on?

To add to the already freakish circumstances Benjamin, Erik and Simone’s son, is taken from their home. Simone enlists the aid of her retired police officer father, Kennet Strang, to help try and find him. Is this connected to the Josef Ek case or does this have something to do with a crazy patient from Erik’s past? ”The past isn’t dead, it isn’t even past.”---William Faulkner

I’m not going to tell you anymore because this is such a plot based book, but I will say, when I was down to the last 100 pages, I didn’t stop until I turned the last page moments before the grandfather clock chimed twelve times.

I think the biggest issue that readers have with this book is that it was so overhyped before it was released. There were all the comparisons to Stieg Larsson and how Lars Kepler was going to be the next biggest thing since the invention of Swedish meatballs. For certain readers, this backfires big time. By the time they read the book, they almost resent having to read it, and their reactions to the book are colored by those resentments. The worst thing you can do is tell someone, emphatically, that they must read a book. The blitz of ads was doing just that. It is the equivalent of assigning a book to be read in school.

The second thing is all the subterfuge over who Lars Kepler is. People were first pointing the finger at Henning Mankell, which in itself is quite the flattering comparison, but Mankell denied that it was he. Lars is in fact these people. 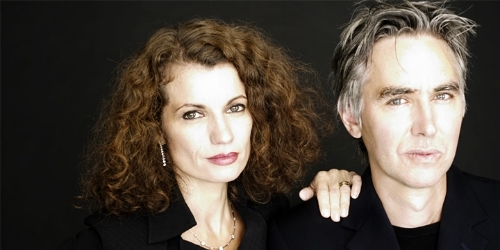 Lars Kepler is the pseudonym of Swedish husband and wife team Alexandra Coelho Ahndoril and Alexander Ahndoril. The two Alex’s. Some readers start to get Milli Vanilli vibes. Ah yes, we remember those two front men who were faker than Facebook News. The Alex’s were both writers before they decided to team up to write mysteries, so I think we can safely set that speculation aside.

You might be curious about the origins of the pseudonym. Wikipedia kindly gave me that information. ”Lars is a homage to the Swedish crime fiction author Stieg Larsson as he inspired the duo to start writing crime fiction. The name Kepler comes from the German scientist Johannes Kepler (1571-1630), who solved one of his time’s greatest mysteries: it was his calculations of the planets’ orbits that paved the way for Newton’s theses about gravity.”

Oh no, not Stieg Larsson again! Being compared to Larsson is almost as big a curse as having your book compared to Harry Potter or the The Hunger Games.

*Sigh!* Don’t be manipulated by your own manipulating mind.

The staccato short chapters drove me bonkers until I adjusted, though other reviewers have said how much they like that writing style. It probably does pick up the pace of the reading, but I’m more of a Victorian reader who doesn’t mind nestling down into a chapter for twenty or forty pages or so. I do adore Nordic Noir, and this plot ticks all the boxes for hardboiled and grit. Detective Joona Linna kind of takes a backseat in this one, but I’m looking forward to seeing him move up to the front seat for the next book. He is annoyingly good at his job, which to me is also a nice nod to Kurt Wallander.

Posted by JEFFREYKEETEN at 10:54 AM No comments: