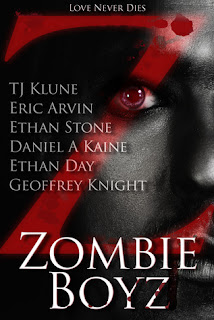 Board up the windows, push an old dresser against the door and load your shotgun. A zombie apocalypse is about to hit Wilde City, and if you want the best survival tips, six of Wilde City’s boys are here to help.

You’ll never want to exercise again as Eric Arvin and TJ Klune turn a gym full of hunks into a smorgasbord of terror in GHOUL’S GYM.

Gather your friends and fight for the man you love, as Ethan Stone and Daniel A Kaine turn Vegas into a zombie nightmare in SURVIVING SIN CITY.

And bring a date to dinner to celebrate Grumpy Grampy’s 90th birthday and introduce your family to your new zombie boyfriend in Geoffrey Knight and Ethan Day’s GUESS WHO’S COMING AT DINNER.

You’ll scream with terror and howl with laughter as Wilde City’s boys bring you our first undead anthology ZOMBIE BOYZ.

I was a huge fan of The Walking Dead. I’m not sure what happened in the last few seasons. While I am happy that Rick’s gang is no longer a passive victim of Negan’s menacing Saviors, I’ve become unhappy with the show’s direction. The episodes feel long and drawn out, with no surprises or forward momentum. There are far too many secondary characters that I’ve lost track of them, plot threads left dangling, and weak dialogues. Yet, I will continue to watch until the end. Despite their predictability, I enjoy zombie stories for their exploration of human behavior when society falls apart, the challenges of survival when vital supplies diminish and zombies multiply, and the violence and mindless action that allows one to escape from the world’s problems for a little while.

Told from the perspective of geeky teenager, Chandler Cox, we get to meet his hunky jock boyfriend, Zane Addison, celebrate his grandma’s 90th birthday, and learn why eating hamburgers is bad for you. I love how this starts with a birthday party and ends with a birthday party. This is a lighthearted and very humorous zombie romance that focuses less on gore and more on family relationships, falling in love, coming out, and...coming. Chandler’s family was priceless.

Though this was more of a classic zombie tale, strong characterization and blistering action scenes made it shine. Told in alternating perspectives by Kaleb and Cooper, we get to see how both their worlds gradually fall apart. They were so peevish and Cooper so fiercely independent that it took some time for them to grow on me. There was hot sex too. Fear not, dear readers, no zombies were involved.

Uly and Jake are going through a little rough patch. Despite that, there is no question that after a year they are still deeply in love and have an agreement not to go to bed angry. While this is by far the most romantic story in this collection, there is plenty of gore, erotica and despair to go around. After meeting the Alphabet Twinks, you will never look at zombies the same way again. This exquisitely written story was a balm for my horror-loving and romantic soul and definitely a unique take on zombies!
Posted by Nancy at 3:51 PM No comments: