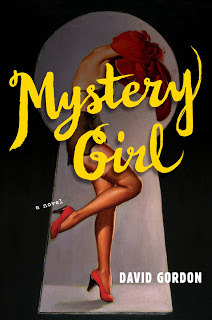 4 out of 5 stars
Reviewed by Kemper

(I received a free ARC from NetGalley in exchange for this review.)

The main character in this story is a writer who spends all his time coming up with the kind of books that no one wants to read.  Fortunately, David Gordon is very different from his creation in that he’s a writer that I very much enjoyed reading.

Sam Korberg has spent his adult life trying to do the kind of important novels that have no plot, and he’s had little success at it.  His wife Lola has had enough and leaves with the ultimatum that unless he gets a real job and shows some more ambition, then they’re finished.  Sam searches frantically for work, but there aren't a lot of opportunities for failed novelists with no other skills until he gets an offer to be an assistant to a private investigator, eccentric Solar Lansky.

Lansky is an obese shut-in who lives with his mother, but he’s also a brilliant detective who needs help since he won‘t leave the house.  He wants Kornberg to follow a woman named Mona and report on her activities.  Kornberg bumbles through the assignment which seems unremarkable at first but soon turns into a twisted mess involving the missing films of a dead director with a cult following.

The story is pretty clear about it’s inspirations with a plot obviously based on Nero Wolfe and then taking several Vertigo style twists after the movie is mentioned.  The whole thing is a little hard to pin down, but in a good way. It starts as out seeming as if it will be a comedy with Sam being a foolish twit who has wasted his time and alienated his wife by dedicating his life to writing incomprehensible fiction, but the ground shifts constantly under your feet here. There's a lot of the elements you'd expect from a goofy crime caper with Sam being a sad sack loser who meets a wide variety of odd characters, but eventually the story has Sam expressing genuinely touching  thoughts of fear about his imploding marriage and regret at the way he has let down the woman he loves.

While there’s always a sense of humor, the story becomes darker, and the violence escalates beyond the cartoon level you’d expect after the first few chapters.  What really sets it apart is the theme about creating art, and if it’s even possible today.  Sam explains his love of reading dense books and how it inspired his writing in an especially poignant section, and there’s a theory brought up several times that the real periods of human creativity have passed leaving only commercial hacks to prosper.

This book surprised me in all the right ways and what I thought would just be a mystery story played for laughs actually had a lot to say that any hard core reader will be interested in.

Posted by Kemper at 8:03 PM No comments:

The First Harry Hole Novel Finally Appears in the U.S. 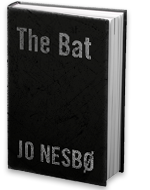 
This is the book that introduced Inspector Harry Hole of the Oslo Crime Squad--or it least it would have been had not several of the later Harry Hole novels reached the U.S. ahead of it. The wait is finally over, though, and The Bat is now at last available in a U.S. edition.

It seems a bit odd that the first book in a series featuring a Norwegian police inspector would be set in Australia. Nonetheless, that's the case. A young Norwegian woman who had been something of a minor television celebrity back home, has been raped and murdered in Sydney. Harry is sent to Australia to act as a liasion with the Sydney police in the investigation. His instructions are clear: he is to be an observer and he is not to actually meddle in the investigation. The Sydney police clearly expect that Harry will spend most of his time seeing the sights and will be content to go home and report after a few days at most.

Even if you've never read another Harry Hole novel, if you've read any crime fiction at all, you know that's never going to happen. From practically the moment he arrives in Australia, Harry develops his own ideas about the case and is anything but shy about pursuing them.

The principal merit of this book is that the reader gets to meet a younger Harry Hole and to learn a bit more about his background. The case itself is intriguing and Harry meets a number of interesting characters along the way. If there is a problem with the book it rests with the fact that Nesbo spends quite a bit of time as a tour guide and cultural anthropologist, exploring the land, its mysteries and its peoples, and sometimes the travelogue gets in the way of the story itself.

Actually, The Bat seems more like one of those books that you would find much later in a series, at a time when the author has begun to run out of ideas and so sends his character off to an exotic land to mix things up a bit--and, not incidentally, to give the author a great vacation that he can deduct as a business expense.

Still, though it's not up to the standards of some of Nesbo's later Harry Hole novels, this is a fun story with a lot of unexpected twists and turns. And for those of us who are compulsive completists when it comes to our crime fiction, it gives us the chance to finally start reading this series in order. The problem remaining is that the second book in the series, The Cockroaches will not be released in the U.S. until December. At that point, all of the Harry Hole novels will finally be available here and all will be right with the world.
Posted by James L. Thane at 9:11 AM 1 comment: