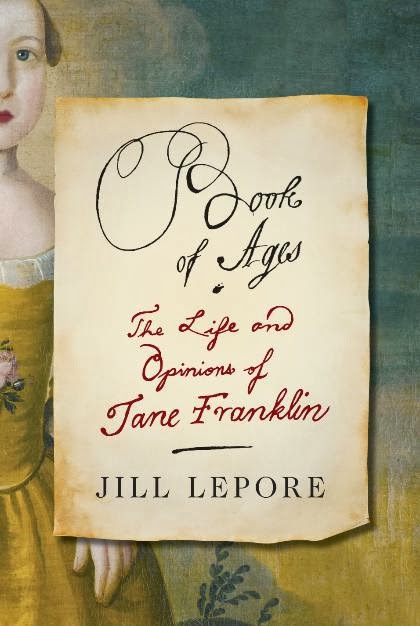 Book of Ages: The Life and Opinions of Jane Franklin by Jill Lepore
2013
Reviewed by Diane K. M.
My rating: 3 out of 5 stars

This is an interesting biography of Jane Franklin Mecom, who was Benjamin Franklin's sister. Everyone knows Mr. Benjamin as one of the Founding Fathers of the United States, but his sister Jane was almost lost to history.

Benny and Jenny, as they were nicknamed as children, were kindred spirits and exchanged many frank and personal letters during their lifetime. "The two eyes of man do not more resemble, nor are capable of being upon better terms with each other, than my sister and myself," Benjamin once wrote.

Jane was born in 1712, when Benjamin was 6 years old. It was Benjamin who taught Jane how to write, which was a rare skill for women. From the viewpoint of the 21st century, it is still disturbing to learn how little of an education girls were given back then. No public school in Boston enrolled girls. "Everyone needed to learn to read, but there was no need for a girl to learn to write ... At home and at school, when boys were taught to write, girls learned to stitch. Boys held quills; girls held needles."

In addition to writing, Benjamin also urged his sister to read, and often sent her books from his travels. She had little free time while doing chores and raising her children, but she was eager to read whenever she could. She confided to her brother: "I read as much as I dare."

Sadly, most of Jane's letters appear to have been lost to time. We know they existed because Benjamin references them in his own letters, more of which have survived. Lepore pieces together Jane Franklin's life from other documents, including newspapers, Benjamin's letters, and also a small book that Jane herself wrote, which she titled Book of Ages. It was a chronicle of births and deaths in her family, including her 12 children.

Lepore quietly and repeatedly points out that Jane was smart and shrewd, and perhaps if she had been given more of an education or if women's roles weren't so restricted, she might have played an important role in society and politics, similar to her brother. It's always fun to play the "What If" game with history, and in this case, I think it might be true.

In the Appendix about her research methods, Lepore admits how frustrating it was to try to learn more about Jane when so little of her writing has survived. "For a long time, I was so discouraged that I abandoned the project altogether. I thought about writing a novel instead. But I decided, in the end, to write a biography, a book meant not only as a life of Jane Franklin Mecom but, more, as a meditation on silence in the archives. I wanted to write a history from the Reformation through the American Revolution by telling the story of a single life, using this most ordinary of lives to offer a history of history and to explain how history is written: from what remains of the lives of the great, the bad, and, not as often, the good."

The book is a bit slow at the beginning, but I did enjoy reading about life in colonial America and the challenges Jane faced, especially during the War of Independence. Jane and her family fled for their lives on several occasions, which made it even more difficult to track down relatives later. It was also fun to see the different spellings of early English. Lepore noted that the idea of "correct" spelling didn't come until there were rules for printers. "People used to spell however they pleased, even spelling their own names differently from one day to the next ... But only the learned, only the lettered, knew how to spell."

The book also has good details about Ben Franklin's career, but not so much that it overwhelms the narrative about Jane. I would recommend it to fans of history, especially to those who want to know more about the lives of women in early America. As Ben Franklin once wrote in Poor Richard's Almanack, "One half of the world does not know how the other half lives."
Posted by DianeLibrarian at 6:00 AM No comments:

Bullets and Fire by Joe R. Lansdale
My rating: 4 of 5 stars

In order to join a gang, Tray punches a little girl in the nose and takes her wallet. But why does he really want to join the gang badly enough to hurt a child? Vengeance!

When I saw this short story was free on the Kindle, I jumped at the chance to read it. After all, Uncle Joe has a pretty good stash of my money in his cookie jar at home.

Bullets and Fire is a bloody, violent revenge tale, penned by the master of mojo, Joe R. Lansdale. Tray joins the gang, gains their confidence, and then begins his bloody work. That's pretty much all there is to it. Violent, gore, and a satisfying conclusion.

Bullets and Fire is a fun read for Lansdale veterans and newcomers alike. Four blood-drenched stars!

Rendezvous with Rama by Arthur C. Clarke
My rating: 3 of 5 stars

An enormous alien structure enters our solar system and a team is dispatched to explore it before it drifts away and is lost forever. What will humanity discover after its Rendezvous with Rama?

Years ago, I decided I needed to read more hard science fiction. Then I read Ringworld and was so uninterested that I quit my hard sf quest before it began. Months ago, a copy of Rendezvous with Rama fell into my clutches. I decided to give it a try, despite my fears that it would be another Ringworld, a book where the concept far outweighs the story. Well, the concepts behind Rendezvous with Rama do outweigh the story but I found it far superior to Ringworld, a much more enjoyable reading experience.

As near as I can tell, Rendezvous with Rama is the first Big Dumb Object (or Megastructure, if you prefer) science fiction novel. For that reason alone, I'd say it's worth a read. Hell, that's why I read it.

The characters are weak but I think that's actually an asset for a story like this. My problem with Ringworld was that I didn't find any of the characters likeable and that overshadowed any sense of discovery I would have felt as they explored Ringworld. In Rama, the characters take a back seat to the Big Dumb Object from the first page.

Clarke's writing is workmanlike but does a surprisingly good job at conveying the wonder and majesty of Rama as the team explores it. As things heat up the closer Rama gets to the sun (see what I did there?), the book really takes off.

With today's special effects technology, I think it would be fantastic if an adaptation was filmed like a faux-documentary. Like that Mermaid one National Geographic put out, only not so cheesey.

I liked it but I didn't love it. There's not a lot of plot or character development. Or action, for that matter. Now that I've read it, I respect its place in the hard science fiction pantheon but the sense of wonder doesn't make up for its shortcomings so a three is as high as I can give it.