Today's booktalk is brought to you by Trudi, that crazy Canuck librarian who continues her fervent canning in preparation for the zombie apocalypse.

***
Miriam Black is a damaged -- you could even argue deranged -- anti-heroine who isn't a very nice person. She's pretty fucked up actually, and she's just as likely to rob you as she is to spit in your eye. She fills her days (and nights) with booze and sex with strange men. She's a champion of letting the expletives fly. Miriam has enough personal demons and closet skeletons to fill a soccer stadium. And they hunt her. They torment her. And no matter how much she runs, or how far, they are always just at her heels nipping away. While her jagged edges and self-destructive tendencies might not make her very warm and sympathetic, I still find her to be extremely dynamic and interesting. Her choices matter to me and I've become very invested in how her story is going to end.

This series has a pulpy, modern noir sensibility firmly planted within the urban fantasy realm (and I couldn't stop myself from falling in love). I can gobble the Miriam Black books down as if they were piping hot, greasy cheeseburgers with a triple chocolate shake on the side. Yum! Yeah, you really have to suspend disbelief, there might even be a few dubious plot holes, but goddamn, as a dark heroine with a grim gift Miriam kicks ass. She's a viper, a scrapper, a take-no-prisoners and no bullshit kind of gal, morally dubious, who is just beginning to figure out what the right thing to do is. 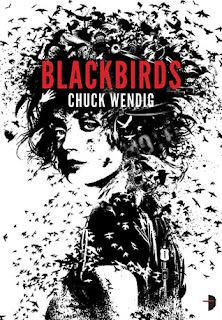 Our first introduction to Miriam is Blackbirds. Notice the cool cover art, something the awesome publishing house Angry Robot is quickly gaining a reputation for, along with their kick-ass catalogue of books. Seriously, you have to check them out.

Blackbirds is a crime novel in that there is a lot of criminal acts taking place and a lot of vivid descriptions of violence and physical trauma. Miriam's is an unusual problem -- at the touch of skin-on-skin she can foresee the time and circumstances of a person's death. Such intimate foreknowledge is a heavy burden to bear, especially since Death and Fate cannot be foiled. The only control Miriam has over these situations is to maybe be there right at the moment of your destined demise to relieve you of your money and credit cards (you don't need them anymore, right?)

She's pretty much come to accept her powerlessness. It has made her cynical, entirely dysfunctional, and dangerous. Then she meets Louis -- a hapless, widowed truck driver who only has a month left to live. His death involves torture and would be considered gruesome even by mob standards -- and this is what Miriam knows: her name is the last word that falls from his lips. The mystery becomes how do we end up at this point, and despite knowing better, will Miriam be able to cheat / beat Death this time? Will she even try?


"You want to make a change...so cosmic you're unwriting death and kicking fate square in the face, then you best be prepared to pay for it." -"With blood," Miriam says. -"With blood and bile and voided bowels."

The other woman in this story -- Harriet -- is one of the creepiest, most memorable characters I've read in a while. Like the best noir classics, it becomes all about the damaged women and the choices they make. It is they who drive the story, and men like Louis are just along for the ride.

Blackbirds ends on a solid note, so that you can take as much enjoyment out of the first book as you can without needing to read on the series. But my best bet is, once you meet Miriam you're gonna want to stick around for awhile. 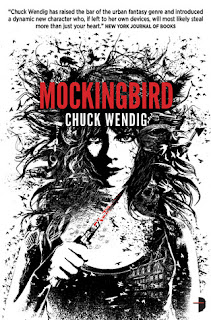 
In this second installment, Miriam's visions get her tangled up in something much more sinister and unholy than she could ever imagine. Shacked up in a trailer park, Miriam feels trapped and suffocated. Her feet are getting itchy and she wants to hit the road again, to resume her shiftless (and violent) life.

Miriam visits a private school for wayward girls to determine whether the hypochondriac English teacher is really dying from cancer. While on this errand Miriam learns that one of the students is going to die a horrible torturous death six years from now at the hands of a masked man with a sparrow tattoo. Miriam's inadvertent discovery puts her onto the trail of a serial killer, placing her own life in serious peril. With her usual potty mouth, rude inappropriate humor, and feisty fighting skills, Miriam makes several return visits to the private school, and with each visit uncovers more girls who will meet bloody, untimely deaths unless she can figure out a way to stop it.

I really warmed up to Miriam in this sequel. We get to see more of her vulnerable side, and to learn more about her past, her relationship to her mother, and the tragic events that bestowed her precognitive curse on her in the first place.

What's next for Miriam? I for one cannot wait to find out. Book 3, Cormorant is set to become available later this year.

Chuck Wendig has a new book out right now called The Blue Blazes.  Check out Brandon's review!
Posted by Trudi at 8:47 PM 2 comments:

How did you discover Goodreads?
My friend Jordan recommended it to me. She has a lot to answer for.

What have been your most memorable Goodreads experiences?
The Celebrity Death Match Tournament.

Name one reviewer not in the Forbes 25 that people should be aware of.
David

What was your initial reaction to Amazon buying Goodreads?
Unhappy, but it was inevitable.

How many books do you own?
As many as our apartment will hold - lost count.

Who is your favorite author?
Tie between Gustave Flaubert, Anthony Powell and E. Nesbit

What is your favorite book of all time?
Tie between Madame Bovary, A Dance to the Music of Time and The Enchanted Castle

What are your thoughts on ebooks?
A necessary evil.

What are your thoughts on self-publishing?
People should buy more copies of What Pooh Might Have Said to Dante! It's better than the books I've published through so-called "real" publishers.

Any literary aspirations?
Another review collection coming out soon, a serious book hopefully sometime next year.

Stop the presses!
Manny's new book, If Research Were Romance and Other Implausible Conjectures, is now available at finer bookshops everywhere and Amazon.com.
Posted by Dan Schwent at 2:30 AM No comments: