3 out of 5 stars with giant space habitats orbiting them.

Like a lot of people, I was eagerly anticipating Neill Blomkamp’s follow up to District 9, but while there’s a lot to like about Elysium, it doesn’t live up to the D9 standard.  It almost seems like  Blomkamp came up with the idea after drinking heavily and flipping channels between a cable news debate about illegal immigration and one of the Jason Bourne movies.  I picture him waking up in the middle of the night shouting, “The space station is America and Earth is Mexico and I’ll give robot arms to Matt Damon to make him even more deadly!”


In the year 2154 the Earth is so polluted and overpopulated that the wealthy have relocated to a huge space habitat called Elysium.  On Elysium everything is clean and beautiful, and best of all, automated medical pods can cure any disease or heal any injury.  The citizens have robots to serve and guard them from any Earth riff-raff trying to use shuttles to sneak in illegally.  Elysium’s chief guard dog is the ruthless Delacourt (Jodie Foster) who doesn’t hesitate to use lethal force to keep out any undesirables, but she is chafing under the restrictions of the president and the ruling council who think that blowing up shuttles full of desperate people seems a bit harsh.

On Earth, Max (Matt Damon) is an ex-convict who has dreamed of going to Elysium since he was a young orphan, and he’s delighted to bump into his old childhood sweetheart Frey (Alice Braga).  Max is trying to keep his nose clean, but the automated parole system and demanding boss at the factory he works in make it nearly impossible.  After Max is the victim of an industrial accident that leaves him dosed with a lethal amount of radiation, his only chance is to get to Elysium within a few days and use one of the med pods. 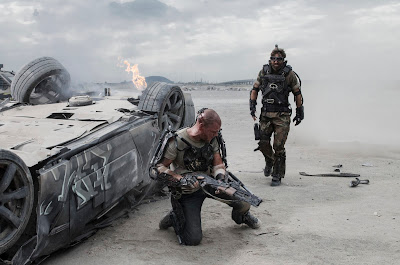 Max turns to Spider (Wagner Moura) who tries to smuggle people onto Elysium with little success.  Spider offers Max a ride if he’ll help kidnap a wealthy Elysium citizen on Earth so that they can hack the financial and security data they all have loaded in their brains.  Since Max is sick from the radiation poisoning, Spider has him augmented with some spare cybernetic parts, and Max targets John Carlyle (William Fichtner), the heartless owner of the factory where he worked.  Unknown to them, Delacourt has been conspiring with Carlyle to initiate a reboot of Elysium’s system that will put her in charge, and Carlyle now has that program loaded into his brain.  To try and keep the codes out of anyone else’s hands, Delacourt dispatches a dangerous and crazy operative named Kruger (Sharlto Copley).

Part of the problem is that there’s no subtly here.  Elysium is filled with spoiled assholes and Earth is made up of the common good-hearted folks just trying to get a break.  Damon does an adequate job of making Max relatable, especially in early scenes where his frustration at the rigid laws and bureaucracy is boiling just under the surface.  However, things are especially weak on the villain’s side. Foster’s Delacourt is heartless and ruthless. Carlyle is a greedy spineless weasel.  Kruger is a sadistic killer and that’s about it even though Copley does some entertaining scenery chewing at times.  None of their motives are explained, and there’s no perspective given on how Elysium can live so well when the Earth has supposedly been used up like a paper towel.

In fact, the plot doesn’t make a lot of sense in that almost everyone wants to get to Elysium simply for the medical treatments there.  Yet the pods seem to work so magically that withholding them from Earth is stupid because it’d make a lot more sense for Elysium to use them to keep people in line by offering or withholding medical treatment.  To universally deny it sets Elysium up as the targeted destination of the desperate and creates most of their problems. 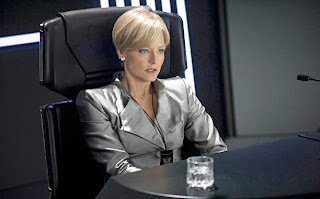 This would have been a lot more interesting if the story was about resources in general and not just mainly about the magical cures that Elysium refuses to share for no reason that‘s explained.  If they were denying the medical treatment because the machines require too much power or rare materials to work, it’d make more sense.  Or perhaps the world’s overpopulation requires a brutal thinning of the herd.  If Delacourt saw herself as acting in the interest of humanity by trying to save precious resources for a few that would carry on, that would have made her a much more effective villain than someone who just doesn’t want any of those filthy Earth people on her space station.

The movie looks great visually and the contrast of Elysium which looks like the spiffiest gated community ever built against a Los Angeles which is now nothing but filth and squalor makes the point that this is definitely the Haves vs. the Have-Nots.

Blomkamp also delivers cool sci-fi action and weaponry just as he did in District 9, but he fell into the common trap of using choppy editing for many of the fight scenes so that at times it’s nearly impossible to tell what’s going on.  That’s made even more frustrating because at some points there are some cool shots like a robot being torn apart by explosive bullets in slow motion that is simply stunning so it’s even weirder that Blomkamp chose to make other scenes practically incomprehensible.


At the end of the day, Elyisum is weird mix in that it’s a big action sci-fi movie that has a few too many ideas to be a pure shoot ‘em up, yet the plot lacks the kind of detail and character motivation needed to lift it up to the level required for a more thoughtful kind of sci-fi story.  I cared more about the alien creatures of District 9 than I do the humans stuck on Earth in Elysium even though both stories are about the plight of immigrants in one form or another.
Posted by Kemper at 12:26 PM No comments: 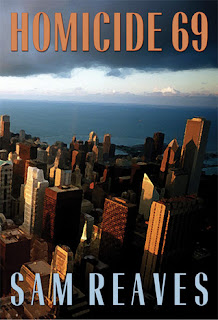 
Homicide 69 is another excellent book from Sam Reaves, an author who doesn't have nearly the following nor the reputation that he deserves.

The book is set in the summer of 1969. Richard Nixon is in the White House; war is raging in Vietnam; Neal Armstrong is walking on the moon; the Manson family is on its murderous rampage, and American society is in the process of being torn apart.

Against that backdrop, Mike Dooley, a solid, decent homicide detective, is doing what he can to redress the injustices committed by his fellow Chicago residents against each other. He's also trying, with marginal success, to navigate the treacherous waters of his own personal life. And a veteran of World War II, Dooley worries day and night about the safety of his son Kevin, a Marine who has been deployed to Vietnam.

Late one night, Dooley and his partner are called to the scene of an especially horrific homicide. A young woman, Sally Kotowski, has been brutally tortured and murdered. Kotowski was a former Playboy Bunny who hung out with mobsters, and Dooley quickly concludes that her death was mob-related.

A solution to the murder appears almost magically, and Dooley's bosses are happy to sign off on the case and declare it closed. Dooley is not. He believes that the solution is too neat and tidy and that the real killers are still at large. Through a long and difficult summer, he pursues the case relentlessly, often on his own time and at the risk of destroying his own career. And his journey takes him deep into the dark side of Chicago life in the late 1960s.

Homicide 69 is much more than a conventional crime novel. The reader knows fairly early on who the guilty parties are and so this is not a "mystery" novel in the traditional sense. It is, at heart, the story of one lone man, struggling against seemingly impossible odds, to do the right thing and to achieve one very small measure of justice in a world gone mad.

It's a story brilliantly told. Reaves has captured perfectly the tenor of the time in which the story is set and he has created an absolutely riveting protagonist in Mike Dooley. Even at nearly 600 pages, the story is way too short, and one closes the book wishing that you could follow Dooley's career indefinitely.

After being hard to find for some time, Homicide 69 is now available in a new e-book edition. It's hard to imagine any fan of crime fiction who would not enjoy it.
Posted by James L. Thane at 9:05 AM No comments: