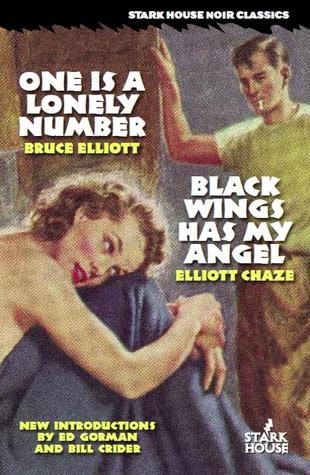 
Black Wings Has My Angel was originally published in 1953 as a Gold Medal mass-market paperback, one of the hundreds of pulpish novels aimed at male readers that filled paperback book racks in drugstores and other such places all over the country in the Fifties. For whatever reason, though, and unlike so many of the other of these books that can still be found in used bookstores, this one has become extremely scarce, which is a tragedy because it's a classic of the hard-boiled school. Kudos, then, to the folks at Stark House who have reprinted the book in a new edition, along with One Is a Lonely Number, by Bruce Elliott.

The story is narrated by a man who’s initially calling himself Tim Sunblade. We quickly learn that Tim has recently broken out of prison and that he has a plan to pull off a crime that will leave him on easy street for the rest of his life. In a fleabag motel, he sends out for a ten-dollar hooker. The woman who arrives with the bellboy calls herself Virginia and appears to be much too beautiful and skilled at her trade to be working this low-rent circuit.

Sunblade is entranced by the woman and so takes her along when he hits the road. He tells himself that he will dump her before too long, but he never gets around to doing so. She’s gotten under his skin and in a novel like this, we know that's going to mean a whole lot of trouble not too far down the road. "I wanted Virginia," he says. "She was a creature of moonlight, crazy as moonlight, all upthrusting radiance and hard silver dimples and hollows, built for one thing and only one thing and perfectly for that."

Virginia has secrets of her own and in a relationship like this, neither party can afford to trust the other very far. It’s bound to be a rocky ride, and more than a little bit dangerous, but Tim ultimately concludes that Virginia is just the partner he needs for the big job he intends to pull off.

Through the early part of the book, we watch the two travel cross country and make the necessary preparations for the crime they intend to commit. In the interim, they see a lot of the country, vividly described by Chaze, and they also have a lot of fairly rough sex, which is also fairly vividly described, at least for 1953.

In many respects, of course, this is a fairly familiar story, but in the hands of Elliott Chaze, it rises to something extraordinary. The writing is visceral and cuts close to the bone. As my friend, William Johnson, has suggested, this is a book that you feel rather than simply read.

My only reservation has to do with the crime itself. Without giving anything away, there's a development that took me out of the story just enough to make me give this four stars rather than five. But still, it's an excellent read and one that any fan of classic crime fiction should race out and discover for him or herself.

The Empire Strikes Back by Christopher Golden
Reviewed by Jason Koivu
My rating: 3 of 5 stars

Yeah, that's how it started. Then I began reading and suddenly I wasn't so excited anymore. "This piece of (expletive!...probably "shit" or something) only has 13 endings and only 14 choices? 14?!" What can a CYOA book do with only 14 choices? Call me choosey, but that's not much choice. Page after page ends with a "Turn to page ##". They tried to "spice it up" by saying stuff like "Find Out on page ##" or "Hurry to page ##", but the fact remains that for most of the time there is NO choice given in this so called Choose Your Own Adventure book.

Another irritant is that most of the plot lines follow exactly along with how the movie goes. You can tag along with Leia and Han and leave Hoth for Cloud City or you can shadow Luke's Empire Strikes Back story line. All you do is just follow them around and do what they did in the movie. On the rare occasion you have a choice to make, if you veer from the movie script you're fucked.

Ah, but what's this?! One of the plot lines actually allows you to completely leave the others and join the Dark Side! Wow-e-wow! This was what I was hoping for! The chance to go full Dark Side and join Vader as his apprentice, backstabbing your Rebel friends, wooohoooo! Awesome! Hell, they even give you a chance to repent midway through if you desire redemption. Boy howdy, that really saved this book for me.

This was released in 1998, I assume in preparation for the upcoming craptastic Star Wars prequels. With its big font and few words per page, at first I thought it was meant to be a kid's book. But on second thought, I think they just wanted to get something out there in book form prior to the new movies, and this somewhat unfortunate stinker is the result.

Reportedly Funny Man Turns Out To Actually Be Funny!

Dave Barry! Dave Barry! Dave Barry! The lame IT guy at my old job kept going on and on about Dave Barry, so of course I wanted nothing to do with him (Either of them, but mostly Barry). How funny could he be, especially since he was being recommended by a mundane white dude who sat simpering and gurgling behind his computer in a closet of an office all day?

Well, the answer is, Dave Barry is quite funny. I laughed, even aloud, a good many times. Sure, he sometimes sets up his jokes viewable from a mile away, but he's been a humor columnist for a good long while and he's developed a knack for it. He knows how to mine a topic for whatever nuggets of gold it may yield.

In I'll Mature When I'm Dead those topics include celebrities, parenthood, crack, Scarlet Johansson, marriage, writing screenplays, Miami, NY versus Miami, Scarlet Johansson and crack. As you can see, he does tend to go back to the well on occasion. One too many times a joke was punctuated by crack and his babe du jour was...any guesses? You got it: Scarlet Johansson.

Now, nick-picky complaints aside, I really did enjoy this book. The guy can be funny, especially when he's shooting the shit about everyday life, and he can satirize with the best of them. He sticks the Twilight books with a sharp barb in an extended spoof. His take on tv hit "24" is not quite as successful. You can tell he likes the show too much to do it any real harm.

However, the problem with topical humor books is that they don't tend to age well. Making fun of the Kardashians is already bland/easy humor, and so like the celebrities-of-the-moment that he bashes, Barry's book will too be soon irrelevant. But that really doesn't matter, because the prolific Barry will just churn out another. Just as more vacuous celebrities will be churned out... *shudder*