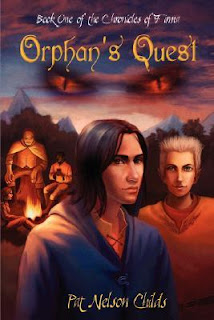 
Rokey, a poor orphan, has lived his entire life sheltered within the walls of the Noble Contemplative Monastery. Growing up, he never dreamt anything would haunt him more than the riddle of his parents' identity. But at seventeen, Rokey is discovering that while his roommate, Ely, can think only of girls, his own feelings draw him toward other boys instead. Soon the question of whether or not he is a "samer" is occupying his mind to the exclusion of all else. But when a tragedy results in his expulsion from the only home he has ever known, and an unknown enemy begins trying to kill him, Rokey's mind abruptly returns to the mystery of his parentage. Solving that puzzle, he determines, could mean the difference between life and death. On the road, Rokey soon meets up with a charming elf named Flaskamper. Captivated by the handsome young man, the elf promptly volunteers his help, as well as that of his three unlikely companions. Before long, the five become swept up in the effort to solve the riddle of Rokey's origins and to find out who is trying to kill him, and why. Along the way, Rokey endures some harsh lessons about disappointment and betrayal, but also delights in the joy and excitement of first love. Foiled in initial attempts, Rokey's enigmatic foe escalates the attacks. As the young orphan and his new-found friends pursue the trail of clues that leads them across the land of Firma, they find themselves battling an ever-deadlier array of assassins. When they finally do uncover the truth, it is in the last place Rokey had ever expected to find it.


Rokey is a 17-year-old orphan who spent his childhood in the Noble Contemplative, a monastery where young men from all over are educated and trained for their future vocations. While his roommate and closest friend, Ely, thinks about girls, Rokey discovers early on his attraction to boys. An unfortunate accident has resulted in Rokey’s expulsion from the monastery and the only life he’s ever known. During a robbery, Rokey is rescued by a handsome blond elf named Flaskamper and his friends. Together, the group embarks on a journey that will forever change Rokey and his friends.

Orphan’s Quest is a riveting fantasy novel that kept me flipping pages until the wee hours of the morning. Despite the use of common fantasy tropes and some predictable situations, the author has created a well-drawn world filled with likeable and believable characters. The love that develops between Rokey and Flaskamper is touching and develops at a natural pace.

The simple language and uncomplicated plot make Orphan’s Quest a story that should appeal to young readers. The adventures, suspense and romance make it a fun read for adults too.

I thoroughly enjoyed this story and look forward to reading more by this very talented author.
Posted by Nancy at 6:00 AM No comments: