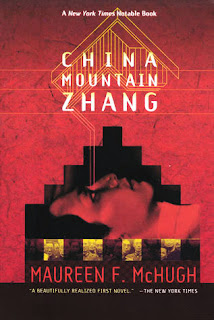 Winner of the James Tiptree, Jr. Memorial Award, the Lambda Literary Award, the Locus Award for Best First Novel, and a Hugo and Nebula Award nominee.
With this groundbreaking novel, Maureen F. McHugh established herself as one of the decade's best science fiction writers. In its pages, we enter a postrevolution America, moving from the hyperurbanized eastern seaboard to the Arctic bleakness of Baffin Island; from the new Imperial City to an agricultural commune on Mars. The overlapping lives of cyberkite fliers, lonely colonists, illicit neural-pressball players, and organic engineers blend into a powerful, taut story of a young man's journey of discovery. This is a macroscopic world of microscopic intensity, one of the most brilliant visions of modern SF.

I'm not sure what I expected from this book but considering all its awards and nominations I was hoping it was legitimately good. I got what I hoped for. While I love space opera and action styled science fiction, I also love a good character driven story. This falls into the latter category.

I gravitate towards the more specific genres of science fiction such as dystopian, post apoc and cyber punk because they are topics that I've put some thought into. So has McHugh. A Chinese dominated dystopian society is not one I've even considered and add into the mix the fact that the main character is also gay. It made for some really good backdrop, dialogue and therefore good reading. It could even be said this is an alternate universe as it doesn't feel like a distant future.

There are many subplots that almost weave into one. All of them do touch on the main character at one point or another but not all are resolved or are they resolved very obliquely. Which didn't seem to matter to me because I was so caught up in Zhang's character.

I also loved the glimpses into some future or possible current tech. Nothing too earth shattering but the swim suits were a fascinating concept and totally plausible. I'm glad I delved into this book before I ventured into some other current dystopian novels where the emphasis seems to be more on the physical horror.
Posted by Zorena Deckard at 10:00 AM No comments:

Failed to Get Under My Skin 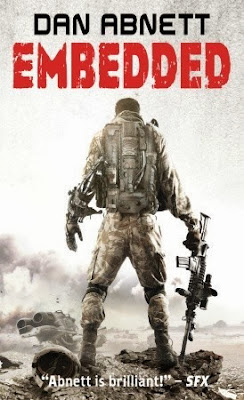 Embedded is set in a future where humans have begun to colonize other planets. Eighty-Six is the most recent settlement and it's where universe-weary, award-winning journalist Lex Falk has arrived to investigate rumors of political unrest and a military lockdown on all information leaving the planet. Falk's clout gets him embedded with the military, but it's not until he's approached by a clandestine party that can actually embed him into the body of Nestor Bloom, a combat soldier, that he gets the real story about what's happening on Eighty-Six.

Elmore Leonard famously advised "Try to leave out the part that readers tend to skip." If Dan Abnett had taken this approach, the novel could have been about 150 pages shorter and far more enjoyable. He has apparently never met a simile that he's not keen on rubbing up against.

The book is far too descriptive and I know many people might argue that such is necessary for believable world-building, a sentiment with which I might normally agree. If you're going to present me with an alien world, I want to see it. The problem here is that Eighty-Six isn't much different from Earth. There are no alien life forms, no exotic landscapes, no cultural clashes. And yet Abnett is always keen to tell us what shade of blue the sky is and what the green trees in the forest look like. Other than the existence of "blurds" (some form of insect/bird hybrid), there's really nothing unusual about the setting. And there's nothing particularly futuristic other than the ubiquitous presence of a poison called Insect-Aside and apparently inorganic foodstuffs that always end with the suffix "-effect" (such as chicken parmigiana-effect, which can be washed down with a can of tasty NoCal cola-effect). Even the tech through which Falk is embedded into Bloom is clichéd--Falk is suspended in a Jung tank, which is just a clever name for the science fiction trope of a womb-like tank in which Falk is suspended in a viscous, amniotic-like liquid. None of this is particularly bad, but none of it is particularly good--and it's been done much better before.

The book takes forever to get going, developing characters and relationships that are promptly jettisoned as soon as Falk is embedded within Bloom. The actual embedding--the part of the story with the most promise--missed out on so many opportunities to explore the psychological issues of dwelling within another's mind. If Bloom and Falk had been inhabiting the same consciousness throughout most of the narrative, there could have been some really standout scenes. However, Falk is simply a repressed observer, a passenger, within Bloom until Bloom is shot in the head. At this point, Bloom becomes an unconscious passenger in his own body and Falk has to take over, a plot that still has some possibility as Falk is not a trained soldier. However, every time Falk gets into a jam, Bloom's muscle memory arrives to save the day, allowing Falk to blast his way out of every inconvenience with which he comes into contact. When Bloom is shot and his persona disappears, the book basically becomes a stripped down version of Avatar, only without the aliens.

1. From what I can tell, the U.S. is now the United Status (no explanation is given for this) and the army with which Falk is embedded seems to be U.S. As a result, all of the British spellings for words seem incongruous and often jarring. A minor pet peeve, I understand, but there it is.

2. So we're apparently centuries into the future, colonizing planets, and the two dominant powers are the U.S. and the Bloc, who speak Russian and whose military vehicles are all adorned with red stars. That's right--we're fighting a Cold War with the Communist Bloc in outer space. I might forgive this in a piece of 1950's science fiction, but in 2013? We can't come up with a fresh new narrative for who the bad guys are?

3. It is never made clear as to how Bloom's body is still functioning after he's been shot in the head, right below the eye. The mental image I kept getting as Falk tried to will Bloom's body to do his bidding was Weekend at Bernie's in military garb.

4. The ending. What. The. Freek®. So, in the last 10 pages, Falk actually, against all plot odds, discovers something half ass interesting. But that's the thing--only half ass. We don't get the whole ass. What he finds is only hinted at and the repercussions are ambiguous. Basically, it took 400 pages to get to the real story and then it just stops. I wanted to hit something and hit something hard when I reached the end.

5. The whole use of Freek® as a linguistic patch that prohibits a person from using any expletive other than "Freek."

In the end, I can only offer this advice: read John Scalzi.
Posted by Amanda at 5:00 AM No comments: