Ann Patchett Should Be My BFF 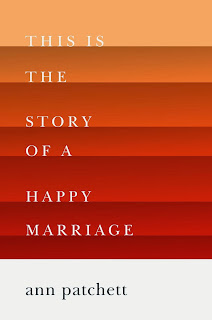 This is the Story of a Happy Marriage by Ann Patchett
2013
Reviewed by Diane K. M.
My rating: 5 out of 5 stars


This is a marvelous collection of essays from one of my favorite writers, most of which I had never read before. Before becoming a bestselling novelist, Patchett made a living by writing articles for various magazines, including Seventeen, Vogue, Gourmet, Outside and The New York Times Magazine. Over the years, she stacked up a significant pile of essays, and a friend recently nudged her into putting her favorites into a collection. Pieces date from the 1990s up until 2012, with topics on divorce, marriage, her dog, her grandmother, a Catholic education, opera, being a writer, censorship, solitude, bookstores (Patchett owns one), floods, Christmas, the Los Angeles Police Department, and driving a Winnebago around the American West. Something for everyone!

My favorite essay in the collection was "The Getaway Car," something every aspiring writer should read. Patchett lays down how she started writing, and gives some solid advice for anyone who wishes to be one. Another favorite was the titular essay, "This is the Story of a Happy Marriage," where she discusses why her first marriage ended in divorce and how she came to be happily married to her second husband. She has insights that any person should consider before getting married.

I struggled over which quote to share in this review, because truthfully, there are wise and beautiful sentences on every page. To pull one out of context is like plucking a rose from a flower bed -- yes, it looks pretty in a vase, but doesn't it look so much more lovely with its friends in the garden?

I finally chose a quote from "The Bookstore Strikes Back," about how she came to open and co-own an independent bookstore in Nashville after all the others had closed. She got a lot of press when the store opened, including making the front page of The New York Times.

"I have inadvertently become the spokesperson for independent bookstores. People still want books; I've got the numbers to prove it. I imagine they remember the bookstores of their own youth with the same tenderness that I remember mine. They are lined up outside most mornings when we open our doors because, I think, they have learned through this journey we've all been on that the lowest price is not always the best value ... Maybe we just got lucky. But my luck has made me believe that changing the course of the corporate world is possible. Amazon doesn't get to make all the decisions; the people can make them by how and where they spend their money. If what a bookstore offers matters to you, then shop at a bookstore. If you feel that the experience of reading a book is valuable, then read the book. This is how we change the world: we grab hold of it. We change ourselves."

If you are new to Patchett, this collection is a good place to start. I would also recommend her novels "Bel Canto" and "State of Wonder" -- she's written several others but those two are my favorites -- and the wonderful memoir "Truth and Beauty." Three cheers for Ann Patchett!
Posted by DianeLibrarian at 7:00 AM No comments: 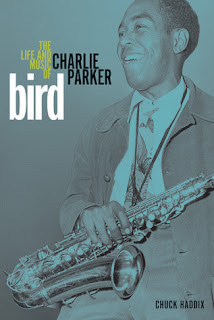 Bird: The Life and Music of Charlie Parker by Chuck Haddix
2013
Reviewed by Diane K. M.
My rating: 4 out of 5 stars


This is a marvelous biography about legedenary jazz musician Charlie "Bird" Parker, who was born and raised in Kansas City. His nickname is a shortened version of Yardbird, which is what Charlie called chickens. He liked to eat chicken, and others picked up on the name.

Chuck Haddix tells lively stories about the saxophonist, who was known for his brilliant jazz compositions but also for his drug and alcohol use. Charlie would often disappear before a gig because he was trying to score heroin. One time he went into withdrawal while traveling cross-country, and he wandered off the train in the middle of the desert to try and get drugs.

One of the saddest stories in the book happened in 1936, when Charlie was in a car accident while traveling to a gig in central Missouri. Charlie broke three ribs and fractured his spine. During his recovery, a doctor prescribed heroin to relieve Charlie's pain. But he soon became addicted and struggled with his heroin habit for the rest of his life. It makes one wonder how different his life might have been if he had never been in that crash. Yes, Charlie drank and smoke before then, but maybe he could have avoided a heroin addiction that ultimately ruined him and damaged his career.

However, that sad story is quickly followed by my favorite one in the book, which is how and where Charlie honed his craft. Back in the 1930s, a resort area in southern Missouri called the Ozarks was just starting to get booming, and club owners started bringing in musicians from Kansas City and St. Louis to satisfy the tourists from those bigger cities. At that time and in that part of the country, it wasn't considered safe for blacks to be traveling after dark, so Charlie and other musicians would often remain in the resort town for weeks at a time, until their contract was over. It was during one such stretch in the Ozarks that Charlie had time to really focus on his music and his playing. When he returned to Kansas City a few months later, everyone was blown away by how much he had improved.

"Charlie Parker, in the brief span of his life, crowded more living into it than any other human being. He was a man of tremendous physical appetites. He ate like a horse, drank like a fish, was as sexy as a rabbit. He was complete in the world, was interested in everything. He composed, painted; he loved machines, cars; he was a loving father. He liked to joke and laugh. He never slept, subsisting on little catnaps. Everyone was his friend -- delivery boys, taxicab drivers ... No one had such a love of life, and no one tried harder to kill himself."

When Parker died in in 1955, he was only 34. But his health had been so poor and his body was so abused by drugs and alcohol that the attending physician judged him to be 53.

Haddix lovingly describes Parker’s compositions and performances, inspiring me to look up and listen to several of Parker's songs. Some of my favorite details in the book were about Kansas City’s history, including where Charlie went to school and how he started playing music, or where the hopping nightclubs were in 1951. This would be a great gift for any jazz fan.
Posted by DianeLibrarian at 6:00 AM No comments:

The Given Day by Dennis Lehane
My rating: 3 of 5 stars

The Given Day is the tale of two men, Danny Coughlin and Luther Laurence, and their families, set against the backdrop of pre-prohibition Boston.

Yeah, I know that didn't really say much but it's hard to write a teaser for a 700 page historical novel.

As I understand it, this was Dennis Lehane's return to the novel world after five years of doing other things, mostly writing for The Wire. And he crammed every thought he may have had in about Boston in the early 20th Century in those five years into this book.

Danny Coughlin is a cop working hellish hours, almost 100 hours a week, with the Boston PD, following in the footsteps of his cop father. He's conflicted about his feelings for Nora, his family's housekeeper, and is something of a black sheep. When his father comes asking for help rooting out Boleshivik cells in Boston, how can he say no?

Luther Laurence, who once played an impromptu baseball game with Babe Ruth, goes from Columbus to Tulsa, and heads to Boston to escape some trouble and winds up working for Danny's father and getting under the thump of another cop, Edward McKenna, racist extraordinaire.

Danny and Luther drive the book, living through historical events like the Spanish Influenza epidemic and the Boston Molasses Explosion, while dealing with their conflicts with their respective families. For the most part, it's a pretty gripping read. The political climate of Boston circa 1920 was a spectacle to behold: downtrodden blacks, unions rising up to protest horrible pay and working conditions, communists lurking in the shadows, and the old guard struggling to hold everything together and maintain the status quo.

The supporting cast is a diverse and colorful bunch. Ed McKenna is despicable but you get the feeling he's doing what he thinks is right, which makes him that much more horrible. Danny's father and brother are also conflicted characters. I also really liked the friendship between Luther and Nora.

The entire cast goes through the meat grinder so many times they look like ham salad by the end of the book. While the ending is largely happy, it's not a happily ever after sort of thing. More like a "we're lucky to be alive" sort of thing.

Like I said, it was a really good read but I felt like LeHane was trying to take on too much at times. There was a little too much going on and also it felt like LeHane did a ton of research and was trying to get the most of out his nickel with it. Cutting 100 pages out of this beast wouldn't have hurt it. Also, apart from the initial baseball game with Luther, I thought the Babe Ruth parts were pretty unnecessary.