“The soldier above all others prays for peace, for it is the soldier who must suffer and bear the deepest wounds and scars of war.” 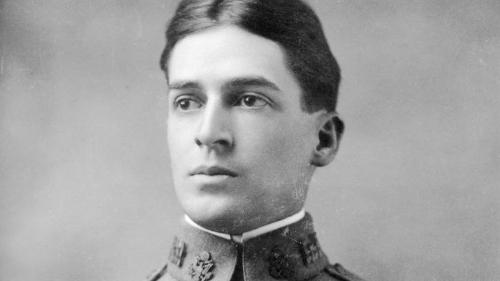 Douglas MacArthur at West Point. Following in his father’s footsteps.

The blare of trumpets, the clash of arms, the screams of the wounded, the bullets whizzing through the air, and the acrid smell of cannon smoke were all part of the life of Douglas MacArthur since the day he was born. His father’s exploits hung on him like a second skin. At the Battle of Missionary Ridge in 1862, Arthur MacArthur Jr. seized and carried the regimental standard to the top of the hill and planted it. He was 18 years old and 8 feet tall. By 19 he was a colonel. By 1899 he was a Brigadier General and at the Battle of Manila. In 1901 he was a Major General and appointed the Military Governor of the Philippines.

This is a lot to live up to. It is difficult, in some cases, to see the amount of influence a father has on his son, but in the case of the MacArthur’s, you don’t need much speculation. It would have been perfectly understandable if Douglas had decided to go into a profession that was different from his father’s, but in many ways they are cut from the same cloth. Douglas MacArthur’s own son, Arthur MacArthur IV, went his own way, a polar opposite direction from his father, even to the point of being a recluse and avoiding the spotlight his father craved so much. 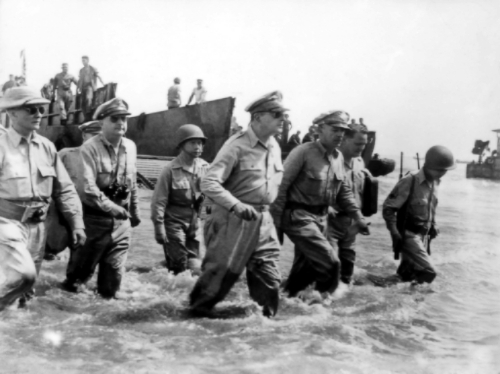 MacArthur’s famous ‘I will return’ photograph. He promised when he was forced to leave the Philippines that he would return and liberate that nation. He also knew a good photo opportunity when it saw one.

William Manchester’s book covers MacArthur from cradle to grave. Douglas was a momma’s boy, but in no way did that make him weak or unsure of himself. It did make him dependent for the rest of his life on other people to do those things for him that he didn’t want to take the time to do for himself. He was an avid reader and book collector. He added to his father’s library clear up until the time the collection was lost in Manila during the Japanese occupation during WW2. I cringed along with him at the descriptions of the books turned to charcoal. His second wife, Jean, was the perfect companion. She was with him as much as possible, even following him into war zones. She and his son were both trapped with him in the Philippines and were part of his daring escape. Jean was a wife, a mother, and a constant comfort to him. 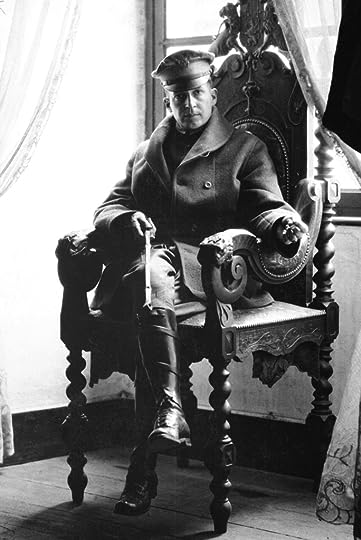 Brigadier General Douglas MacArthur looking very comfortable with himself in 1918

MacArthur really became MacArthur on the battlefields of WW1. He was horrified by the slaughter and the useless losses of life due to the hubris or incompetence of commanding officers. He was a legitimate war hero, earning seven silver stars. By the end of his career he had been awarded almost every ribbon for heroism that was available. During WW2, troops, weary of the war and tired of being in harm’s way, referred to him as Dugout Doug, which is ironic given his propensity to put himself in harm's way needlessly. When he was asked about his insistence on remaining standing where bullets are flying by like buzzing bees or where bombs were exploding close enough to hear the whine of the shrapnel, his answer gives us a good idea of why he felt it was necessary: ”If I do it, the colonels will do it. If the colonels do it, the captains will do it, and so on.”

He is considered one of the best tacticians of World War Two. Where Ulysses S. Grant and George “Old Blood and Guts” Patton ground up soldiers in their command giving new definitions to the term cannon fodder, MacArthur developed campaign strategies with the intent of sparing as many GI lives as possible. His men killed ten Japanese soldiers for every one of their own they lost. 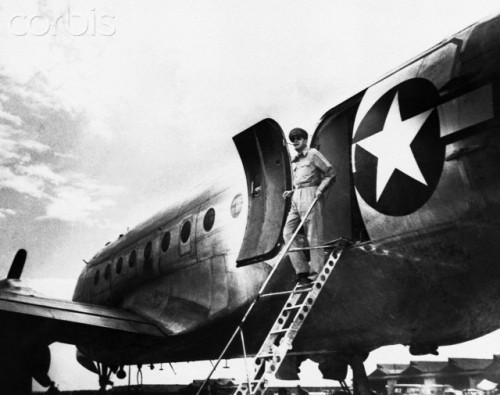 His most remarkable work, in my opinion, was when he was overseeing the occupation of Japan from 1945-1951. He gave equal rights to women for the first time in the history of that country. He abolished adultery laws that were geared only towards punishing women. It has been estimated that he saved over 2.1 million Japanese lives with inoculations alone. He was more than a soldier during this time. He was a statesman. Though I may have questioned his ability to be POTUS in the past, after reading Manchester’s observations of his job performance during this period of time, I have reevaluated his qualifications.

MacArthur was beset with paranoia for most of his career. Some of it was based on fact. Some of it was just a highly intelligent brain with too much time to think about why he was passed over for a promotion or how a man who was once an assistant on his staff (Dwight D. Eisenhower) became his boss. I think part of the issue that MacArthur had with Washington and the presidents he served is the amount of time he spent overseas away from the politics. He was getting most of his information second hand or from telegrams that don’t always convey the full meaning of what someone means. It is so much easier to mislead yourself on what someone thought when you are reading a telegram much the same way we misinterpret text messages or emails. The human face to face element is missing and so much communication is lost when you can’t read the other person’s facial expressions.

For the most part, Washington and the command staff of the army were hands off in regards to MacArthur. He was able to do what he wanted to do and, generally, with a lot less in regards to supplies than say the generals operating in the European sector of the war. 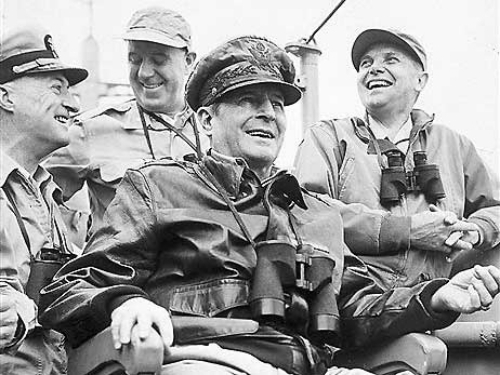 MacArthur still exudes that same confidence and swagger in Korea that we see in his face as a young man in World War One.

I’ve always been a bit hazy on what happened in Korea. Manchester is enamoured with his subject so he may have put a rather rosy spin on these events. It was the first modern war that the United States fought that was not really a war, but those now dreaded words... policing action. It is a first cousin to conflicts in Vietnam, Iraq, and Afghanistan, to name a few, that the United States have continued to mire themselves in clear up to present history. In World War Two objectives were clear--destroy the enemy and push them back to where they came from. In Korea, politics played such a heavy hand. The war became more about the struggles between politicians in China and the United States. The Koreans were pawns in a much larger conflict between communism and capitalism. 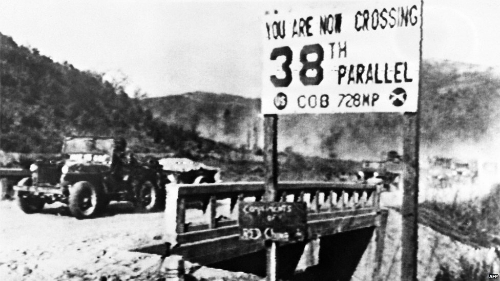 Manchester makes the case that a lot of the problems between MacArthur and President Truman stemmed from the fact that no clear objective had been handed down to MacArthur. What is considered a win? What are the objectives? I think that Truman was unsure about the right answers to those questions. I don’t think anyone expected as many Chinese to pour across the border in defense of the North Koreans either which changed the whole complexity of the situation and bordered on beginning World War Three. My uncle was in that war, and he described to me scenes of unarmed Chinese running behind the Chinese soldiers who had rifles, waiting to pick up their weapon when they were killed.

Crazy right? A type of crazy that is somehow sane in a country with people to spare.

He also told me about capturing Chinese “soldiers” dressed in rags, without wearing any shoes in temperatures below zero. The GIs would give them clothes and boots and as the trucks would leave to transport them to a prisoner-of-war camp, coats, shirts, pants, socks, and boots would come flying out of the back of the truck, out of ignorant fear that the US was merely trying to contaminate them with some deadly disease.

It was unnerving to be fighting people who were seemingly unhinged.

I can remember how irritated I was by the Rolling Stone article that lead to President Obama dismissing General Stanley A. McChrystal. Of course, it wasn’t difficult to draw comparisons to Truman’s dismissal of MacArthur in Korea. It was a very unpopular decision with the American public. In fact, Truman’s approval rating fell to 22%, which is still the lowest rating ever of a sitting president.

I think the problem lies in the amount of power that a commander has, running a war a long ways away from the civilian power in government. He has autonomy, and for most of MacArthur’s career, the president and joint chiefs of staff were willing to let him have as much power as he felt he needed. Korea was a political war, which also means that politicians were more concerned about everything regarding that war. They are worried about perception as much as they are worried about winning. Roosevelt was a man so comfortable in his own skin and also shared so many natural characteristics with the dramatic MacArthur that he could have probably handled the situation without creating a political nightmare for himself at home. Truman made assumptions about MacArthur’s intentions that also showed his own insecurities with his own political power.

MacArthur was wrong to embarrass Truman by communicating with Congress, but I really feel that he was trying to get some definitive answers about the overall objective they were fighting for in Korea. He wanted to make sure his boys were dying for the right cause. MacArthur might have been talking about WW1 when he made this statement, but it applied equally well to Korea. ”It’s the orders you disobey that make you famous.” Unfortunately, his dismissal from Korea cast a long shadow over a brilliant career.

MacArthur impressed me again in his twilight years when he begged President Johnson not to escalate Vietnam. He took one last stab at saving thousands of American lives, but unfortunately, Johnson was too insecure not to “stand up” to communism in Southeast Asia. 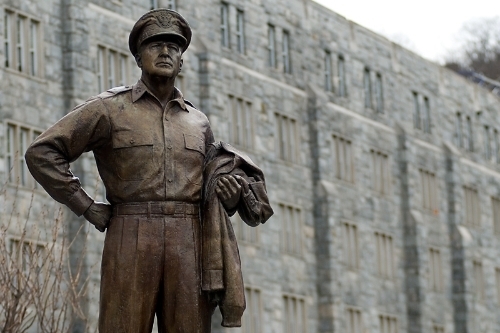 Statue of MacArthur at West Point.

There is always an ending, and MacArthur had one last chance to embrace the pageantry.

”I’m closing my fifty-two years of military service. When I joined the Army, even before the turn of the century, it was the fulfillment of all my boyish hopes and dreams. The world has turned over many times since I took the oath on the Plain at West Point, and the hopes and dreams have long since vanished. But I still remember the refrain of one of the most popular barrack ballads of that day which proclaimed, most proudly, that ‘Old soldiers never die. They just fade away.’ And like the soldier who tried to do his duty as God gave him the light to see that duty.’ The word was a hush: ‘Goodbye’.

After spending several weeks with Douglas MacArthur, I have to say that when I read his farewell speech I had a lump in my throat.

Posted by JEFFREYKEETEN at 8:29 AM No comments: