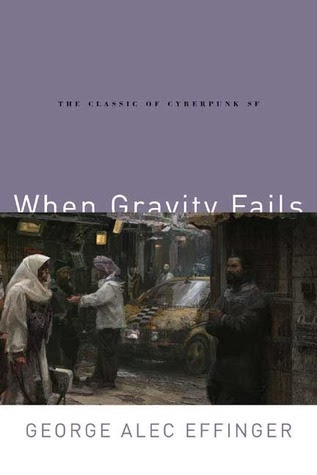 
In a decadent world of cheap pleasures and easy death, Marid Audrian has kept his independence the hardway. Still, like everything else in the Budayeen, he’s available…for a price.

For a new kind of killer roams the streets of the Arab ghetto, a madman whose bootlegged personality cartridges range from a sinister James Bond to a sadistic disemboweler named Khan. And Marid Audrian has been made an offer he can’t refuse.

The 200-year-old “godfather” of the Budayeen’s underworld has enlisted Marid as his instrument of vengeance. But first Marid must undergo the most sophisticated of surgical implants before he dares to confront a killer who carries the power of every psychopath since the beginning of time.

Wry, savage, and unignorable, When Gravity Fails was hailed as a classic by Effinger’s fellow SF writers on its original publication in 1987, and the sequence of “Marid Audrian” novels it begins were the culmination of his career.


In the 22nd century, the fiercely independent Marîd Audran is living in a dangerous middle-eastern city in the Budayeen. It is a rich, fascinating and diverse world where people can easily have their brains wired for “moddies”, plastic cartridges with different personality types, from fictional characters to celebrities, that are inserted directly into the skull and “daddies”, smaller add-ons that are inserted next to the moddies to enhance certain skills, like the ability to converse in other languages, and to depress certain physical and mental functions, like hunger, thirst or fear.

Marîd, son of a Frenchman and an Algerian prostitute, is proud of the fact that his brain is not wired, but instead relies on drugs and alcohol to alter his mood.

The story begins in Chiriga’s nightclub, where Marîd is supposed to meet a client from Reconstructed Russia, a Mr. Bogatyrev, who is looking for his son who was missing for three years. After Marîd receives a packet of money, holotapes, and a complete dossier of his son, a woman screams, a modified James Bond is waving a pistol, Marîd investigates and then returns to his table to find his client took a bullet in the chest.

The shooting becomes a police matter until Marîd’s acquaintances start dying off, one by one. Despite his distrust of the police, he is forced to work with them and then forced by Friedlander Bey, the city’s “Godfather” to undergo modification in order to more easily find the murderer.

This was a fun, gritty, and thought-provoking science fiction story with lots of great ideas about personality modification, knowledge enhancement and ease of changing genders that could be a very real possibility in our future. Some international intrigue caused the story to drag a little and the mystery to fall flat. I loved Marîd’s independence and honesty, though I fear that now he is under Friedlander Bey's control the things I like about him will change dramatically in the next book. I also loved the relationship between Marîd and Yasmin, his fully modified girlfriend who was not born a girl and can’t manage to be on time for anything, even after paying a $50 fine to the owner of the nightclub where she works when she is just a minute late.

I just wished the author used the same loving care in writing a satisfying conclusion as he did in creating this fascinating world.

Also posted at Goodreads
Posted by Nancy at 2:37 PM No comments: