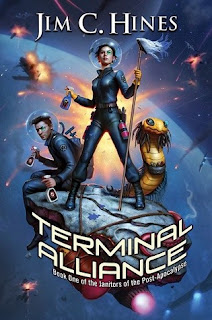 Jim C. Hines "Terminal Alliance" is a fresh funny take on the classic science fiction trope of smart humans seizing their rightful place in a galactic universe controlled by a higher technologically alien races. Its slightly reminiscent of Andre Norton's "Star Guard", a classic sf novel originally published in 1955, in which Terrans have finally joined a galactic empire but are not allowed by the aliens who control the empire to go to the Stars on their own, but are only used as mercenaries because the galactic empire fears humanities talents, but some resolute Terrans are not content with the hand they have been dealt.

In "Terminal Alliance", Earth has suffered a devastating plague, which causes most of humanity to revert to a feral state. The alien Krakau have sought to help humanity. They choose, modify and "re-educate" selected adult humans who are then sent to help the Krakua Alliance as mercenaries or as sanitation specialists aboard spaceships. The Krakua have bio-engineered the human survivors with super human reflexes and strength making them the perfect soldier for their alliance. So short of a spinal or head injury, they can continue to fight. They have also changed the human physiology to remove what they think are impediments, essentially giving everyone a stomach line for food intake, because the Krakua think human food is disgusting.

Hines audaciously focuses on a group of mop wielding sanitation specialists with an expertise in cleaning machines, plumbing and spills as the main characters who have to thwart an alien plot aimed at their crewmates and the Krakua. And he pulls it off superbly.

Twelve years after being "re-educated" by the Krakua, Mops Adamopoulus is a Lieutenant and commander of a small Shipboard Hygiene and Sanitation janitor team (SHS) on the Pufferfish, a Krakua space cruiser. During a small military action, some human crew members are infected with something and start to revert to ferals. It appears that they have taken out the Krakua command crew leaving Mops in charge of the Pufferfish with just her small contingent of janitors and a single alien Gron, a Glaciade, who rather play space invader like video games, facing the enemy Prodryans and having to fend off the ferals as well. Mops is supported by her AI Doc, a computer linked to the shipboard systems that Mops has upgraded, Wolf, a muscular crew mate who wishes she was a mercenary and Monroe, the ex-mercenary with a metal arm.

Mops and her team are soon on the Krakua wanted list, who want to "put down" the 200 feral humans on the Pufferfish. Forced into unfamiliar roles, Mops goes in search of the Prodryans, who infected her crew. Figuring out how to use the ship weapons, space battles, dealing with multiple alien species on an space station. Hines powers the story using wit and verve. Mops soon learns a Krakuan secret about how humanity devolved into ferals on Earth. We may not have caused the plague.

Six months after my first read, I zoomed through the book again this week. It's just a great fun unconventional read. The Janitors are taking over the Universe. Watch out.
Posted by Jeffrey Wendler at 11:14 AM No comments: