MR. PENUMBRA'S 24-HOUR BOOKSTORE
Robin Sloan
Read September 2013
Reviewed by Carol
★  ★  ★  1/2
Authors are magicians. I was in the early pages of Mr. Penumbra when I realized that Sloan was sneaking in a major chain of events in only a few short paragraphs with the intention of moving the story to where he needed it. It was the authorial equivalent of "look, nothing up my sleeve" in preparation of a hat trick. Rather than irritation from this momentary flap of curtain or glimpse of rabbit ear, I was rather captivated.

Thinking back on books I've loved or hated, it occurs to me that in that moment of authorial sleight-of-hand, the reader willingness to accept the underlying set-up is fundamental to the experience of the story, particularly in fantasy, sci-fiction and magical realism. A suspension of belief at the right parts, or at least belief enough in the presentation to accept and enjoy it, is crucial to a good read.

Penumbra is charming, and it was easy to be interested in Clay's search for a job, intrigued by the mystery of the bookstore, and captivated by the charisma of Clay's friends. Eventually, Sloan reaches a bit too far, tries a large-scale trick that requires more stage presence and set-up than he can pull off. In particular, the New York section started to feel like someone imported The Da Vinci Code. It's the equivalent of seeing a magician at the local theater and watching them try and disappear the Empire State Building. The story veers out of control and falls apart, yet still manages to remain charm and sincerity to be worth reading.

Part of Sloan's skill is in his ability to capture familiar emotion. I remember those days when I had job-idealism:
"But I kept at it with the help-wanted ads. My standards were sliding swiftly. At first I had insisted I would only work at a company with a mission I believe in. Then I thought maybe it would be find as long as I was learning something new. After that I decided it just couldn't be evil. Now I was carefully delineating my personal definition of evil."

There's a lovely, lovely description of a bookstore, instantly familiar to any book-lover:
"The shelves were packed close together, and it felt like I was standing at the border of a forest--not a friendly California forest, either, but an old Transylvanian forest, a forest full of wolves and witches and dagger-wielding bandits all waiting just beyond moonlight's reach.

A description of Clay's co-worker, Oliver, instantly resonated with that interesting dualism of solid and dreamy:
"Oliver is a graduate student at Berkeley, studying archeology. Oliver is training to be a museum curator... He speaks in short, simple sentences and always seems to be thinking about something else, something long ago and/or far away. Oliver daydreams about Ionian columns."

I too have a nebula friend:
"So I guess you could say Neel owes me a few favors, except that so many favors have passed between us now that they are no longer distinguishable as individual acts, just a bright haze of loyalty. Our friendship is a nebula."

I also have to commend both Clay and Sloan for writing a meeting of a love interest that involves hair, tee-shirt, nail and chipped tooth, culminating with:
"This girls has the spark of life. This is my primary filter for new friends (girl- and otherwise) and the highest compliment I can pay."

Despite the strong, delightful beginning, Sloan lost me by the end. I thought the quest metaphor was clever, and appreciated the connection with a fantasy trilogy and friend that was instrumental in Clay's formative years but it didn't quite stretch far enough. Or maybe it did, and the quest was an illusion. It's hard to say; Sloan was showing his hand too much by the end and the spy caper didn't fit with the sweet bookstore mystery. The romance was lost in the quest, and imperfectly resolved. Neel's professional fascination with boobs struck me as a false note, although it had the feel of a ten-year-old voyeur over the thirty-year-old creeper. My final complaint is rooting the story so solidly in Google; perhaps integral to Sloan's version of the story, it significantly roots it in time and will date it faster than any other element. For me, these concerns added up to too many wires and mirrors, and allowed me to lose the illusion.

Three, three and a half stars.
Posted by carol at 4:16 PM No comments: 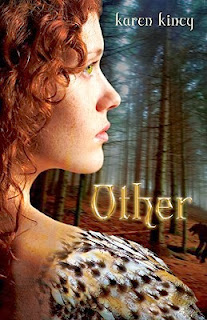 Other
by Karen Kincy

Seventeen-year-old Gwen hides a dangerous secret: she’s Other. Half-pooka, to be exact, thanks to the father she never met. Most Americans don’t exactly roll out the welcome mat for Others, especially not the small-town folks of Klikamuks, Washington. As if this isn’t bad enough, Gwen’s on the brink of revealing her true identity to her long-time boyfriend, Zack, but she’s scared he’ll lump her with the likes of bloodthirsty vampires and feral werewolves.

When a pack of werewolves chooses the national forest behind Gwen’s home as their new territory, the tensions in Klikamuks escalate--into murder. It soon becomes clear a serial killer is methodically slaying Others. The police turn a blind eye, leaving Gwen to find the killer before the killer finds her. As she hunts for clues, she uncovers more Others living nearby than she ever expected. Like Tavian, a sexy Japanese fox-spirit who rivals Zack and challenges her to embrace her Otherness. Gwen must struggle with her own conflicted identity, learn who she can trust, and--most importantly--stay alive.

This is a really interesting world that Kincy's put together. Fantasy creatures like centaurs and fairies are real, and increasingly public in their lives. Aside from the Others (or people with a paranormal identity, which is fabulously PC), this is recognizably modern America. Considering that Kincy doesn't give her supernatural characters much in the way of extraordinary powers, this isn't exactly X-Men. Or maybe it is, because The Others is mostly about the sort of prejudice that one would expect to spring up when people discover that vampires, werewolves, and shapeshifters are real. People staring at the centaur in the supermarket? Naturally. Pray the fey away church groups? Sadly, yes. A serial killer who pointedly poses his Other victims in ways that suggest their exact paranormal natures? I can see this happening.

Kincy's worldbuilding is the strongest part of the book. Granted, it is mostly our world as we know it, but the way people react to the Others is consistent and makes sense. She also handles the various abilities (and weaknesses) of the Others in a way that's internally consistent and mostly consistent with the stories that her readers will be familiar with. That said, she also ventures outside the usual suspects that pop up again and again in fantasy. There are werewolves, sure, but main character Gwen isn't one. She's a pooka, a Welsh shapeshifter that I doubt many readers in the target audience would have heard of before. Gwen's friend Chloe isn't a fairy, she's a dryad. Honestly, I get sick of book after book being about werewolves or vampires, and it's nice to see some variety.

That said, how much you like this book will depend almost entirely on how much you can bring yourself to like Gwen. I did end up liking her, mostly, but she could be frustrating. She has believable flaws, even if they can be irritating. It can be very annoying to watch her cling to her prejudice against Others that are made (like vampires), not born (like herself- her father was a pooka). And yet, I entirely believe that growing up as she did, in the culture that she did, she'd feel judgmental towards those she sees as making her own life harder. I never felt like the author agreed with her in the slightest, or felt that we should, which made it bearable. The way she handles her relationship with boyfriend Zack (who does not know that she's a pooka) made me want to shake her sometimes, but it's also painfully realistic. How many girls hide important things about themselves from boys they love, out of the fear of losing them?

That said, I had a harder time with how doggedly Gwen stuck with her initial impression that a werewolf Chloe is dating must be a bad person. Of course, she's basing it off of negative werewolf stereotypes, and of course those stereotypes have been heavily ingrained in her. But after awhile, it stops making any sort of sense that Gwen would still be convinced that a werewolf is behind the Other murders, and especially not this werewolf. And yet it takes her almost the entire length of the book to come to grips with that. I was also surprised with how she kept trying to find the killer, against all reason. And speaking of less than wise decisions, how about shapeshifting openly, outdoors, on a sunny day? When you know that somebody is stalking and killing Others in your hometown, shouldn't you be more cautious?

I like the world that Kincy has created, and I think it holds together. I'm torn about her main character. Gwen can be very hard to like, but it's also easy to see why she is the way she is. It seems that other books in the series have different narrators, so I may try those, too.