I Kissed a Zombie and I Liked It 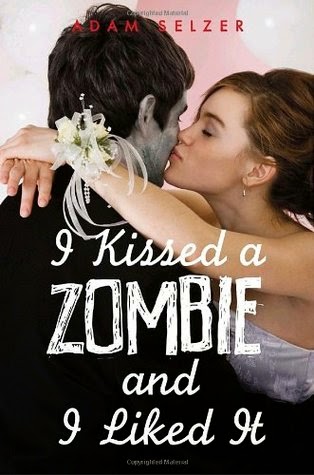 
Algonquin “Ali” Rhodes, the high school newspaper’s music critic, meets an intriguing singer, Doug, while reviewing a gig. He’s a weird-looking guy—goth, but he seems sincere about it, like maybe he was into it back before it was cool. She introduces herself after the set, asking if he lives in Cornersville, and he replies, in his slow, quiet murmur, “Well, I don’t really live there, exactly. . . .”

When Ali and Doug start dating, Ali is falling so hard she doesn’t notice a few odd signs: he never changes clothes, his head is a funny shape, and he says practically nothing out loud. Finally Marie, the school paper’s fashion editor, points out the obvious: Doug isn’t just a really sincere goth. He’s a zombie. Horrified that her feelings could have allowed her to overlook such a flaw, Ali breaks up with Doug, but learns that zombies are awfully hard to get rid of—at the same time she learns that vampires, a group as tightly-knit as the mafia, don’t think much of music critics who make fun of vampires in reviews. . . .


I remember coming across this book on Thomas' shelf and briefly thought about picking it up at the library. The title, cover, and Thomas’ lukewarm review made me decide to give it a pass. Now that I’ve discovered OverDrive and am in the mood for zombie stories, I decided to give this book a chance and borrowed the e-version. Though I still had my doubts after looking at the cheesy cover, I pressed on. I finished the story in one day and was surprised by how funny, sweet and smart it was.

Alley, along with the group at her lunch table, is on the staff of the school paper. She is living in the “post-human” era, in a world where vampires, werewolves, and zombies live amongst humans. Like other oppressed minorities, their struggle for basic rights and acceptance is a constant uphill battle. In this world, dating the undead is cool, but Alley stubbornly clings to her independence and harshly ridicules the idiotic behavior of her classmates.

“Sadie is my oldest friend. She kind of falls for the whole vampire thing, but at least she’s realistic. She likes dead guys, just like every other girl in school, but Marie loves them. She isn’t even interested in dating living guys. She’s like, necrosexual.”

When Alley is asked to review a local band’s performance, she’s intrigued by Doug, a part-time member of the band, whom she later learns is a zombie.

Alley learns that liking the same musicians is not enough to sustain a relationship. She must deal with resistance from school officials and other “post-humans”, and her own changing views about life and love.

At times, Alley’s voice seems a little too mature for her age, at other times she is as fickle as teenagers are, but I have to admire her independence and strength of character.

There are a lot of strong messages in this story about acceptance, relationships, and maintaining one’s identity.

I’m surprised I enjoyed this as much as I did.