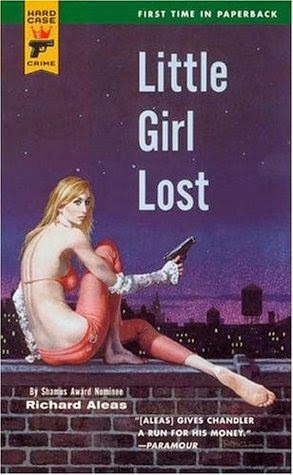 
Miranda Sugarman was supposed to be in the Midwest, working as an eye doctor. So how did she wind up shot to death on the roof of New York s seediest strip club? It s up to detective John Blake to uncover his ex-girlfriend s secret life as a striptease queen. But the deeper he digs, the darker the secrets he uncovers, until a shattering face-off in an East Village tenement changes his life forever.


Little Girl Lost begins with private investigator John Blake scanning the headlines and learning of the brutal death of his high-school sweetheart, Miranda Sugarman, who was most recently working as a stripper. When they were in high school 10 years ago, she had ambitions of attending college in Los Alamos and eventually working as an ophthalmologist.

John Blake is young and idealistic, a refreshing change from the traditional hard-boiled, world-weary, cynical older detectives so prevalent in this genre. His youthful and clean-cut looks are out of place in the violent, sordid and grimy urban environment he has to work in. John encounters a lot of unpleasant characters while he is investigating this case, but he also has help from some good people, his boss, Leo, who is a former cop, and Susan, a stripper who knew Miranda and demonstrates a strong aptitude for detective work.

This was a very well-written, suspenseful, and atmospheric crime thriller. Some of the clues were a little too heavy-handed, making it relatively easy for me to figure out who the murderer was, but I enjoyed revisiting the city I grew up in, the characters, the situations, and John’s strong sense of justice and deep feelings for the woman he once loved.

This is the first Hard Case Crime book I read, and I look forward to more.

Also posted at Goodreads.
Posted by Nancy at 5:00 AM No comments: