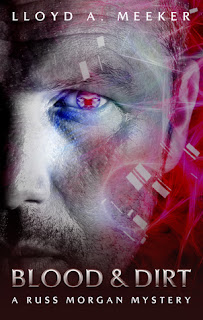 Lloyd A. Meeker
Wilde City Press
Reviewed by Nancy
5 out of 5 stars

Family squabbles can be murder.

Psychic PI Russ Morgan investigates a vandalized marijuana grow in Mesa County Colorado, landing in the middle of a ferocious family feud that’s escalating in a hurry. Five siblings fight over the family ranch as it staggers on the brink of bankruptcy, marijuana its only salvation. Not everyone agrees, but only one of them is willing to kill to make a point.

Russ also has a personal puzzle to solve as he questions his deepening relationship with Colin Stewart, a man half his age. His rational mind says being with Colin is the fast track to heartbreak, but it feels grounding, sane, and good. Now, that’s really dangerous…

Even though I was assured this story was a standalone, I’m a stickler for order. So I purchased and read Enigma, the first Russ Morgan mystery, and was even more excited to read the second in what I hope is going to be an ongoing series.

Ellis Landry hires Russ Morgan to find out who vandalized his sister’s marijuana grow. What starts out as a simple investigation of a vandalism incident turns out to be much more complicated as Morgan assesses the dynamics of the Ellis/Landry clans using his empathic abilities and, as other facts and feelings begin to emerge, he decides to carry a firearm.

When Russ is not unraveling a tangled web of lies and deception, he is scared of his developing relationship with Colin Stewart, a paralegal he met during his first case, and a man nearly half his age. Russ has achieved sobriety, but still deals with pain from his past. Fortunately, Colin is very patient and mature for his years.

This was a clever, engaging, and thoughtful mystery that deals with toxic families and the fragility of new relationships. I loved the first-person narration of this story that allowed me to connect with Russ on a deeper level and I enjoyed alternating glimpses of his professional and personal life. He’s a very likable, well-rounded character who is easy to spend time with.

I very much look forward to more Russ Morgan stories.
Posted by Nancy at 3:13 PM No comments: