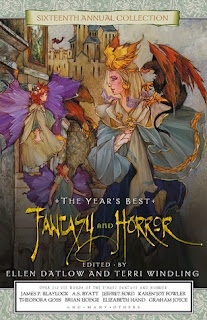 Rounding out the volume are the editors' invaluable overviews of the year in fantasy and horror, Year's Best sections on comics, by Charles Vess, and on anime and manga, by Joan D. Vinge, and a long list of Honorable Mentions, making this an indispensable reference as well as the best reading available in fantasy and horror.

My Review
I've always liked short stories. They are a great way to fit in a good read when reading time is limited or you just want a tasty morsel you can finish quickly. The whole problem with them is balance. Considering I grabbed this by mistake, thinking it was a fantasy, sci fi mix and not horror, it turned out a lot better and more balanced than a lot of anthologies I have read.

That might have to do with the editors. Datlow and Whitling have done not only a fine job of selecting the authors but also which of their stories were included in this volume. While not all were my cup of tea I can say that the majority of the writers managed to convey the mood they wanted in a short amount of time.

A couple of my favourites were represented, such as Gaiman and Murikami, but I've also discovered a few new authors that I've had on to read lists but now will now get bumped up the list a lot faster. China Mieville, Jeffrey Ford and Brian Hodge come to mind.

It's odd because I've already forgotten the misses in this book and can only remember the hits. Maybe that says something about the calibre of writing. A must read on Halloween night!
Posted by Zorena Deckard at 10:00 AM No comments: 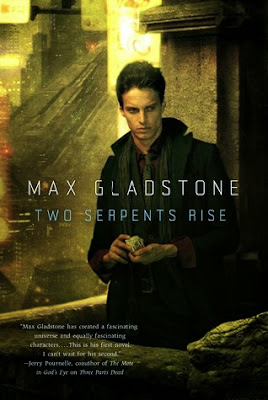 A burgeoning desert city, Dresediel Lex depends upon Craft and the power of fallen gods to quench its ever growing thirst. When demons are planted in the city's water supply, Red King Consolidated, the utility that provides water to the city, suspects religious fanatics eager for the return of the gods or good old-fashioned corporate competition. Caleb Altemoc, a risk manager for the omnipresent Red King Consolidated and son of Temoc, a wanted religious terrorist, is sent to investigate. He soon finds himself falling for a potentially dangerous woman, questioning his loyalties to his employer and to his father, and learning that the deified twin serpents of Dresediel Lex survived the God Wars and slumber as they await an eclipse that will awaken a hunger that can only be sated with blood sacrifice.

Two Serpents Rise returns us to the world--if not the characters and city of Alt Coulumb--presented in Three Parts Dead, and this is a brilliant move on the part of author Max Gladstone. Neatly side-stepping the tendency of many authors to get locked into one character and a formulaic plot structure for a never-ending series, Gladstone continues to create this unnamed world of magic and technology that is at once primitive and futuristic, where humans and gods coexist. This world provides Gladstone with a broad canvas for his impressive, imaginative world-building, and he is at his best when writing of the terrible majesty of the gods, as fantastically varied as the cultures that spawn them. However, these gods, brought into existence by man's faith, have been destroyed or harnessed after the God Wars, when mankind realized they could kill what they had created or restructure the power of the gods to serve the needs of modern man.

The mythologies created by Gladstone capture the primal need for the divine and the rational, "civilized" mind's rejection of religious fanaticism--a dichotomy represented in the character of Caleb. The son of a once powerful Eagle Knight priest desperate to cling to the old ways of blood sacrifice, Caleb rejects the brutal and barbaric religion of his father, but is uncomfortable with the manner in which defeated gods have been utilized by concerns like Red King Consolidated to meet the needs of the people. As Caleb seeks the source of the water contamination, he must come to moral terms with Dresediel Lex's problematic history and the cultural divide created in the wake of the God Wars. Caleb's contentious relationship with his father provides the novel with more depth than one might expect of a standard fantasy novel, and I found myself wishing that Gladstone had jettisoned Caleb's strained, awkward, and perplexing romantic relationship with Mal in favor of more interaction between father and son.

The mystery at the core of Two Serpents Rise, when stripped of its magical accouterments, is fairly standard, but serviceable to moving the plot forward. There are few surprises and maybe a few too many red herrings and segues into nonessential plot elements, but these quibbles are fairly minor when stacked against the entertainment to be found in exploring Gladstone's complex, layered world.
Posted by Amanda at 5:30 AM No comments: