That Warm and Fuzzy Feeling 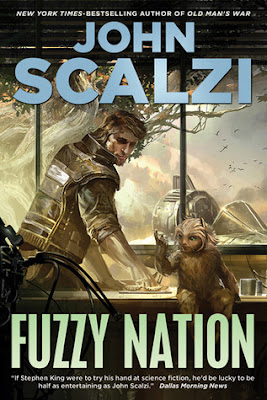 I have never read a John Scalzi novel before, but I certainly don't think this will be my last. Fuzzy Nation is apparently a "reboot" of an earlier science fiction classic, although that's a novel with which I am unfamiliar (so I can't offer any comparisons to how Scalzi's reimagining of the novel measures up to the original). What I can say is that Scalzi's novel is both humorous and thought-provoking.

Fuzzy Nation is set in a future where mankind has successfully managed deep space exploration to the point where we colonize other planets. Of course (and I don't think this is too far off the mark here because, as a species, we are avaricious bastards), our only interest in other planets is purely economic--we strip these planets of the natural resources we've depleted from earth and then we toss the planet aside like a banana peel and move on. This has led to the creation of mega-corporations, Zarathustra and Blue Sky, which make trillions off of their outer-planet mining industries. But ecologists have begun to take note and these corporations find their greedy little hands inconveniently bound by an ever-broadening range of EPA style rules and regulations, the most significant of which is that mining may not take place on planets that have been proven to have sentient life--at any stage in the evolutionary process.

Those who colonize these planets are migrant contractors and surveyors who move where the work is. Jack Holloway is one such contractor. Working for ZaraCorp, Jack is a misfit who seldom responds to anything appropriately, is purposefully antagonistic, and speaks sarcasm as if it's a second language. Jack is an asshole, a quality which I find endearing because he's amusing and you get a sense that, for all of his self-centered swagger, he's actually a moralistic asshole when it matters. The conflict of the novel centers on Jack, who has just discovered a seam of sunstone that could make him (and the generations who come after him) ridiculously wealthy. The problem? He has also just discovered the fuzzys, a cat-like animal that, as the novel goes on, may prove to be sentient. This pits Jack against his former girlfriend (the on-planet biologist), the corporation that must share the wealth with Jack (and whose ruthlessness may imperil Jack's life), and his own self-interest.

Where the novel goes depends upon whether Jack really is a good guy or not, a point that always seems debatable, which is why the use of an anti-hero as the main character is a stroke of genius. The reader hopes Jack will do the right thing, but can never be definitively certain that he will. The other bit of genius is that the evidence suggesting the fuzzys may be sentient is doubtful at best and this ambiguity also calls into question when and how do we decide that life is expendable and when it is not. Overall, I think Scalzi pulls off something very rare in fiction: a novel that makes you think about important issues without being overly preachy and also allows you to laugh along the way.
Posted by Amanda at 1:03 PM No comments: The Publisher Says: In his novel Mainspring, Lake created an enormous canvas for storytelling with his hundred mile high Equatorial Wall that holds up the great Gears of the Earth. Now in Escapement, he explores more of that territory.

Paolina Barthes is a young woman of remarkable intellectual ability – a genius on the level of Isaac Newton. But she has grown up in isolation, in a small village of shipwreck survivors, on the Wall in the middle of the Atlantic Ocean. She knows little of the world, but she knows that England rules it, and must be the home of people who possess the learning that she so desperately wants. And so she sets off to make her way off the Wall, not knowing that she will bring her astounding, unschooled talent for sorcery to the attention of those deadly factions who would use or kill her for it.

My Review: You know an idea is good when the rating for the middle book in a trilogy is this close to the first book. The Clockwork Earth is a fine idea. It can bear the weight of different viewpoints and stories set in its boundaries and constrained by its rules, which means it's about ten times better thought out than most books in any genre.

Hethor's inspiration in Mainspring, the librarian Emily Chambers, shows up here; so does the Basset's Chief Petty Officer al-Wazir the Scot (!); and out third main actor, Paolina Barthes, is met at her native village on a Muralha -- the Wall that the great brass gears of the Universe run atop.

You see, the Universe is a clockwork mechanism, a brass-bound orrery of a place, and the Wall separates for all eternity the halves of God's Creation into Northern and Southern worlds. They are largely unknown to each other, and the Wall that separates them, in addition to being quite dauntingly high, is rife with God's odds-and-sods of Creation: monsters, to the English who rule the Northern Earth.

Paolina, on meeting the shipwrecked loblolly boy from the Bassett when he's brought to her village, receives her summons to greatness. She is a genius, you see, a wasted force in her tiny village. She knows it, the village knows it, but Clarence merely knows he can't go on and can't quit either. He divests himself of his chronometer to Paolina, in thanks for her rescue of him from certain death at the hands of the village elders.

And thus begins the tale of the gleams, the clockwork mechanisms that Paolina (a quick study and a brilliant scientist) creates. They are capable of resonating with the clockwork gears of the Universe, of influencing and controlling them. Of course the avebianco, Emily Childress's order of mystical practictioners and wardens of the balance of the world, wants to know what is going on. As do the Chinese, the enemies of the British. And of course the child's immense giftedness causes problems and creates death and chaos.

And in the end, isn't that where we all are? A giant gap between North and South, an absence of even the possibility communication, and vast power that can change or destroy the entire Universe as we know it, is wielded by a mere child. (Keep in mind this book was written during the Bush presidency.)

As Lake weaves a story of Paolina's voyage in the world beyond the Wall she grew up on, it pays to think a bit about what she is doing. Her immense native talent is sought after by the powers that be in her world. She's never given a moment to think through her actions to create results. She has to move, keep moving, stay one step ahead of people who want to control her and thus her gift for one purpose only: Their own gain. Victory for them. Dress it up how you like, Paolina is expendable so long as her knowledge is secured for Us to use against Them.

Her moral quandary (is it ever right, ever moral, to hand one party to a competition the full and complete means of winning?) is, but by bit, honed into a sharp blade for her defense of herself. Merely asking the questions she's forced into asking herself is an act of fiercest rebellion in a clockwork universe, ordered by God.

Emily and al-Wazir play their roles in moving Paolina from place to place, and face a few difficult moments themselves, but make no mistake: this is Paolina's book. That's it's strength and its weakness. The characters are as fully realized as the authorship of Lake can make them, which is well and truly rounded. That doesn't prevent them from being means to an end. Emily, as a powerful figure in the avebianco (White Birds), is a woman in charge of a huge amount of influence in the world; her interest in Paolina is natural; but the demands of the story leave Emily in a teacher's role again, as with Hethor in Mainspring. It's true that this time she plays a more central and significant teacher's role, but she's still mostly a means to move the story from pillar to post.

Which is what happens a lot. We're on the move at all times. Sometimes that feels more like being on a transcontinental train trip than it does like a walk through a garden. That's a good thing, of course, for interest's sake, but not always comfortable reading. The Chinese don't come in for much development, and the settings can become a bit blurred together because the drama is so high.

Why complain about that? Because the settings are so unbelievably COOL! I want more! More! Each time we're in an airship, I want more. Each port of call, I find out enough to make me want more! I have expositionus interruptus and, like the thing that phrase is modeled on, satiation and satisfaction are not to be had.

So I knocked a few points off the score, so what. It's still a terrific book. And one thing I am sure of, the sequel (Pinion) and me are gonna have some quality time together. Soon.

This work is licensed under a Creative Commons Attribution-NonCommercial 3.0 Unported License.
Posted by Richard at 2:30 AM 6 comments: