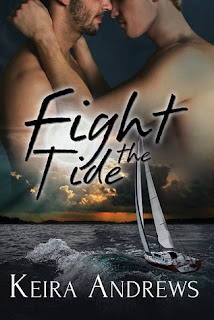 Adrift in a post-apocalyptic world, they only have each other. Is it enough?


A virus that turns the infected into zombie-like killers spreads through a burning world thrown into lawless chaos. Lovers Parker and Adam have escaped to the open sea when they hear a message over the airwaves from a place called Salvation Island—a supposed safe haven.

Orphaned as a child, werewolf Adam has always longed for a pack. He’s eager to investigate the island, but Parker doesn’t think for a nanosecond that the voice on the radio can be believed. He doesn’t trust anyone but Adam and is determined to keep it that way. They don’t need anyone else complicating their struggle to survive. Or do they?

Danger on the high seas can surface in a heartbeat, and if Parker and Adam aren’t careful, the current will drag them under.

I complained that Kick at the Darkness, the first book in Keira Andrews’ zombie apocalypse series was lacking in the horror elements and thrilling action scenes that I expect from zombie novels. It is a horror-romance, with the romance front and center, so I should have known better than to expect the gore-fest in Brian Keene's stories. Despite my criticism, I still enjoyed the growing relationship between Parker and Adam along with the difficulty of trying to survive in a changing world.

The second book in the series was even more sedate, yet I was surprised to find that I enjoyed it considerably more. Parker has accepted that Adam is a werewolf. Adam’s keen eyesight and extra strength come in handy when watching for possible threats or fighting off zombies. Adam is sweet, protective, and considerate of Parker. Now that he’s not hiding who he is, he has become a much more open and warmer person. There is some backstory about Adam’s past, the isolation he grew up with, and the untimely death of his family. His wolf craves the warmth and love of a pack.

The opportunity comes when Parker, despite his misgivings, responds to a radio call from a family whose boat is in danger of capsizing during a storm. Earlier on, while Adam is making a supply run and Parker is alone aboard Bella, pirates sneak up on him, conk him on the head with his own pistol and make off with his supplies. The physical assault and humiliation Parker endured has left him deeply suspicious of other people.

Though it takes time for Parker to warm up to the newcomers – Craig and his daughter, Libby, Craig’s girlfriend, Abby, and her teenage son, Jacob – they end up bonding and working well together. The secondary characters were very well developed and memorable, so when bad things start to happen, the tension really ramps up.

Though Parker feels at times that he is not enough for Adam, his character has matured significantly. He’s not the snarky, annoying youth he was in the beginning. He is an adept sailor, his survival skills have improved, and he is developing a relationship with the family in his care, particularly with the pimply and stubborn Jacob. The growth of Adam and Parker was one of the most enjoyable parts of this story for me. Their sex was hot, intense and loving. There was a fisting scene, lovingly written and helping to further develop the trust between Parker and Adam.

When Jacob is injured, they can no longer ignore that seductive voice on the radio beckoning them toward Salvation Island. Finally, there is a chance for security and the pack that Adam needs. Do they continue on their journey, or risk the possibility of entering a trap?

Though the story ends hopefully for our main characters, I’m glad to know their journey is far from over.
Posted by Nancy at 7:00 AM No comments: