It's that happy-clappy time again! Banned Books Week draws attention to the many and various attempts to censor what kind of reading material is available to you, me, our kids, our grandkids, and the banning parties hope, posterity. Books that talk about S-E-X or the right of women to walk down all the streets of the world without fearing rape or the existence of this little thing called "science" that rejects your religion's once-upon-a-time version of Creation.

In the long run, it doesn't work. In the short run, it's hideously costly in human emotional terms, titanically wasteful of time, effort, and resources to police and enforce, and morally repugnant to right-thinking people.

But it doesn't stop at formal banning of a book, governmental or religious anathema pronounced upon a writer, a press, a book...those things, while reprehensible, are formal, out there for the public to see and hear and (theoretically) obey. More insidious is a behavior that's meant to fly under the radar, and when discovered, covered up by (factually correct, morally wrong) justifications like "Oh look how few people are actually affected!" and "Most of you will never know it's even there!" and "It's my {concrete noun} and I'll do as I goddamned well please with it."

Next time it will be. Or the time after that. Or the one after that. Because if I've learned nothing else in 54 years of relatively constant annoyance by earthlings, I've learned that Command and Control NEVER EVER STOP WANTING MORE.

Specifically, I'm completely panitwadulous over the latest Goodreads self-inflicted PR wound. Last Friday, after the world has gone to weekend footing, Goodreads dumped the news of a major change in Terms of Service as they affect what reviewers...the unpaid volunteers who create the value that Amazon paid for the company to get!...can and cannot say to/about authors in their own reviews, and even more troublingly, what the reviewers can and cannot name the shelves or collections they put their books into.

I don't know if anyone on their staff expected the strength and passion of delivery of the vitriol that the sheeple (irony there!) of the site unleashed on this decision. If they did not, they were not paying attention to the titanic kerfuffle when Amazon bought Goodreads. Twenty-five hundred posts (mostly) of outrage and fear didn't make an impact? Not even the Ugly Green Button contretemps, with 2350 posts, made a dent?

Goodreads folk are passionate and committed readers and writers. And the reason they've...we've...invested so much emotional energy in the site is, at base, simple. It's the only one of its kind, the only place where readers connect with other readers by means of reviews, groups, and serendipity. Competitors to Goodreads are a great deal smaller, they're often focused around special interests (eg, LibraryThing, that unparalleled book cataloging site, with a sideline of social activity that's very much not encouraged), or they just haven't got the chops to make the ease and fluidity of opinion discovery on a par with Goodreads.

So naturally change will be resisted and feared by many, and just as naturally the Powers That Be will seek to direct the community's attention to such areas as will benefit the advertisers and/or owners who pay the bills. Some tension is inevitable, some compromise desirable on all sides. But to date, no compromise has been offered on any issue of site governance I've cited here. The policy announced Friday that announces Goodreads can and will delete user-created information at will and without warning is in place. The mea-culpa issued today with a reassurance that they won't delete stuff without warning again isn't, it appears, part of the formal policy yet.

This is put in place, we're told, because Goodreads wants to maintain a TONE, an atmosphere, of respect and tolerance. Because nothing says respect and tolerance like unilaterally changing a community-wide policy with a dump-and-run message on Friday afternoon, in a group that much less than 1% of the user base belongs to, right?

Still, it's their (well, Amazon's) site and they set the rules, right? Right. They do. And they offer the service to us for free, right, so they pretty much deserve to have a completely free hand, right?

I tweeted about this today, hoping to get some interest from Big Bloggers. Total response: One dismissive snort that essentially said, paraphrasing here, "suck it up Buttercup, if you're not the paying customer you're the paid-for commodity."

In BANNED BOOKS WEEK an example of censorship gets that kind of response. Wow.

Talking about books freely and without censorship, whether internal or external in origin, is as important an activity as reading the damn things. If no one talks about Mein Kampf, or Man and Superman, or The Nicomachaen Ethics, why kill the trees to print them? Why dedicate the bandwidth to delivering the files to the ereader screens? If people care enough to read even one book a year, shouldn't they be encouraged and supported in a desire to discuss it?

And that's what Goodreads was. Was. I have to use the past tense. It WAS this. It is now a data farm and sales platform for a bookselling entity. (Whose customer I am, by the way, and will continue to be, because I exist on less money per month that most of you make in a week.) And sales are hurt, the conventional wisdom goes, by shouting. Yeah, Paula Deen's racist language hurt her: Sales of her books, what, tripled? It was her publishers who said "ciao" and not the customers.

Which is its own level of icksome. But the point I'm making is simple: Stifling one, twenty-one, a million and one, people's willingness to speak honestly and from the heart about the ideas, the words, the feelings expressed in a book, by an author, is stealing from the rest of us who are unaffected the very necessary challenge of understanding, if never accepting, a different point of view. You may not ever agree, you may even like the opposition less than you did before you understood them better. (This happens to me with religious stuff all the time.)

But you still lose when ANY voice is silenced, out of fear or obedience or...worst of all...despair. How many honest reviews, negative to the author's feelings and even insulting in language, will now not be written? How many conversations will go un-had? (I've learned a lot from arguing my point on my most vitriolic reviews.)

Ray Bradbury said it best: "You don't have to burn books to destroy a culture. Just get people to stop reading them." And talking about them. And now there's no safe place to do that with the size audience, with their wallets ready to spring open.

The decline, it would seem, has accelerated, and the fall is imminent. I'm sad about that.
Posted by Richard at 5:03 PM 8 comments: 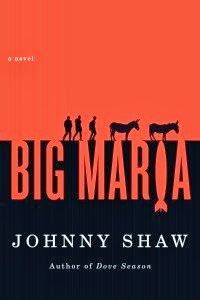 (Note: I am re-posting this review in honor of the fact that the book won the Anthony Award for Best Paperback Original Novel at the Bouchercon Convention last Saturday night. The award and the convention are named for Anthony Boucher, a critically important early reviewer of crime fiction, and Bouchercon is the biggest gathering of crime fiction fans and authors annually. The award is one of the most prestigious in the crime fiction field and couldn't go to a more deserving author.)

This is Johnny Shaw's second novel, following his excellent debut, Dove Season. Again Shaw demonstrates his gift for weaving pathos with drop-dead humor and his ability to create memorable characters who are very sympathetic even though most of them are total losers.

While obstacles like this might deter lesser men, Harry, Rickey and Frank press on against all odds, determined to find the fortune that will set their lives on a brighter path. It's an incredible journey, often touching and hilariously funny within the same paragraph. And it speaks volumes to the dreams and to the bonds that drive and inspire all of us.
Posted by James L. Thane at 10:29 AM No comments: