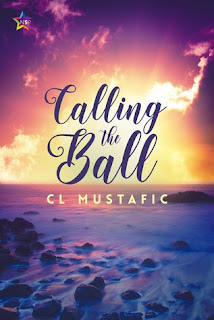 C.L. Mustafic
NineStar Press
3 out of 5 stars
Reviewed by Nancy

A vacation to the sunny, seaside, resort city of Durres, Albania puts some space between Henrick Kohler and his closeted ex, Klaus, giving him time to get his life back together. While there a chance run-in with superstar footballer, Valentino ‘Tino’ Alessi, sends Henrick running in the other direction. With no intention of being either another notch in someone’s bedpost or their secret lover, he offers friendship but nothing more. He doesn’t want to risk his heart with what he sees as just another Klaus, but with the added ability to ruin his life on a much more spectacular level.

Tino can’t catch a break, even doing a nice thing for a fan lands him in hot water. When he’s suspended until his latest mess is straightened out, Tino does the only thing he can think of—he goes holiday home hunting in his favorite resort town. Tino falls hard and fast for the blond Austrian who wants nothing to do with him romantically, but he accepts the offer of friendship when his efforts to woo Henrick get him nowhere.

Friendship is what they agree to, but both men realize there’s just something there neither of them can deny. What will it take for them to overcome everything and realize there’s no time like the present to grab on to what they want?

After reading two titles by C.L. Mustafic, I know that I enjoy her writing style and that she’s not afraid to take risks. I really hate when authors stick to one formula just because it’s successful. A bonus for me is that I love football (soccer) and lively, picturesque European settings. So I knew I couldn’t go wrong with Calling the Ball.

Early on, Henrick receives the devastating news from his closeted lover and co-worker, Klaus, that he is getting married. Henrick is unhappy being Klaus’ secret relationship and wants more than just sex, so he decides to end it and go on a much- needed holiday to a seaside resort in Albania.

While lounging at the pool, Henrick lays eyes on none other than Valentino “Tino” Alessi, a closeted professional footballer beset by scandal. The attraction is instant and mutual, but Henrick guards his heart closely. Tino is persistent, though, and soon their flirtation leads to friendship.

This is a slow-burn romance and a light, relaxing read. I loved the alternating viewpoints, allowing the reader to get to know both characters equally. I adored Tino, despite his not being able to take no for an answer, but I found Henrick to be immature and indecisive. The constant push and pull annoyed me to no end. At times, I couldn’t understand why Tino was so attracted to Henrick. The sex, when it finally happened, was so lacking in sensuality that I could have cried.

For a story about a pro footballer, there were precious few sport details. And there were frequent occurrences of “the man”, “the other man”, “the smaller man” which I found annoying and distracting.

It’s a good story overall, just not a great one.
Posted by Nancy at 7:34 PM No comments: