Blood From a Stoner 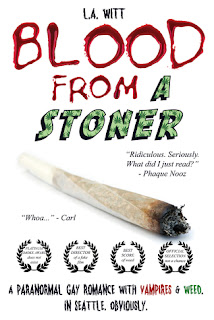 L.A. Witt
Self-Published
Reviewed by Nancy
4 out of 5 stars

Greg Dawson’s not sure which he regrets more—becoming a vampire or becoming a software engineer. Immortality? Not all it’s cracked up to be. The job? Way more headache than it’s worth, especially on those increasingly frequent nights when he’s overworked and hangry. With a deadline looming and his hunger growing, he’s nearing the end of his tether. Then relief comes from an unexpected source—Zane Webber, the hot programmer Greg’s been fantasizing about for two years.

Disregarding company policy, Zane lets him feed, but kind of forgets to mention he’s got some weed in his system. The next thing Greg knows, he’s high as a kite… and he likes it. He wants more. Except how much of that high is secondhand weed, and how much is the electric and undeniable chemistry between him and Zane?

That chemistry draws them back to each other again and again, and suddenly their downtime is full of sex, smoke, feeding… and emotions. The only problem is that Zane’s a mortal. If they’re in this for the long haul, then Greg has to either turn Zane or accept a future of watching him wither and die. Greg doesn’t want to lose Zane, but he also can’t stomach condemning him to this “life.”

And if they can’t find some middle ground, they’ll have no choice but to let their love go up in smoke.

Everyone knows the pluses and minuses of vampire unlife. You can live forever if you’re careful to stay out of the sun. You never have to worry about the problems associated with aging. Your senses are sharper. On the downside, life can become very lonely when family members, friends and lovers die. The only thing vampires can feed on and digest is blood, so no going out with friends to try that new neighborhood bistro.

In Greg’s and Zane’s world, vampires live alongside humans, so they must do what society expects of them, like work and pay taxes. While companies are required to make reasonable provisions to accommodate vampire sleep patterns, they can certainly be exploited in other ways.

“Staring at the warm lights from distant offices, I wonder if the occupants are as frustrated as I am. If they’ve fed recently. If someone told their bosses that vampires only need to feed about once a week – even less if we get a nibble here or there – and if that made their companies decide they don’t actually need to take lunch every day. If I ever find out who told that to the powers that be at TekNorth, not to mention the legislators who exempted us from the mandatory break laws, they’re going to have a very disgruntled and hangry vampire on their hands.”


Greg Dawson is unhappy with the grueling hours and frenetic pace of his work as a software engineer. The one bright spot of his job is the programmer he’s been crushing on for two years.

Zane Webber has a thing for fangs. He also enjoys his weed. Even though marijuana is legal in Seattle and TekNorth turns a blind eye to its use as long as it doesn’t impact performance, feeding coworkers is against company policy. Nevertheless, Zane offers himself to a tired and hungry Greg.

This is a funny, sweet, and steamy story. I loved how Greg’s and Zane’s relationship progressed from feeding, getting high and sexy times to something much deeper. While the story was told from Greg’s perspective, the author did a great job conveying Zane’s emotions and feelings. I very much enjoyed their highs and lows.

A perfect story to cuddle up with on a cold winter night.
Posted by Nancy at 8:37 PM No comments: