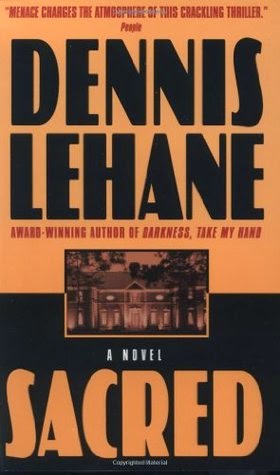 Sacred
HarperTorch
Reviewed by: Nancy
4 out of 5 stars

Dennis Lehane won a Shamus Award for A Drink Before the War, his first book about working-class Boston detectives Patrick Kenzie and Angie Gennaro. His second in the series, Darkness, Take My Hand, got the kind of high octane reviews that careers are made of. Now Lehane not only survives the dreaded third-book curse, he beats it to death with a stick.Sacred is a dark and dangerous updating of Raymond Chandler's The Big Sleep, as dying billionaire Trevor Stone hires Kenzie and Gennaro to find his daughter, Desiree. Patrick's mentor, a wonderfully devious detective named Jay Becker, has already disappeared in St. Petersburg, Florida, while working the case, so the two head there to pick up a trail. Desiree, of course, is nothing like the sweet and simple beauty described by her father, and even Chandler would have been amazed by the plot twists that Lehane manages to keep coming.

In the third book of the Kenzie/Gennaro series, Patrick and Angie are hired to find a dying billionaire’s missing daughter. They learn that the detective he previously hired and who trained Patrick, has also disappeared under mysterious circumstances.

There are lots of twists and turns in this case, a grieving daughter, people who are not what they appear to be, a cult that exploits the grief and vulnerabilities of its recruits, a family who behaves badly, and a lot of missing money.

I was beginning to tire of the dreary and gray streets of Boston and was thrilled that the trail eventually led the intrepid detectives to hot and sunny Florida. Patrick and Angie are still recovering from their pain and losses from the previous two novels and have an opportunity to explore the friendship, love and tenderness that is growing between them.

While this story lacked the intensity and pace of the first two books, it was still very satisfying.

Also posted at Goodreads.
Posted by Nancy at 4:25 PM No comments: