WEST WITH THE NIGHT BY BERYL MARKHAM

West with the Night by Beryl Markham
My rating: 5 of 5 stars

”Being alone in an aeroplane for even a short a time as a night and a day, irrevocably alone, with nothing to observe but your instruments and your own hands in semi-darkness, nothing to contemplate but the size of your small courage, nothing to wonder about but the beliefs, the faces, and the hopes rooted in your mind---such an experience can be as startling as the first awareness of a stranger walking by your side at night. You are the stranger.” 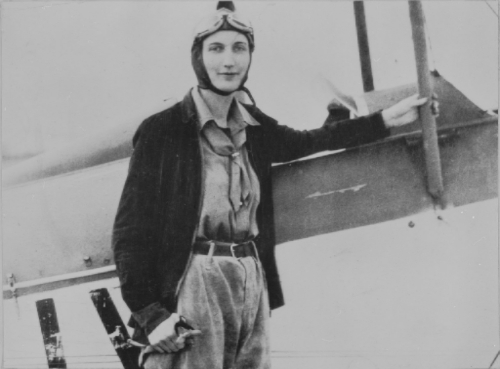 Beryl Markham was the first woman to fly solo over the Atlantic, going East to West. She made it to the coast of Nova Scotia by the skin of her teeth. Ice had clogged the air intake to her last fuel tank, greatly reducing the amount of fuel getting to the carburetor. The Vega Gull’s engine kept dying. She kept nursing it back to life until finally the coast appears. She crash landed without killing herself and put herself in the record books.

She grew up in Kenya and always wanted to do what the boys were doing. She had a native boy who was a close friend. This association allowed her to learn the ways of the tribe. She has to be one of the few white girls from that period of time or any period of time who was allowed to go on hunts with the men.

”So there are many Africas. There are as many Africas as there are books about Africa--and as many books about it as you could read in a leisurely lifetime. Whoever writes a new one can afford a certain complacency in the knowledge that his is a new picture agreeing with no one else’s, but likely to be haughtily disagreed with by all those who believe in some other Africa.”

There are a lot of factors in how people experience a place. As travellers, it might rain the whole time you are somewhere, or you might have one rude experience with a waiter (Paris and I should have knocked the bastard on his doughy fat ass), or you might be experiencing the final days of a doomed love affair. On the other hand, the weather might be sunny and breezy, or you might have an amazing hour with a knowledgeable art curator, or you might find new love. All of those factors can certainly color our perceptions of a place. When you live anywhere for an extended period of time, like Beryl did in Kenya, you have a better chance of experiencing a true Kenya.

But then there is a difference growing up an English privileged rose who has horses and all that her heart desires compared to say a young black Kenyan woman who might have a completely different experience growing up in Africa. Beryl made one generalization about a local tribe that smacked of the imperial colonial view of a local population.

"But physically the Kikuyu are the least impressive of all. It may be because they are primarily agriculturists and generations of looking to the earth for the livelihood have dulled what fire there might once have been in their eyes and what will to excel might have been in their hearts. They have lost inspiration for beauty. They are a hardworking people from the viewpoint of Empire, a docile and therefore a useful people. Their character is constant, even strong, but it is lustreless. "

I have a friend who happens to be a Kenyan from the Kikuyu tribe. I shared this quote with her, and she had a few opinions about the description

”The wench!! (that was my favorite) yet another ignorant white-privileged bourgeois colonial story which paints a pretty picture of the land but knows next to jack shit about the locals. Only what they saw in passing. I would gladly tell the dead colonial to stick to horses and planes. But really? We lost our spark because of the earth? We killed for that land. We shed blood and tears for it. Most of it white... And we continue to struggle for it. To buy our own to raise our children on. And what did she mean lost our spark? We don't have diamond eyes. Or wear contacts. Or have eyes that shine like the ocean blue eyes of a Victorian damsel who wouldn’t know dust if it drowned them... See? And my thoughts are a lot less polite.” Mwanamali Mari

Yes, I know I’m a pot stirrer. I probably missed my calling as a journalist. Of course, all of us know that, when we make a generalized statement about a culture or a people, we leave ourselves susceptible to criticism. The point is during this period of time, in the pre-world war two era especially, books are rife with irritatingly simplistic, condescending statements about native population. This was the only one I caught. Mwanamali, reading this book, might catch even more than the one that I did, but in her defense, Beryl did love many native Kenyans that she met and worked with over the decades of her life. 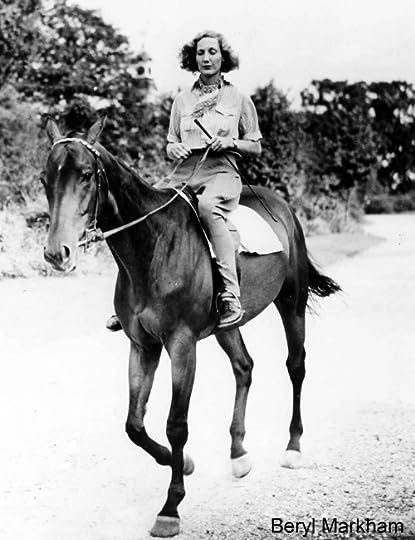 Her father experienced some financial difficulties due to a lack of rain...something, being the son of a farmer, that I’m very familiar with. Beryl, as a teenager, became a horse trainer and did well. It was a boy’s club, of course, so it took longer than it should for her to get the business she deserved, but then Beryl was not unfamiliar with being at a disadvantage from the moment she came out of the womb...a girl. There was this great moment in the book where a filly called Wise Child, that Beryl had resurrected from the dead, races against the top stallion in the racing world at the time. She did such a great job setting the scene and then describing the race that I felt like I was as invested in the outcome of that race as Beryl. I had tears in my eyes.

Markham is a lyrical writer whether she is describing horses, planes, landscape or even the process of writing. ”Silence is never so impenetrable as when the whisper of steel on paper strives to pierce it. I sit in a labyrinth of solitude jabbing at its bulwarks with the point of a pen--jabbing, jabbing.”

I did have a moment of real doubt when Beryl took a job flying big game hunters into the wilds of Kenya to shoot elephants. The money was really good, but there is something soulless about shooting elephants. She even said, ”It is absurd for a man to kill an elephant. It is not brutal, it is not heroic, and certainly it is not easy; it is just one of the preposterous things that men do.” You may not pull the trigger, but if you are helping these hunters find their prey via an airplane, you are as responsible for the death of the elephant as the men who fire the bullet. She had some wonderful, inspiring descriptions of how smart the elephants were and how many times they would fool the hunters. Those stories confirmed me in my belief that elephants are intelligent sacred animals and should be left in peace. So why do some people feel so driven to hunt these beautiful animals or put themselves in other death defying situations? One of the Kenyan guides remarked to Markham: ”White men pay for danger--we poor cannot afford it.”

It kind of makes it all sound fake. Men trying to prove themselves in manufactured situations.

I did have some issues with Beryl, but I also found her to be a groundbreaker and certainly a woman whom other women can look up to. She took on men toe to toe and proved she could compete with them whether it be on the horse track, in the air, or in the bedroom. She was friends with Karen Blixen, better known by her pen name of Isak Dinesen. She was such good friends with her that she even shared a man with her by the name of Denys Finch Hatton, an adventurer and hunter. The interesting thing about this book is that her love life has been carefully kept off screen. Markham was notorious for her marriages and her affairs. She was attractive to men, and she was attracted to men. Her love life fits with the way she lived her whole life as free as any man and more so than most. 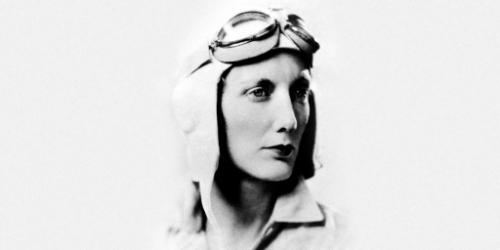 Straight on till morning

”No map I have flown by has ever been lost or thrown away; I have a trunk containing continents.” The world was hers.

Posted by JEFFREYKEETEN at 11:08 AM No comments: