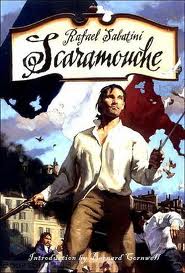 
I wavered between four and five stars on this one, but I totally have to go with the five. It’s just that awesome. I was actually a little surprised at how much I loved this book. I mean, I love swashbucklers and historical fiction…Dumas père is my man, but the only other Sabatini novel I’ve read, _Venetian Masque_, I found to be a little underwhelming so I did not expect this from Sabatini. Speaking of Dumas, I almost think that _Scaramouche_ can be placed in the same company as that master’s great work _The Count of Monte Cristo_, no small praise from me. It doesn’t quite have the same level of intricate plotting as the latter, and I will never give pride of place to any but Monsieur le Comte, but it is still an awesome read filled with exciting ups and downs as we follow the trials and triumphs of the title character aka Andre-Louis Moreau. I actually noticed that Moreau shared some similarities with Dantès as a character, at least in the fact that both of them seemed to have a Batman-like ability to adopt nearly any skill they required to further their own ends. For Moreau this leads him to start out as a lawyer with exceptional reasoning and speaking skills, become a brilliant actor, stage writer and theatre impresario, then move on to master the art of the sword and become a maître d'armes, and finally to enter the realm of politics all within a span of two years.  That’s ok, I don’t mind it if my heroes are super and Moreau pairs his ability with an acerbic wit and keen insight I found both refreshing and awesome.

I have to add here that I ‘read’ this as an audiobook downloaded from Librivox. Now the narrators from Librivox, given that it is a free site, can be…how to put this delicately? Crappy. Not so this one. The narrator Gordon Mackenzie was fantastic. He had just the right pacing, didn’t stumble on his words (you’d think that would be a prerequisite for narrating an audio book, wouldn’t you?), and was able to voice each character differently without sounding completely ludicrous. He even managed the French phrases and Latin epigrams with no apparent effort. Excellent job Mr. Mackenzie! I really think his work on this added to my already superlative enjoyment of the text itself.

Given that this is a classic I imagine that many already know the plot, at least in broad strokes: Andre-Louis Moreau is a bastard of no name, taken in as the “godson” of the local seigneur of the village of Gavrillac (amidst the knowing glances and whispers of the locals). He is a young man of intelligence and wit, known primarily for his acerbic tongue and incisive reasoning, who acts as the legal representative of his godfather, M. de Kercadiou. His best friend, Philippe de Vilmorin, is a young seminarian who also happens to have revolutionary political leanings. When a local peasant is summarily killed by a local noble, the Marquis de la Tour d'Azyr, Philippe tries to convince the nobleman to recompense the dead man’s family for the deed. Incensed, and sensing in the eloquent young man one who could stir the mounting discontent of the people that is beginning to raise its head in France, d’Azyr decides he must get rid of this possible thorn in the side of his class. An expert fencer, perhaps the best in France, d’Azyr forces the fledgling Philippe into challenging him to a duel and handily dispatches the young man, whose own abilities with the sword are non-existent. It is this act of bald-faced murder (and the subsequent inability of the young lawyer to gain any justice from the established powers) that sends young Bruce Wayne, er Andre-Louis, on his road of vengeance against the man, and the class, that killed his friend in cold blood.

As we follow Andre-Louis in his quest we see him taking up the mantle left by his dead friend and using his own eloquence to stir up the crowds against their unjust masters. Forced into hiding when his name and actions become know, Moreau manages to join a travelling band of actors who mount plays based on the fading style of the Commedia dell'Arte and, after establishing himself as not only an excellent actor and writer, but even a company manager of some skill Moreau takes on the role of Scaramouche (one that is uniquely suited to his outlook and abilities) and proceeds to lead the troupe to the verge of fame and fortune. Along the way he falls in love and ultimately finds himself once again crossing paths with his avowed enemy, seemingly driven by the hand of fate. Moreau encounters numerous dangers and escapes in his years of hiding which I won’t recount here…read the book and enjoy them to the full yourself! Suffice it to say that the nascent revolution turns the tables and thrusts Andre-Louis into a position of power. It is a position that is not so easily taken advantage of, despite Andre-Louis’ apparent single-mindedness in regards to his quest, and the conclusion of the tale is satisfying and much more complex than one might be given to expect from a work in this genre.

I thought Sabatini’s prose was great. His turns of phrase, especially in the mouth of Moreau, were sublime and the text is littered with an abundance of bon mots. His characters also shine and often manage to attain a level of complexity that goes beyond the one dimensional duality of good-guy/bad-guy one might expect. While I was always cheering for Moreau and loved his character, he is not always an eminently likeable guy and even the sneering and vain arch-rival the Marquis de la Tour d'Azyr manages to show himself to be something more complex than a mustachio-twirling villain. Bottom line: this book was great. I don’t know why I took so long to read it, but I’m very glad I finally did. I’ll be revisiting this one many times in the future.

Also posted at Goodreads
Posted by Terry at 1:20 PM No comments:

The last man of honour


This is my favourite of Perez-Reverte's books that I've read thus far. The stoic fencing maestro Jaime Astarloa is living out his remaining days of quiet desperation with a philosophical stiff upper lip as he watches the way of life he has devoted himself to fade into unlamented obscurity. Don Jaime spends his days teaching bratty aristocrats the art of the sword, an art they appear to no longer need or care about, and marking time with his few acquaintances in the Cafe Progresso; a sad group of older men watching their decline in disbelief, each a victim of their own inability to make anything meaningful of their lives.

Into this quiet decline comes the unexpected appearance of a beautiful and mysterious woman, Adela de Otero, a veritable whirlwind of transformation whose request to learn from him the deadly "two hundred escudo thrust" plunges the hapless fencing master into a world of danger and intrigue quite at variance with his expectations for his sunset years, though not, perhaps, wholly against his secret wishes.

The political turmoil and colour of 19th century Madrid is brought to vivid life by Perez-Reverte and Don Jaime's position as a virtual outsider within his own society make him an excellent viewpoint character for the reader. The poignant decline of Don Jaime, along with his perseverence despite the obstacles put before him, make him sympathetic despite his relatively cool nature. I really enjoyed reading this book and come back to it often to simply soak in the atmosphere so effectively created by Perez-Reverte.

April 2012 re-read: Still love it. Don Jaime is a great character and Adela de Otero is almost worthy to be classed with Milady de Winter. Awesome sense of time and place as well and all wrapped up in a fairly unconventional swashbuckler.

Also posted at Goodreads
Posted by Terry at 1:03 PM No comments: