THE REEF BY EDITH WHARTON

The Reef by Edith Wharton
My rating: 4 of 5 stars

”In every nerve and vein she was conscious of that equipoise of bliss which the fearful human heart scarce dares acknowledge. She was not used to strong or full emotions; but she had always known that she should not be afraid of them. She was not afraid now; but she felt a deep inward stillness.” No one was more surprised than George Darrow when the girl he was wooing married Fraser Leath. He may have dallied a bit. He may have flirted with other girls a bit too much, but the intent was always that Anna was to be his bride. Leath sent her a flurry of presents, which certainly helped his cause, but the underlying concern for Anna was whether she could ever really trust George Darrow.

He was a smooth talker, a convincing man. He was elegant, intellectual, and attentive. A man who could stay calm in the face of the most piercing accusations.

As a contrast, Fraser Leath had more of a relationship with his collection of snuff boxes than he did with his wife. He was a man of means, but too unimaginative to really know how best to use his money. He may have actually died of boredom.

Anna and George kept in touch by writing occasional letters to one another. Yes, before Facebook people actually communicated with each other with more than just pithy comments, or by sharing pictures of their cats, or by sending a nudge, though I can’t help but see some parallels with Facebook in the sense that George and Anna were old flames finding each other once again.

Hooking up with an old girlfriend via Facebook has about the same appeal for me as swallowing a gallon of gasoline and throwing a match down my throat.

Maybe things will work out for George and Anna... or maybe not.

Edith Wharton is mischievously cunning and, of course, throws one more twist into the champagne. Her name is Sophy Viner.

So much of life is about timing. Anna wanted George to visit, but after he has left London and arrived in Paris, a telegram caught up with George to wait until later in the month to visit. He suspected cold feet and felt the frigid draft of rejection start to feather his neck.

After all Anna escaped him once before.

George was in a strange frame of mind. He was caught between negative suppositions and yet stirred by the heady first sips of an altered future. With Anna, he had started to see himself differently. ”Everything in him that egotistically craved for rest, stability, a comfortably organized middle-age, all the home-building instincts of the man who has sufficiently wooed and wandered….” At this very moment, when he questioned the dreams he had sketched on the canvas of his mind, he met Sophy Viner. She was between jobs, short on money, lost, and incredibly young and lovely.

A gentleman must offer his assistance.

Her passion and excitement about the theatre, about the fine restaurants, and a glimpse of a different life increased his own enjoyment. She was a ”shimmer of fresh leaves.” A temptation in a time of doubt.

Sophy has a larger role to play, but you will have to read the book to find out. Anna does discover that Sophy was more than a casual acquaintance of Mr. George Darrow.

Anna and George did patch up the misunderstanding over the delay in seeing each other, but Anna was naturally distrustful, as if the impressions she had of a younger George still applied to an older George. ”She reflected with a chill of fear that she would never again know if he were speaking the truth or not.” It became clearer why she married Fraser. Could it be because he was too thick headed to ever conceive of any form of duplicity? She seemed to forget how unhappy he made her. He hardly fulfilled her.

George Darrow made her knees turn to water.

Everyone in this novel finds themselves in an impossible situation. Half truths become hidden agendas, and eventually everything becomes wrapped in tendrils of lies that even start to erode the truth. 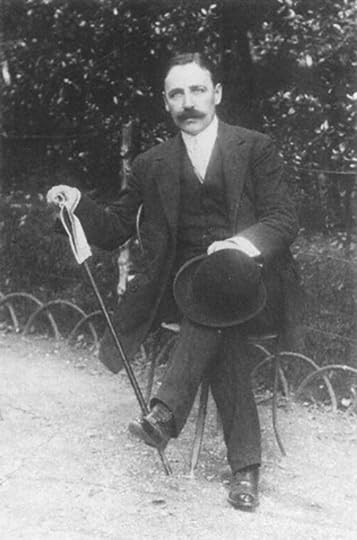 Morton Fullerton, the creature who provided a “sexual education” for Edith Wharton.”

Now Edith Wharton is projecting some of her own troubles with love onto George. I’m not sure George ever had a chance at a fair shake. Edith had an affair with a man named Morton Fullerton. He was the love of her life and an intellectually stimulating partner. Her husband suffered tragically from debilitating depression, and she had been living in an intimacy desert for many years. Unfortunately, Morton found other young women stimulating for something other than intellectual discussion.

He broke her heart.

”How could she have thought that this last moment would be the moment to speak to him, when it seemed to have gathered up into its flight all the scattered splendours of her dream?”

Henry James liked this book, referring to it as a ”triumph of method.” He was very good friends with Edith Wharton and also introduced her to Morton Fullerton. I do wonder if James, when he presented Fullerton, was trying to create a situation where he provided the means to stimulate her writing. (Yes, I’m alluded to the thought that James might have been a pimp.) Wharton should have slipped Henry James a happy pill in a tall glass of bourbon and slapped him around a little bit. He could, at the very least, have given her a better compliment than saying this novel was a ”triumph of method” (YAWN!) or maybe a heads up that Fullerton, though charming, was a slippery serpent.

I am truly sorry that Fullerton crushed her, but this novel would have been a different book, probably not a better one, if she had never met him. Tragedy and triumph are both elixirs to a writer. I hope the experience of writing was cathartic for her though I’m sure she restrained herself. ”...and the things she really wanted to say choked in her throat and burned the palms of her hands.”

I always wonder, after finishing a Wharton book, why it takes me so long to read the next one. Her books are always a pleasure, even when they break your heart.

Posted by JEFFREYKEETEN at 10:09 AM No comments: