There's Nothing Wrong With a Little Trouble 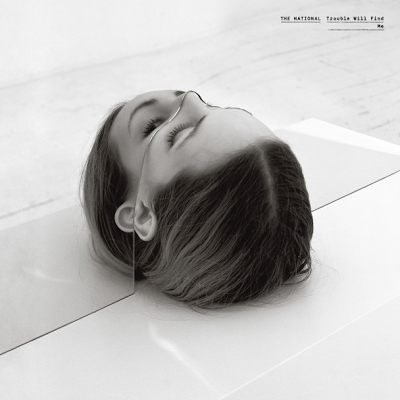 Trouble Will Find Me

Melancholy is a word that has become synonymous with the indie rock sound of The National, but there are some surprises on their sixth studio album Trouble Will Find Me.  Don’t worry—for those who love the band’s trademark brooding nature, there’s still plenty of the outsider’s angst and alienation (Humiliation), the introvert’s painful interactions with a world he doesn’t understand how to be in  (Demons), addictive relationships that seem based more on the identification with another fragmented, damaged individual than on romantic longing (This is the Last Time).  However, the pervading darkness of previous albums seems to have given away (ever so slightly, mind) to, dare I say, the tiniest, faintest, is-it-really-there sliver of optimism?


The cover image of Trouble Will Find Me features a female face bisected with a mirror, so that one half appears to be asleep while the other half is disconcertingly awake.  This duality of awareness and unconsciousness frames the album’s lyrical content, which often juxtaposes a cautious hope and weary resignation.  Lead singer Matt Berninger writes song lyrics that reject predictable patterns—opting for a word that doesn’t quite rhyme when a more clichéd one will do, or squeezing in more syllables than the music’s rhythm seems willing to allow because he has so much more to say.  The result creates complex surprises for listeners who have become jaded to the predictability of shallow pop lyrics.  His eccentric turns of phrase often focus on the mundane, refusing to idealize life in overwrought, poetic language because life itself in its barest, most raw form is poetry.  In The National’s distinct sound, it is Berninger’s resonant and haunting baritone and the band’s orchestral layers that bring eloquence and emotional weight to these everyday fears and neuroses.


Unlike previous albums, there is an unexpected buoyancy to the music, if not always to the lyrics.  In Sea of Love, Berninger fears the prospect of succumbing to love, despite watching others willingly surrender  (“I see people on the floor.  They slide into the sea . . . I see you rushing down [don’t drag me in]”).  His words worry that “If I stay here, trouble will find me,” but the upbeat tempo suggests that trouble may be just what he needs; perhaps it will take “trouble” to upset the routine and force him to live outside of himself.  Don’t Swallow the Cap reveals a speaker who recognizes “I have only two emotions, careful fear and dead devotion.  I can’t get the balance right.”  This divergence is further emphasized by Berninger singing in the upper registers of his vocal range, layered over his own mumbling, more familiar bass.  The result is a pleasing rasp that suggests he’s closer to finding the balance than he might think.


For the purists, there are still several more traditionally National tracks.  In Demons, an awkward Berninger resigns himself to an inability to maintain an optimistic outlook (“Every day I start so great and then the sunlight dims . . . When I walk into a room I do not light it up.  Fuck.”).  In This is the Last Time, the “sea of love” has become a swamp, sucking him under and yet “You’re the only thing I want.”  Repeatedly chanting “this is the last time” as a mantra, he seems to be trying to convince himself (and us) that he will eventually leave, though he knows the cyclical nature of the relationship will drag him down again.  In the achingly reflective Slipped, he is routinely drawn back to the place (emotional and physical) where a relationship fell apart, acknowledging his culpability as “I’ll never be anything you ever want me to be."


In terms of sound, Trouble Will Find Me has more in common with Alligator and Boxer than 2010’s High Violet, which featured a darker rock sound.  While I enjoyed the 2010 effort, this return to a more stripped down, poignant album is a reminder of why I fell in love with The National in the first place, and yet there’s enough difference here to hint at the promise of all that is to come.
Posted by Amanda at 8:00 AM