THE DEVIL IN THE KITCHEN BY MARCO PIERRE WHITE

The Devil in the Kitchen: Sex, Pain, Madness and the Making of a Great Chef by Marco Pierre White
My rating: 4 of 5 stars

”And so I took my first step along the long, bully-laden, work obsessed, sleep-deprived, nicotine- and caffeine-fueled, passionate, hot and winding road that would end with three Michelin stars.” 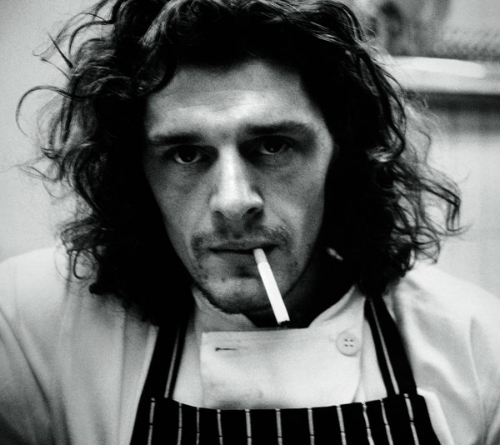 I don’t cook, but oddly enough I enjoy reading about chefs and the skillet laden road they travel to create food that makes their customers close their eyes and raise their hands to the food gods in supplication.

It is really all Anthony Bourdain’s fault. I read Kitchen Confidential after catching his show on the Travel Channel. I enjoyed his humor on the show and hoped that his amusing commentary would show up in the book. Reading the book was just like how I would expect a conversation to go with Bourdain. He was hilariously irreverent about everything. He certainly convinced me that cutting edge chefs had a lot in common with the dissenting, maverick attitudes of the gunslingers of the Old West. Only pistols at noon are exchanged for frying pans.

”From the moment my chef pals and I got a look at Marco Pierre White’s first cookbook--and at photos of the Man Himself, in all his haggard, debauched-looking, obsessively driven glory---we dreamed of nothing more than to be just like him. He made history.”
-- Anthony Bourdain

To say that White is driven is an understatement. His desire to be the best chef in not only Britain but in the world completely dominated his life from the time he became conscious in the morning until the time he passed out at night. He wanted three Michelin stars more than he wanted to be rich or famous. He blew up his marriages. He threw condiments at his staff. He called them demeaning names. He tortured them. It was impossible for anyone to match his expectations for himself. ”In the kitchen, the first three weeks was the toughest period for the new boys. By the end of it they were usually fucked, having lost a stone in weight, gained a dazed expression and cried themselves dry. That was when the shaking started---and when many of them left. One day they were there, the next they were gone. If they could make it into the fourth week, they were doing well.” 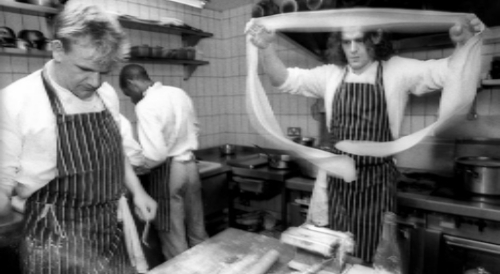 You might recognize Gordon Ramsay, who worked for the temperamental White for almost three years before having enough of the tirades.

THE Mario Batali or as he was known in White’s kitchen Rusty Bollocks is one of those guys who worked for him. He was an especially favorite target for White because he was fat and nice. So you would think, now that Batali is one of the most famous chefs in the world, that he might want to skewer White for some of that rough treatment. Let’s check in and see what Batali says about him: “Marco is a gift to humanity, with more passion per pound than anyone else I have ever met. His story is genius, his voice his own….Marco is still my hero.”

He does become the youngest chef to ever win three Michelin stars, but each star is stained with the sweat, blood, and tears of anyone who ever labored for him. White worked for every great chef in Britain to learn as much as he could from them and then apply his own particular twist to their own greatness. He too was tortured by the system the same way he tortured his own staff, and like with the food, he put his own particular twist on that as well. He was on top of the world, untouchable. He had women slipping up to his private office for a quickie while their husbands waited patiently in the dining room for them to return from the “bathroom.” He threw diners out of his restaurant if they complained. If someone could not understand what he was all about, he did not have time for them. 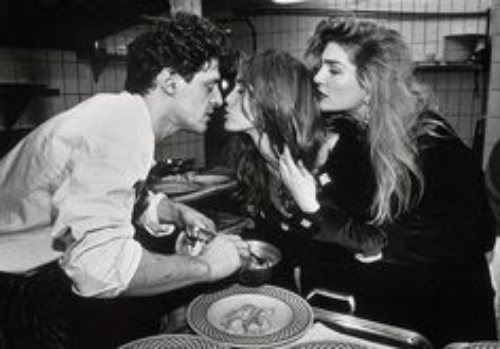 Women were waiting in line to see The Devil in the Kitchen.

White does mix in some tips on cooking that are more about seeing food differently. Seeing an egg for more than just an egg: ”Cook’s brain. It’s the ability to visualize the food on the plate, as a picture in the mind, and then work backward.”

”For instance, let’s just think for a moment about a fried egg. It’s not the most inspired dish, but then again, if you can’t cook an egg, what can you cook? And actually, a perfectly cooked fried egg is quite beautiful.”

I’m an eggoholic, so I was visualizing the clouds parting, and a ray of sunshine beaming down to turn the yolk to a yellow flame.

It really comes down to the fact that Marco Pierre White may not have been the easiest man to like, but many of the people who worked for him loved him. The tree of successful Chefs who learned from him and passed his knowledge onto another generation of chefs is wide and deep with numerous branches that can be found in just about any high-end restaurant in the world. He is still to this day the youngest chef to EVER win three Michelin stars. He was the grandson of a chef, the son of a chef, and his brothers were chefs, so the stove was his cradle. Sauces were his milk. He made music with skillets and ladles. He became the Mick Jagger of the kitchen.

If you wish to see more of my most recent book and movie reviews, visit http://www.jeffreykeeten.com
I also have a Facebook blogger page at:https://www.facebook.com/JeffreyKeeten
You can also find terrific reviews at:http://www.shelfinflicted.com/

Posted by JEFFREYKEETEN at 11:00 AM No comments: