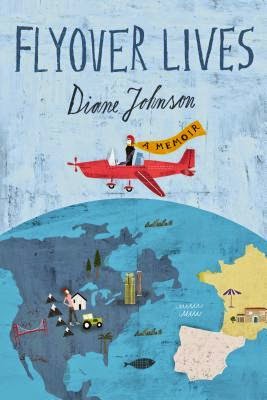 Flyover Lives by Diane Johnson
2014
Reviewed by Diane K.M.
My rating: 3.5 stars rounded up to 4


This was a charming memoir, even though it rambled in parts. But even the rambling parts were rather interesting.

Diane Johnson grew up in Moline, Illinois, which is part of the Midwest, which has been derisively called "flyover country" by those who live in big cities on the coasts. I was keen to read this book because I grew up in Iowa, which is next door to Illinois, and indeed, many of Diane's stories were similar to my experiences there, even though there is a 40-year difference in our ages. Much of the Midwest is not very changeable, you see.

"I had always wondered how the first settlers in Illinois, in the eighteenth century and the beginning of the nineteenth, survived the ruthless climate and isolation, how they managed to clear the tough woodlands to make their farms, how they taught their kids something about Shakespeare and Mozart, and eventually pitched in for a war like the Civil War though they'd barely seen a black person or encountered a slave. No one writes much about the center part of our country, sometimes called the Flyover, or about the modest pioneers who cleared and peopled this region. Yet their midwestern stories tell us a lot about American history. Migration patterns, wars, the larger movements, are after all made up of individual human beings experiencing and sometimes recording their lives."

Diane was one of those restless kids who dreamed of traveling and moving away from her small town, and eventually she did. At the beginning of the book she is living in France, and while at a house party, a French friend tells her that "Americans are naive and indifferent to history."

This quote bothers Diane to the point where she spends months researching her ancestors, going through family heirlooms and diaries, and ends up writing a book about them. (So take that, you obnoxious woman!)

"I became especially interested in some testimonies by long-departed great-grandmothers, simple stories but all the rarer because the lives of prairie women have usually been lost. Perhaps prairie women at the end of the eighteenth century didn't have the leisure to pick up their pens, or maybe they didn't think their lives were of interest."

Most of the history Diane dug up involves her great-great-great grandmother Catharine Martin (born in 1800), who took time to write a hundred pages about her life when she was in her 70s.

The prose in Diane's memoir is lovely, and I flagged numerous passages while I was reading. My only complaint was that some of the chapters jumped around in time and perspective, which was a bit jarring. Some pieces felt like they should have been magazine articles or essays, but got shoved in this book wily-nily. For example, there is an interesting section about Diane's experiences with writing screenplays and working with movie directors, including Stanley Kubrick, Merchant Ivory and Mike Nichols, but the placement seemed random. And some of the chapters were so short that they felt like afterthoughts.

Overall, this was a very enjoyable read, and I appreciated the historical details about Midwestern life in the 1800s, and also Diane's stories about growing up in the 1940s. Before this memoir, I had only read one of Diane's novels (Le Divorce), but I liked this so much that I think I'll look up her other books.

Favorite Quote:
"As a little girl in Moline, I didn't expect to be a writer, because I didn't know a writer was something you could be; I had no sense that books were still being written."
Posted by DianeLibrarian at 6:00 AM No comments:

The Getaway Car: A Donald Westlake Nonfiction Miscellany by Donald E. Westlake
My rating: 3 of 5 stars

The Getaway Car is a collection of Donald Westlake's nonfiction work.

I arrived really late to the Westlake party. In fact, when he died, I think I'd only read a handful of his books. Since then, however, I've probably read 25-30 more and thus I was interested in this collection.

The Getaway Car offers up letters, introductions, and essays Donald Westlake wrote during his lifetime. He covers a wide range of topics, like how he wasn't able to support himself writing science fiction in a scathing letter to Xero, a sf fanzine, to his trials and tribulations involving Hollywood. Along the way, he covers such diverse subjects as Lawrence Block, Rex Stout, Peter Rabe, and his wife's tuna casserole recipe.

I liked this book as it shows Westlake was a clever guy no matter what he was writing. There wasn't a lot of meat to it, however. It was kind of thin and some of the selections seemed included to pad the page count.

That being said, I did enjoy a lot of it. It makes me want to read more Peter Rabe, for instance. It also drives home the point of how unknown and unappreciated Westlake was by the general public. With 90 novels under his belt, he was the James Patterson of his era, with the added bonus of actually being a good writer.

Three out of five stars. Maybe 2015 will be the year of the great Parker re-read.

In the Woods by Tana French
My rating: 4 of 5 stars

When a twelve year old girl is found murdered at an archaeological dig, Detective Ryan and Maddox are on the case. But what does this case have to do with a similar case twenty years earlier, a case that saw an adolescent Ryan as the only survivor?

As a veteran of detective fiction, riddles, and brain teasers, I'm a big fan of mysteries that keep me guessing. In the Woods was one of those sorts of mysteries.

In the Woods is the story of two detectives looking for answers, both on the case they're working and inside themselves. Rob Ryan and Cassie Maddox are partners and best friends on the Dublin Murder Squad, detectives who catch all the murders that come down the pipe. When Katy Devlin is found murdered and sexually assaulted, they find themselves in the soup pretty quickly. Complicating things is the fact that Rob Ryan used to be Adam Ryan, a lad whose friends disappeared one afternoon, their bodies never found.

In the Woods is very well written and it could be read as simply a police procedural, and it would have been a very good one. The thing that sets it apart from most run of the mill books of this type are the main characters. Rob and Cassie are very well written, real to the point that I wanted to shout at them a few times. Even though it took place in Dublin, it kind of reminded me of The Wire in that there was no happily ever after ending and no action. It was all gritty police work and even grittier interpersonal stuff.

The mystery itself was solveable. Hell, the clues were even pointed out but I was too busy getting misdirected by French's skills. When the truth behind Katy's death was revealed, it was even more chilling than I'd imagined.

French really saw me coming when the Ryan-Maddox relationship took a turn. I wanted them to get together and have detective babies, not have their world come crashing down! Why do you have to be so mean, French? Why?