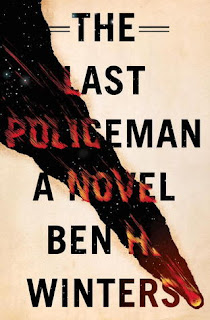 Reviewed by Kemper
3 out of 5 world destroying stars

I learned that little parable from Young Guns 2, and I kept thinking about it while reading this. It seems like you’d want to be the kind of person who would finish the game, but what if that meant everyone else has to keep going too so that they get stuck spending their last moments playing cards? Then that guy is kind of an asshole, and that’s the way I felt about Detective Hank Palace.

A giant asteroid named Maya is going to hit the Earth in about six months, and no one will survive either the initial impact or the global after effects. Law and order still prevail, but the cracks are starting to show as cell phone networks are getting spotty and the Internet is failing. One of the biggest problems is that many people have ‘gone bucket list’ and are walking away from jobs to live out their dreams.

Hank Palace benefits from this because the numerous openings in the police department of Concord New Hampshire get him moved from a patrol officer with a year’s experience to detective which is what he’s always wanted to be. Unfortunately for him, the other cops in his squad have mentally checked out and most of the police work consists of cutting down the people who have hung themselves. When Hank is working what looks like another routine case of suicide in a fast food joint's restroom, he sees some oddities that make him think it’s a homicide, but no one except him seems to care.

This is a helluva an intriguing concept. I particularly liked how the fabric of society is portrayed as starting to fray at the edges. Most people who are working are doing so only because they need money to live until Maya hits so motivations levels are pretty low. One especially clever touch is that the US government has enacted emergency laws that allows citizens to be jailed without trial for minor offenses, and this means that getting arrested is essentially a death sentence since you’ll be held in a cell until the big boom. So while there is some black market stuff going on, the criminals are terrified of getting caught, and this has kept a lid on illegal activity.

The thing that dragged this story down for me was the character of Hank. He’s an earnest rule abider and eager young detective at a point where the rules don’t matter much and nobody really wants to investigate anything. He’s determined to finish the game, and that should make him admirable. The problem is that Hank’s dream was always to be a detective which means that he is living out his personal bucket list instead of seeming noble by carrying on with his duty. It’s also his way of avoiding dealing with the impending doom, and he never sees the irony when he repeatedly says, “A man is dead.” as a justification for his insistence on pushing the investigation when no one else cares.

And I gotta say, I’m kind of on the side of the other people in this book. Hank doesn’t seem to care what kind of impact his investigation has on anyone else. When he demands an autopsy, the coroner coldly tells him that she’s missing her daughter’s music recital to do it, and ask him if he knows how many more recitals she’ll get to see. But Hank doesn’t care. A man is dead slightly ahead of the rest of the human race, and he’s determined to find out who did it even if he wastes the precious time of other people. To me, the cost was too high.

This could have been interesting if Hank was played up as more of an obsessive jerk, and while there are a few moments like that, it still feels like the author was trying to say that Hank is the hero while everyone else is letting a little thing like the coming apocalypse turn them into a bunch of slackers

This was a great concept with an interesting angle on an end of the world story, but my dislike of the main character soured me quite a bit. I’m on the fence as to whether I’ll read the rest of the trilogy.
Posted by Kemper at 6:34 PM 6 comments: 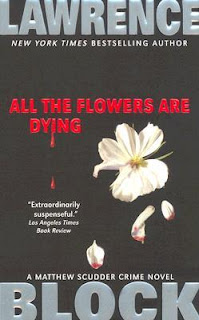 This, the sixteenth Matthew Scudder novel, opens as a psychologist comes to a Virginia prison to visit a man condemned to death for the brutal murders of three young boys. Although the evidence against him was overwhelming, the prisoner continues to protest his innocence. The psychologist claims to believe in the man's innocence, and he's the only one who does. The two men develop something of a relationship over the course of several visits and, at the end, the condemned man asks his new friend to witness his execution.

Meanwhile, up in New York City, P.I. Matthew Scudder is now in his middle sixties and in semi-retirement. He's given up the license he briefly held and no longer actively solicits business. But he will take the occasional client if one seeks him out. After all, no one in his or her right mind could imagine Matthew Scudder living in Florida, playing golf and lining up for the 4:30 p.m. early bird buffet.

A woman pays Matt $500.00 for what seems like a fairly simple task. She's dating a new man. She likes him, but he's a bit on the mysterious side. For example, they always go to her place and she's never been to his. She's worried that the guy might be a serial killer or--even worse--married, and she wants Matt to check him out.

Matt takes the case and he and his sidekick, T.J., immediately run into a brick wall. The guy has a fairly common name, and they can't get a whiff of him. They attempt to tail him one night after he leaves the client's apartment, but the guy gives them the slip.

Meanwhile, the psychiatrist from Virginia has evaporated into thin air and bad things begin to happen to unsuspecting people in New York. Matt will ultimately realize that something very bizarre and extremely dangerous is afoot. Even worse, a serial killer from a previous case may have Matt and his wife, Elaine, dead in his sights.

This book continues some unfinished business from the previous Scudder novel, Hope to Die, and it's great to see Matthew Scudder back in action. Many familiar characters put in an appearance, and the book has an elegiac feel about it. Matt realizes that he's getting close to the end of the line, and after following him for nearly forty years, readers are bound to feel as unsettled about that as Matt does.

This is a very good read and, when first published, had the feel that it might be the last of the Scudder series. Happily, that turned out not to be the case, but the book that followed this one, A Drop of the Hard Stuff, is a flashback to an earlier time in Scudder's life and so it seems entirely possible that this could be Scudder's last adventure. Thus, even re-reading the book, one is torn between the temptation to devour it whole and the desire to stretch it out for as long as possible rather than let it go.

My only objection to the book is that here again, as he did in Hope to Die, Block alternates between Scudder's POV and that of the villain. After fourteen books in which the only voice was Scudder's, it's still more than a little jarring to have another one intrude, but still, I enjoyed this book immensely.
Posted by James L. Thane at 10:11 AM No comments: