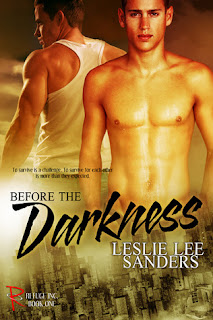 After an asteroid strikes Earth, a series of violent earthquakes destroy secluded Phoenix and leave survivor Elliot struggling to stay focused in the bleak aftermath. And then he meets fellow survivor Adam. Together, the two search for reliable shelter and other survivors while distant murky clouds fast approach. Their hunt for shelter leads them down an alternate path when they find spray painted symbols directing them to a mysterious place: Refuge Inc.

As ominous clouds slowly shut off all light to their devastated world, they are forced to come to terms with their pasts and their growing attraction for each other.

Neither thought their pasts and personal crises would affect their ability to endure the horrors they're forced to live through. Neither thought they would be drawn so close to one another in the aftermath of an unimaginable catastrophe. By working together, can they continue to survive? Or will the mystery of Refuge Inc. cause diverse expectations and lead them to decisions that further threaten their lives?

I love post-apocalyptic stories and was thrilled to get the opportunity to read this short novel about two survivors drawn together after their city and everything they knew and loved was destroyed by several massive earthquakes resulting from an asteroid that struck somewhere near the west coast.

Elliot had been walking for many hours. Exhausted, hungry and thirsty, he had no idea where he was or if anyone else survived. He eventually meets Adam, and both men are ecstatic that they are not alone. They talk a lot – mostly about the things they need to do to stay safe, about their lives before the asteroid struck, and about how scared they are. Oh, and they find time to have sex too.

I like my end of world stories fraught with danger and desperation. A little crime and violence and real struggles for survival wouldn’t hurt either. The main problem with this story is I never felt the characters were in any real danger despite the fact that the world they knew no longer exists. There was a developing romance, coming out issues, guilt, clinginess, whining and insecurity. The two main characters exhausted me at times and I often wished they would just shut up and get back to their business of surviving.

Two things kept me reading – the search for Refuge, Inc. and the injured dog, Titan. Just when the story started to get interesting and the search was over, it ended. I’m curious about how the men’s lives will change and am planning to dive into the next book.
Posted by Nancy at 6:00 AM No comments: