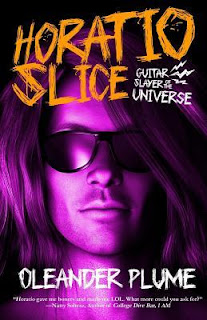 
Horatio Slice is NOT dead. Gunner Wilkes knows a secret. Heartthrob rock star Horatio Slice is not dead. Sure, Gunner may turn heads with his big brain, good looks, and gym-built body, but his mind is on one thing only: returning his all-time favorite rocker and secret fanboy crush to Earth. Yes, there are VAMPIRE PIRATES. Fame and stardom were starting to wear thin for Horatio Slice, but when he was sucked through a magical portal while on stage at Madison Square Garden into a jail cell in a strange dimension called Merona, his confusion quickly cleared upon meeting his sexy, dark-haired cellmate, a vampire pirate named Snake Vinter. Snake filled Horatio in about life in the universe, jumping from dimension to dimension, and craftily avoiding the wrath of gnarly-mask-wearing leather queen King Meridian—a guy nobody wants to cross. The metal ship is named Frances. And on Snake’s metal ship live eight identical blond Humerians, who proudly display their bodies in carefully crafted trousers, as well as a wild assortment of untamable, man-hungry travelers and stowaways. But someone has hacked into Frances’ mainframe, demanding that Snake and crew deliver Horatio Slice to King Meridian, or feel his wrath. All the zany magical comedy of Mel Brooks, an adventure not dissimilar to Indiana Jones meets Barbarella, and men, men, horny men, of all shapes and sizes, Horatio Slice, Guitar Slayer of the Universe is wild, fun, pornographic fiction for anyone who loves the masculine, the feminine, and all identities in between. Even more so, it’s for anyone who can handle laughs that won't stop coming.

Gunner Wilkes doesn’t believe that Horatio Slice, his favorite rock star, died two years ago during a concert. Extensive research convinced him that Horatio actually disappeared through a portal into another dimension. Gunner uses his college education and skills to build a device to return Horatio to Earth. The rock star appears naked in Gunner’s room. Sex and hilarity ensue.

This book pulled me in right from the beginning and kept me riveted until the end. Though I was tempted to read in one sitting on a long flight, I decided it was better to pace myself and prolong my visit with Horatio, Gunner, Snake Vinter, a sexy vampire pirate, the identical oompa loompas, and a motley assortment of delightful characters, human and alien.

This highly imaginative, amusing, engaging, and wildly adventurous story is totally full of steamy hot man sex, but there’s a whole lot of love here too.