Merry Christmas To All, and To All a Good Night!

Working in a library, I come across a wide variety of books. Lately I've read several charming Christmas books for children, which I will happily share with you on this festive day. -- Diane K. M. 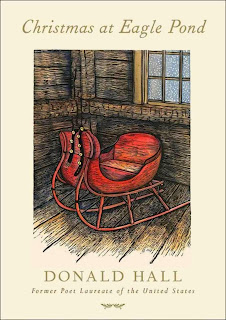 Christmas at Eagle Pond by Donald Hall
2012
My rating: 5 out of 5 stars

This is my favorite Christmas story. It is a lovely novella about a boy visiting his grandparents' farm in New Hampshire during Christmas in 1940. Donnie helps with the chores, makes popcorn balls to decorate the tree, listens to his grandfather's stories and gets to attend the church's big Christmas party.

On Christmas Day they have a feast -- everything but the salt and pepper came from the farm -- and they share more family stories. And because there was plenty of snow, Donnie is even treated with a sleigh ride!

This book brought back fond memories of Christmas visits to my grandparents' farm when I was young, and if my grandmother were still alive, I would share this wonderful story with her.

Be sure to read the author's note at the end, for it makes the book especially sweet. 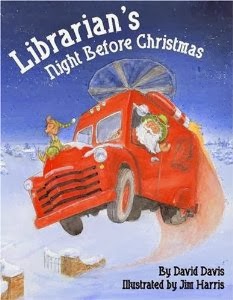 Librarian's Night Before Christmas by David Davis
2007
My rating: 4 out of 5 stars

This is a cute book about a librarian who has to spend Christmas Eve working at the library. She's toiling away, shelving books and mending torn pages, when a red bookmobile driven by Santa appears! Santa and his elves jump out to help her.

"Nick was jolly and droll; a white man crowned his head,
And I could tell by his diction he was very well read.
'This place needs some cheer, so let's make a start.'
Then he whistled in elves pushing loaded book carts.

They stocked Hawthorne, Jane Austen, Steinbeck, and Millay,
And for the more macho, they supplied Hemingway.
They shelved new science fiction and tomes from the past
And sneaked in romances for sweet Molly McNast."

After restacking the books, reading to children and enjoying some hot chocolate, Santa and the elves get ready to leave.

"Nick winked at the cat as they dashed down the aisles
And yelled, 'Happy reading, you bibliophiles!'
He loaded his crew and sang from the yard,
'The best gift of all is a library card!'"

The drawings are lovely and festive, and I would recommend the book to any parents wanting to spread some bookish cheer with their kids. 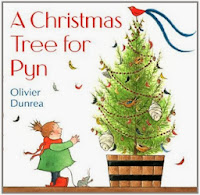 A Christmas Tree for Pyn by Olivier Dunrea
2011
My rating: 4 out of 5 stars

This is a marvelous Christmas story for children. It's about a mountain man named Oother and his daughter Pyn, who is excited to have her first Christmas tree. But first she has to convince her papa to get a tree -- he is resistant and frankly, a bit grouchy about the holiday. He doesn't even like Pyn to call him Papa -- she calls him Oother.

Finally, when he picks up his ax and goes out into the woods, Pyn tries to follow him, but the snow is so high that she needs help. Oother picks her up and they march into the woods to find the perfect Christmas tree. When they get it home, Pyn shows Oother how good she is at decorating it, and Oother surprises her by having a beautiful topping for the tree. The pictures are wonderful and Pyn's joy jumps off the page. I wanted to pick her up and give her a hug. The sweet ending brought a tear to my eye. Highly recommended! 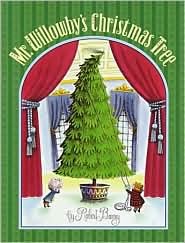 I think children will enjoy the delightful pictures and the series of homes where the tree ends up. The book was first published in 1963, and it is a classic Christmas story, complete with lots of sharing, joy and an ending that refers to the beginning. It's the tree that keeps giving!

Posted by DianeLibrarian at 5:00 AM No comments:

The Long Walk by Stephen King
My rating: 4 of 5 stars

Every year, 100 boys take part in a nightmarish pilgrimage called The Long Walk, the winner receiving The Prize and a ton of cash. Ray Garraty is one of the contestants. Will he win The Prize or be one of the ninety-nine dead boys on the road?

Wow. And I thought the six mile hike I went on in October was rough. Imagine walking non-stop, day and night, and getting shot if you stop too long? That's the horror of The Long Walk.

Unlike the Hunger Games, this book is pretty brutal. Imagine having to go to the bathroom in front of a crowd of spectators while continuously walking. And never being able to sleep. And seeing people gunned down in front of you after they've been warned three times. Like I said, pretty brutal.

As usual, Stephen King crafts an interesting cast. Garraty, McVries, Stebbins, Barkovitch, Scramm, the list is pretty long for a short book. Part of the brutality is that you don't know whose ticket is going to get punched next.

I really wanted to give this a five but I couldn't. My lone problem with this one was the dialogue. So many of the boys sounded like they were in their twenties or thirties rather than being teenagers. Usually, I find King's dialogue a lot more realistic but it pulled me out of the story a few times.

4.5 out of 5. I'm going to track down more of these Bachman books of King's now.