But It Does Have a Beautiful Cover 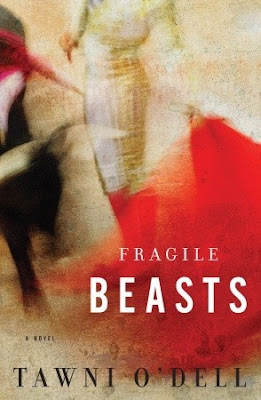 When I read Tawni O'Dell's Coal Run a few years ago, it became an instant favorite.  So I was certain that I would love Fragile Beasts. I hate it when I'm wrong.

Set in Pennsylvania coal country, Fragile Beasts tells the story of the wealthy and reclusive Candace Jack, a woman who has tried to recreate the Spain of her youth in the remote mansion where she makes her home.  Her obsession for all things Spanish begins as so many obsessions do:  with a loss.  The love of her life, a Spanish bullfighter, is killed in the ring, leaving Candace to forever mourn what could have been.  Understandably, the town sees her as the crazy old spinster lady that nobody ever sees--although, in lieu of cats, she keeps a bull.  That's right.  A bull.  She bought the bull that killed her lover and has always kept one bull from each generation of his progeny.

So, we have an old woman nearing the end of a life created from walling herself off from her own emotions and from other people.  We've been here before.  There's only one thing to do:  create a plot device by which she is forced to interact with a young person who is damaged himself/herself and through this unlikely pairing, both will be forever changed.  In this case, Candace agrees to take in two teenage boys who have recently lost their father in a drunk driving accident.  Their mother left years ago and is clearly an unfit parent, even though she returns to collect the boys and move them to Arizona.  Candace reluctantly agrees to take the boys in mainly to spite the mother, to whom she takes an instant dislike.  The rest of the novel follows the uneasy relationship between the two boys, Kyle and Klint, who are coping with the death of their father, and Candace, a woman whose motherly instincts are non-existent.

The main issue with the book is that there is simply too much going on.  There are two stories, one set in the past during Candace's experiences in Spain and one in the present.  The present day story is narrated from 3 points of view:  Candace, Kyle (the sensitive, more emotionally open boy), and her Spanish butler/friend, Luis.  However, the "voice" between these three perspectives isn't varied enough.  Kyle in particular seems inauthentic as his chapters don't always read like that of a young teenager.  Sure, he's mature for his age, but I've never known a teenager to be that insightful.  Candace Jack is exactly what one would expect of a wealthy older woman--always concerned with the proper way of dressing, speaking, eating, behaving, etc.  If she had been more salty and cantankerous it would have given the novel more energy and perhaps more suspense.  She has flashes of humor, but they're sparse.  These first person points of view also lead to a lot of telling and not showing.  Most of the chapters are presented as internal dialogue in which the character reflects on the progress being made in forming the tentative bonds that may eventually bring them together as a family.  Instead of reflections, I would have preferred to see more in the moment interactions between the characters.  The Luis chapters serve primarily to explain what happened in Candace's life decades ago.

Despite its predictability and its flaws, there are some compelling moments, some witty dialogue, and I admire O'Dell's refusal to shy away from the dark corners of life.  For me, the back story of Candace and the bullfighter are the most interesting, as are Luis's stories about being a boy in Spain.  These stories made me wish an entire novel had been dedicated to Candace's youth.  As it is, the competing storylines never seem to get the breathing room they need to come alive.
Posted by Amanda at 10:55 AM No comments: The Publisher Says: The battle has been fought and won, and all have been transformed by the struggle. Imago of Lockwood has become Lord Mayor of the City Imperishable, though at a price beyond his wildest imagination. Bijaz the Dwarf has been imbued with a godlike power and a responsibility he scarcely understands. And Jason the Factor, resurrected from death at the hands of his sister, the Tokhari sandwalker Kalliope, has become the sula ma-jieni na-dia, the fabled Dead Man of Winter. When a beautiful mountebank arrives in the City Imperishable, offering to lead an expedition to uncover the lost tomb of the Imperator Terminus, she stirs up the mob with promises of treasure and imperial power... but what will her quest unleash? Political intrigue, adventure, and all-out war await the principles and inhabitants of the City Imperishable. Through it all, the City may endure, but none will remain untouched by the Madness of Flowers...

My Review: Oh damn. This is the last book set in the City Imperishable. No more adventures for Bijaz the newly minted demigod/dwarf, no more cruel rivalry between the Sewn and the Slashed...

I will miss annoying Jason the factor. I will miss obnoxious Imago the Lord Mayor, who gave me my new favorite blasphemy: "By Dorgau's infected nostril!"; and Bijaz most of all. Bijaz, now possessed of startling powers he spends most of the book learning how to cope with:


A thought came unbidden to his head. Enough fire. Transformation was easier than heat and light. His fingers brushed tons of paper. From the madness of insects he would make instead a madness of flowers.
With that, it was done. The paper exploded in roses the color of light and flame, twisting in a whirlwind as the reaper touched Bijaz's shoulder to claim back his fragment of the sun.

I will miss the cadence of speech that Lake created for his barbarians, the Winter Boys: "I am to be receiving ever more pointed letters from the south," the mercenary commander added. "Higher authority is to be calling me home." It rolls and swirls, this dialect, it feels natural and suggests the difficulties of speaking a language whose rules aren't in your bones. And yet it's not phonied up pseudo-archaic claptrap. Yeah, me likee.

I confess that Kalliope, sister to Jason the factor and a sandwalker/desert mage, made a pretty big dent in my enjoyment of the book. She was such a superior, self-satisfied character that it was hard for me to warm to her. When she meets Bijaz after he gains his startling new powers, her greeting is, "Must you hide in these ridiculous places?" Shades of Hermione Granger the Swot! And then, mere moments later, she utters this ponderous and condescending line: "To whom does a godling pray?"

I want a baseball bat and five minutes alone with her.

But that's part of the magic that Jay Lake weaves around me in this book, this pair of books. I care about the people I've met in the City Imperishable. I like some, don't like others, am constantly reassessing my responses to all of them in light of what they've done and what they're doing now...I respond to them, in other words, as people, not plot-forwarding devices.

Many, if not most, fantasy novels I've read (not a huge number) have the fatal-to-my-pleasure problems of Speechifying, giving long (or longer than my interest lasts, anyway) disquisitions on the whys and wherefores and whosomevers of The Problem or The Quest we're here to learn about. I think of it as the Robert Louis Stevenson Disease: Explain explain explain action recap. Repeat ad infinitum.

And then there's the other fantasy novel failing, the Stock Character on the Stock Quest: Teenager with Special Hidden Powers meets Cutesy Sidekick, is thrashed by Evil Villain, recovers in Hidden Hovel with Obi-Wan Kenobi, and emerges to Thwart Evil Villain and become Super Ruler. Or whatever small variation on that theme and those characters the author has rung. Yes, yes, all quest novels are versions of that story. Put some effort into hiding it! Distract me and engage my attention elsewhere, so I'll trot along behind your people as they go through the paces, smiling instead of sighing.

That's what Jay Lake did in his creation of the City Imperishable. He recapitulated eleventh-century Byzantine history mixed with the iconic Star Wars quest and made me, the most cynical non-fantasy reader ever, like it. He did it by making me invest in people, believe their eccentricities were real and interesting, and told me enough about the world they live in for me to know that it wasn't my world but one a bit more interesting.

This work is licensed under a Creative Commons Attribution-NonCommercial-ShareAlike 3.0 Unported License.
Posted by Richard at 2:30 AM No comments: