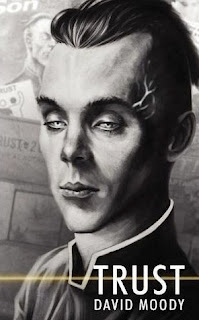 David Moody fans (or sci-fi junkies) will be pleased to note that this title is currently available online for free. And it's pretty damn fine. Not as strong as Moody's Hater, but perhaps it isn't even fair to compare the two because in a lot of ways they are very different stories.

Imagine if you will your average particle accelerator -- the Hadron Collider if you please. But instead of smashing sub-atomic particles into one another, let's say you're David Moody and you decide you want to take Shaun of the Dead and violently crash it into M. Night's Signs and Spielberg's Close Encounters of the Third Kind until you're left with this existential, entertaining mash-up of a story that's reflective, funny, and chilling in its probabilities.

Tom Winter is your average English bloke who has left his high pressure job in the city and retreated to the very small coastal town of Thatcham. His parents have recently died and he and his younger brother are trying to put their lives back together. Into this small town an unidentified aircraft of behemoth size deposits aliens from an advanced civilization. They claim they have come in peace. They claim they only want our help to get home. But are they telling the truth?

Moody is not giving us an action-packed, pulse-pounding story about an alien invasion here; rather, he's focusing on the psychological and philosophical ramifications of human behavior in the face of a peaceful close encounter of the third kind. It's pretty interesting actually the way characters behave, how they gradually grow to accept the aliens as non-threatening visitors, the questions it makes them ask of themselves and of one another, the deep desire to weigh in on meatier moral issues and "the meaning of life."

It's a slow build that did feel like it goes on a little too long in parts. I started to get a bit twitchy. I just wanted something to happen. In a way, that's very effective writing though. If the aliens do land in peace and it turns out to be pretty innocuous and ordinary, our human reactions might very well be to wish for something more outlandish and mind-blowing. This can't be all there is? Surely, there's something else to occur.

When the direction of the story does change, it happens abruptly and is over quickly. I guess I wish there had been more of a balance between the first three parts and parts four and five. That's not to say I didn't enjoy it or that I don't appreciate what Moody is trying to do here, I just longed for more B-movie action and less navel-gazing character angst.

For more of an adrenaline punch to the solar-plexus, definitely check out Moody's Hater trilogy.

This review is also posted to Goodreads.
Posted by Trudi at 1:38 PM