Do you believe in aliens? 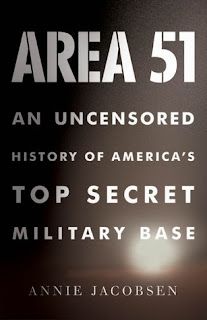 "Wow!  It sure is hot in the desert.  Hey, why does that rattle snake have two heads?"

"Oh, hello…I didn‘t see you there, just talking to myself and the snake---s.  I’m Stephanie, and who are you and what are you doing in the middle of the Mojave Desert?"

"I could ask you the same thing.  I’m Annie Jacobson, I wrote a book about Area 51.  It’s just over the hill there."

"The hill with the two Hummers on it?  Hey, and there seems to be a couple guys with guns…..uh……pointing in our direction."

"Yuup, but it doesn’t technically exist."

"Yes, I talk about the Roswell incident a bit in the beginning of the book, but then I get into all the crazy military secrets.  What I mean by Area 51 not existing is that it has always been a Black Operation, which means our federal government denies it existence even though it sits right over there……as you so astutely observed."

"Thanks! So you mean the President and the rest of the government, close their eyes, stick their fingers in their ears and go LALALALALALA………..?"

"Kind of, but not really.  No president has ever “known” about Area 51.  Vannevar Bush, the engineer that was the primary organizer for the Manhattan Project started up Area 51 because he believed some things are on a need to know basis, and the president just didn’t need to know.  In fact, whoever works at Area 51 is on a need to know basis.   You only know about your specific field of work and that’s all.  I guess no one in that place knows the whole story."

"Did you say Vannever BUSH?  Oh god!  Those Bush’s are freaking everywhere and they ruin everything!  This explains so much……"

"There is no evidence that Vannever and W.  Have any familial ties.  Relax Stephanie."'

After WWII the United States government recruited Nazi scientists, because they were the best in the world, forgave all their odious crimes and set them up with pretty swanky jobs at Area 51.  This was called operation Paperclip.  The Soviet Union recruited some of their own.   Joseph Stalin used them to come up with some inventions as well."

"Uuck!  We had known Nazis on our soil doing god knows what………and we called it Operation Paperclip?  That doesn’t sound very intimidating.  Why not Operation Commando Eagle or something like that?  What were they up to anyway?  Investigating aliens, right?"

"Commando Eagle?  Isn’t that an Eagle without underpants?........ Anyway, they were doing all sorts of things, mostly testing nuclear bombs.  Bomb after bomb after bomb…….it’s a wonder the planet is still intact.   It’s a damn miracle any of us are alive.   For one of the tests they put a bunch of sheep, rodents, and 109 beagles in cages, blew up a bomb to see how it would affect them.   Turns out, plutonium is only lethal if inhaled; you can touch it, no worries.  The aliens, yeah, sort of……I tease about them again in the middle of the book to keep you reading."

"Awe, 109 beagles? They wouldn’t do that kind of crap today; PETA would be all over their ass!  By the way, teasing isn’t nice Annie."

"I know, I’m getting to it.  Couple of interesting tid bits I need to share first, when they tested some manned rockets they noticed a bunch of black dots high in the atmosphere.  It freaked them out until they found out they were dead bugs blasted so high in all the thermal nuclear bomb tests they were sent into orbit.  One of the scientist at Area 51 was known for inventing something  that kept the astronauts penises from freezing to the urine tube when they had to pee……….and they had this spy operation they called Acoustic Kitty, where they implanted listening devices in cats, that didn’t work out so well…..and…….."

"ANNIE!  The little grey men please.  By the way, since this stuff is mostly classified, how do you know all of this information?"

"I interviewed one of the original Paperclip scientists for a year right before he died".

"Ever heard of Occam's razor?"

"Yeah, given a bunch of solutions to a problem, the simplest one is the most plausible one."

"If you decide to read the spoilers beyond the break below you will find out why we can’t have nice things Stephanie……."

"Thanks Annie,  I’m scared, I think I peed myself a little. I think I'll go home now."

The War of The Worlds radio broadcast caused a huge panic amongst the American public.  Aliens creeping out of crashed flying saucers and wreaking havoc sent people running.  This did not go unnoticed by Joseph Stalin in the USSR.  Pissed at our president for making him look stupid (Stalin could barely read) , he got an idea for revenge from the War of The Worlds fiasco, he had his Nazi scientist invent a flying saucer using electromagnetic field technology.

Dr.” Josef Mengele, a super nasty evil Nazi, experimented on human beings (Jews, gypsies, and mentally/ physically challenged people) in the most hideous ways.   He would remove their eyes and transplant new ones.  Removed the skulls of children and replaced them with adult skulls, and injected them with chemicals to make their hair fall out.  All this is well documented with sketches and plaster molds.   They look a lot like the Greys.

Stalin, the evil bastard, took these kids and put them aboard a flying craft of some sort.  Then he took a big plane and launched both the saucer and the other craft from the plane over the US (they came via Alaska).   So there were two crash sites in Roswell, one with the dead and dying children and the saucer.   Stalin’s goal was to start a panic like the one started with War of the Worlds.  It almost worked, but the government stepped in and covered it up, but not for the reasons we thought.  They took the saucer and the kids to Area 51, after a trip to Wright Patterson air force base, and reverse engineered the saucer."

"But why don’t we have flying saucers then?  I think we do.  Those are the UFO’s that are constantly spotted.  Made right here in the USA.  And they say we don’t make things here anymore."

"This Paperclip engineer also told me that we did our own experiments on non consenting human beings for years, all the way up to the 1980’s.  He also said what he told me was only a very small part of what has gone on in Area 51……and what’s still going on."

"This sounds farfetched I know, but I believe it.  It makes more sense than a bunch of aliens from another world crashing on our planet."
Occam's razor.